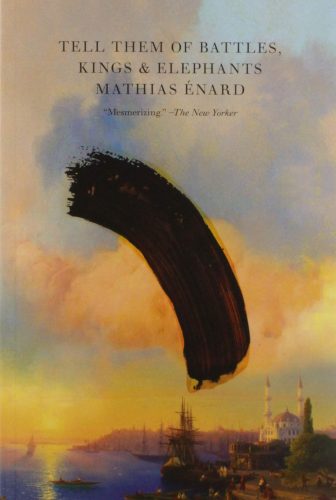 An alternate history usually inserts an element of fantasy into a historical time period, but Matthias Enard’s dense novella Tell Them of Battles, Kings, and Elephants—translated into English by Charlotte Mandell—merely wonders: what if Michelangelo Buonarroti had created art on the other side of the Mediterranean, in the Ottoman Empire, instead of at Rome? Appropriately enough for a book about a bridge between Europe and Asia, speculation here provides a beautiful space where the Italian Renaissance meets Ottoman palaces. Frustrated by Pope Julius II’s apparent disinterest in his projects in Rome, Michelangelo accepts an invitation from the Ottoman Sultan Bayezid II to visit Istanbul and design a bridge crossing the city’s harbor, the Golden Horn. While initially finding a haven for artists, Michelangelo eventually comes to realize that the politics and greed which he thought himself to have left behind in Rome rot this city as well. Michelangelo’s time spent in Istanbul marries Enard’s tangible research with much speculation, as well as musings about the clash of cultures in art, beauty, and love.

Any fiction that adopts a historical figure as a hero must, like a good biography, work around their fondness for the subject and not try to justify every flaw and poor decision they may have made. Michelangelo here hovers gracefully in the balance. He avoids the didactic poverty of the pure artiste, and spends a large portion of the book seeking more money. Michelangelo leaves Italy in the first place because the Pope either cannot or will not pay him to complete the papal tomb. He frequently needs to write home to assure his brother that his debts will be paid. However, Michelangelo’s reactionary outrage stems from a devotion to beauty obvious to anyone with knowledge of the Sistine Chapel ceiling, the Pieta, or David. In Istanbul, he remains wary of the overtures by the Sultan’s court, yet naive enough to fall in love-at-first-sight with a beautiful dancer. Michelangelo also falls completely in love with a culture so new to him and immerses himself in the city; eventually, he designs the grand bridge that the Sultan commissioned from him.

The world that Michelangelo inhabits reflects a real-life world also and not an idealized past. While presented in the midst of a male cast, Michelangelo and the people he meets on his journey live in a world where Andalusians mix with Turks and Greeks and alongside Florentines and Silicians (generically known as “Franks” to the former groups). Michelangelo takes pride in his hometown of Florence and, despite nightmares of Savonarola’s brief reign, always assumes he will return home eventually. In either Florence or Istanbul, however, Michelangelo sees the world in lists of images that he keeps in notebooks, and the sparse, striking images in the prose reflect the artists’ eye for the visual. These notebooks exist to the present day, as does a dagger that surfaces later in the plot, and several drawings of the bridge in question. The veracity of these artifacts provides a clear window, not only into the time period, but also into the artist’s thought processes. The wonder with which he describes any object, from groceries to exotic animals to the Sultan’s turban, reveal how susceptible Michelangelo is to beautiful images.

In this regard, Istanbul holds wonders whose spell Michaelangelo remains helpless to resist. He encounters elephants and monkeys for the first time, and the Sultan’s agents purchase one of each for him. His pious Catholic soul requires him to pay homage to that great former church, the Hagia Sophia, even with its icons and crosses covered over. In this lovely moment, Michelangelo’s awe of the beautiful architecture completely overrides any misgivings he might have about its conversion into a mosque. At this meeting of living icon and iconic architecture, Michelangelo really commits to the plan to build a bridge, but the most complete immersion into the Ottoman world occurs in the taverns. Michelangelo’s guide in Istanbul, a Turk named Mesihi, takes him out on the town for some entertainment, which includes watching those Andalusian dancers. The Andalusians, either Muslims or Jews driven out by the Reconqusita, certainly do not share Michelangelo’s Catholicism, but Michelangelo finds the dancing of one of them so enticing that he returns to watch them again and again. Eventually, Mesihi arranges an introduction for the dancer, whose name never comes up, and she becomes Michelangelo’s lover.

Michelangelo has a reputation for celibacy, and he seems to have been completely devoted to his work. No historical accounts exist of him sharing physical intimacy with a wife or a lover of either sex. Yet, Michelangelo expressed great admiration for both male and female individuals during his life,  especially in poetry, and the Michelangelo who travels to Istanbul expresses no misgivings about his dancer lover potentially being a man, but he certainly expresses no disappointment when she reveals herself to be a woman. However, his male guide in Istanbul, Mesihi, has an unrequited crush on him that totally that baffles Michelangelo. Mesihi’s love for Michelangelo stems from his respect for the man, his personality, and his talents—and it develops as the two get to know each other. Mesihi’s attraction could be the basis for a healthy relationship, but it remains completely foreign to Michelangelo. Michelangelo does not see love in the same way as the rest of the world does, connecting it to beauty and gracefulness, and not a physical act. He only considers himself to be in love when he plunges in headfirst, in total devotion to subject. Additionally, no love can really be sincere to Michelangelo without connection to art.

Indeed, everywhere that Michelangelo goes in Istanbul, he seems to see a connection to the arts. Beauty drives Michelangelo and causes him to seek solace from the world, and so many of the conclusions he draws on his travels come from ideas that he already had. Michelangelo’s views on the world surface in many different kinds of art. About draftsmanship, the wonder that Mesihi and the other Turks show toward his prowess confirms the practice and space needed to produce breathtaking everyday sketches, let alone the kind of blueprints needed to build a bridge.

Architecture puts Michelangelo at odds with his rival, Leonardo da Vinci, whose bridge design the Sultan had already rejected. Mirroring the balance of functionality with artifice, Michelangelo assures the Sultan that the bridge he designs will also look good in addition to crossing the Horn. However, Michelangelo’s knowledge of the science behind design goes into a knife he commissions while in Istanbul. He goes to lengths to ensure the quality of the steel and the soundness of the physics behind its use. Michelangelo’s full comprehension of the arts seems, however, to run out when it comes to dance. The motions and physics of dancers mesmerize him with their beauty. The mystery behind the dance obscures Michelangelo from the politics involved with his every move, more so than any of the other arts. Michelangelo’s foreign nature in Istanbul is made most clear in the absence of his greatest passion, sculpture. Michaelangelo’s separation from the chisel represents his true isolation in a land of dangers.

Isolated and in want of sufficient knowledge, Michelangelo remains in danger from temperaments like those he left behind in Rome. Politics continue to get in the way of Michelangelo and the money he needs for the necessities of life: for example, he discovers that he actually needs to relinquish blueprints in order to get his commission. While not an unreasonable request, the Sultan pays him with the lordship over a town in Albania rather than real money. This angers Michelangelo, who has only just walked out on the Pope for refusing to pay for his work in Rome. To make matters worse, the dancer he loves attempts to assassinate Michelangelo in a plot tied to the intrigues of a succession crisis in the Sultan’s household.

Michelangelo thus leaves Istanbul not quite in defeat, but frustrated for having escaped only foreign politics rather than domestic ones. His pet monkey dies, and with it the grand adventure that he originally set out upon. Of course, history soon erases most evidence of his time spent in Istanbul: the Sultan’s abdication is forced by his son, and a great earthquake destroys what little of the bridge had been built. This relatively clean ending would feel a little too nice, if not for the actual historical accounts of precisely such a geological event.

These strong historical roots serve more generally as a measure of restraint on the speculation that sets Tell Them of Battles, Kings, and Elephants apart from mere wishful thinking. Instead, Michelangelo’s short journey in Istanbul asks questions about the way that artists think and the effects art can have. The wonders that Michelangelo sees in Istanbul hit home fully, throughout the explorations of art and love that he inspires. The politics that shape Michelangelo’s era seem both to feed and attempt to extinguish his artistic talent, as does his own devotion to aesthetics. The Sultan and the Pope both capture Michelangelo’s imagination with their requests, but Michelangelo himself places so much faith in them and their worlds that disappointment drives him to extremes. Enard has used historical fragments to construct a narrative that uses the question “what if” in an innovative way, asking not only about what has happened, but showing both the positives and negatives of what did happen, to question the ability of the artist to survive in a practical world.

Like Loading...
© Copyright 2019 By: Aaron Heil
About Aaron Heil
Aaron Heil lives with his wife in Emporia, Kansas, where he is an MLS candidate at Emporia State’s School of Library and Information Management. His prose has also appeared in The Cleveland Review of Books, Corvus Review, and elsewhere. He regularly blogs for The Game of Nerds.
No comments yet. Be the first!