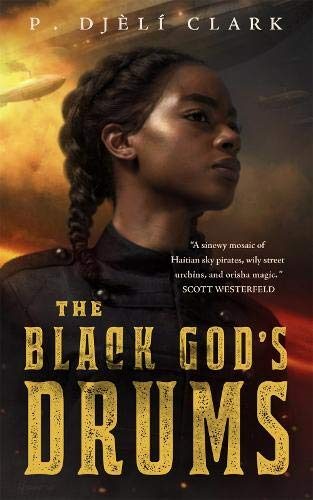 P. Djèlí Clark’s debut fantasy-alternate history Afrosteampunk novella features a young teen lead, which, together with the general pitch of the whole narrative, puts The Black God’s Drums firmly in the teen/YA category. In the brief space of a hundred pages, Clark successfully combines Haitian mythology, magic, and a rich real and fictional history of New Orleans, while keeping the reader entertained with a lively cast of characters even in an otherwise typical plot.

The alternate history takes place against a broken United States where the Civil War rages on, and is set in New Orleans, a neutral city between warring factions. In this narrative, the Haitian revolution has led to the formation of a grouping of free Caribbean states, and New Orleans operates as a neutral and open port. The protagonist is Creeper (Jacqueline), a 13 year old urchin who lives on the streets as a pickpocket. She is also a conduit for Oya, an Orisha of storms, who speaks to her, sends her visions, and dictates aspects of her life. Following one such vision, Creeper discovers a plot by Confederate schemers to unleash a mysterious weapon invented by a Haitian scientist, known as the Black God’s Drums, a.k.a. Shango’s Thunder, and turn the tide of the American Civil War. She trades this information with pirate captain Ann-Marie St. Augustine—who in turn is guided by Oshun, an Orisha of rivers—in order to get passage on her pirate airship the Midnight Robber. Together, the two of them decide to take on the Confederates and the even more extremist Jeannots, aided by the crew of Midnight Robber and two very cool nuns (from the order of The Sisters of the Holy Family) who watch over the city, and who provide them with the tools to locate and fight the evildoers. The narrative follows this basic adventure script to a predictable ending, with a well-written climax where the two goddesses combine their powers to stop the weapon from destroying New Orleans. There are gunfights, fistfights, magic fights, stormy sea battles, airship battles, and daring rescues. The mood of the novella is light, even if the contexts and themes the novel evokes are not: these include the American civil war, the spectre of slavery, and child prostitution.

While the novella is very much its own thing aesthetically, especially with its Afrosteampunk worldbuilding, that the plot echoes a long history of YA adventure fiction is unmistakable—for instance of Stevenson’s Treasure Island (1883), starting with Ann-Marie with her metal leg as a more radical and positive gender-flipped Long John Silver to the teenaged Creeper. Where the novella really shines is in its portrayal of the individual characters. Both Creeper and Ann-Marie feel trapped by their natures. Creeper does not want her visions or the presence of the goddess, even though it is useful for her trade. Her wish to escape her birthplace aboard the Midnight Robber is so she can also put this part of her life behind her. To Creeper, Ann-Marie is the embodiment of that escape, someone who lives a life of adventure. Yet Ann-Marie’s choice is a deliberate one as well, a wish to escape from the blood that runs strong in her.

“My grandmother say Oshun can show me secrets in those waters, learn me how to heal and make people love and laugh.” She snorts. “But that not what I want to do with my life. I make up my mind that no goddess ruling me. When I big enough I run from that river, away from that sweet song.” (p. 76)

As an airship, the Midnight Robber is the furthest away from the river that she can get it, travelling not only horizontally but vertically, above the river, not on it. There is a dual historical trauma here to be relieved with the choice of adventure. There is the trauma of the sea, the journey from one world to another by force, the Middle Passage, the transatlantic slave trade, and the settling of the Americas, which makes New Orleans a well-suited site for the novella. Then there is the trauma of one’s own split self, caught between a narrative of self-determination and of being the plaything of more powerful forces. The real magic here is legacy, it is a history and a bloodline that is not erased but that which is carried over from one world to another, one generation to another. Both central characters ultimately come to understand that magic, that is, one’s real strength, can come out of that that legacy, and the novella closes with that realization.

This legacy is particularly important both for the worldbuilding and for the politics of the narrative. The Civil War, whose continuation forms the basis for the steampunk setting, is a still-breathing history in the real world, as evidenced in the Trump era with the re-emergence of Confederate flags to the political and rhetorical space. To imagine a counterpoint to this politics and rhetoric, there is a need to reframe the history of the region in terms of black—or indeed, multiracial—history. There is, even more, the need not to bury the past but instead use it, wield it, like magic, like anger—indeed like the storm of another Haitian revolution. The novella’s most interesting steampunk object is not the Black God’s Drums, a cannon-like weapon that creates storms, but the artefact called “Drapeto Gas” which can turn people docile, “keep them from running away or rising up”, and is used by the Confederacy on the slaves. The Drapeto reference comes from the hypothetical disease of “drapetomania,” which made slaves seek freedom by running away, a racist medical formulation advanced by the American physician Samuel A. Cartwright. In Clark’s narrative, slaves are fitted with masks connected to canisters of the gas, which keeps them in the docile state. There are obvious steampunk and dieselpunk aesthetics being evoked here with gas masks, and the political imagery of medical experimentation on black bodies and, much later, Jews in the Nazi era. However, the narrative also overturns the trope of experimentation; Creeper and Ann-Marie deploy the gas against their enemies during the final scenes as they try to rescue the Haitian scientist and his daughter.

In spite of all the allusions to real historical events, the text flows smoothly and never strains under the burden of transmuting history in its alternate New Orleans. There are three main reasons why Clark’s prose simply works: the first is the consistent humor, especially in the scenes between Creeper and Ann-Marie, the latter not only a role model but also a mentor for the young girl. The humor is also enhanced by an incongruity that, even though expected for the genre, still works in a short novella; for example the nice nuns being the keepers of drapeto gas and watching over the city (for me, as a reader, there were hints of the narrative of the landmark steampunk Thief games, for instance). The second reason is the careful use of creole, which gives the narrative an immediacy in speech and tone. Finally, and perhaps most importantly in terms of genre, the magic never seems forced as an external element, a language that needs to be learnt, but something that is part of a way of being and living. The novella’s epigraph, “To those who survived the crossing, and who carried their Black gods with them,” carries the burden of the history of slavery as well as the history of magic and myth, and the two are thoroughly intertwined. In my other work, I have used the concept of the “mythologerm” to describe how postcolonial science fiction generally negotiates the mythic through the scientific, but in certain speculative narratives the reclamation of myth itself is a means to reclaim history.[1] Clark is able reclaim myth and magic successfully, and believably, for an alternate New Orleans. It seems a waste to let such a fantastic world be contained by only one novella, and I do hope we will see more adventures from Clark set in this world.