Reviews
Size / / /
The Djinn Falls in Love & Other Stories, edited by Mahvesh Murad and Jared Shurin
By: Arkady Martine 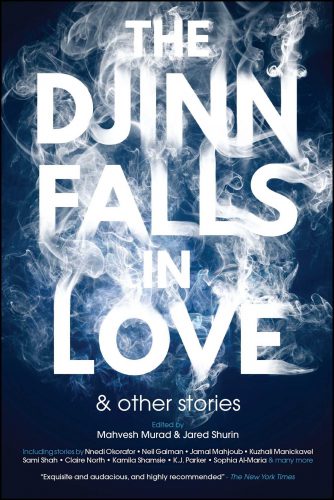 This collection, which comprises twenty-one stories and poems on the theme of djinn, is a lovely and complex contribution to the speculative literature of the folkloric supernatural and its interpenetration into the world. The editors cast a wide cultural net, which is reflected in their choice—discussed in the editorial introduction—to not standardize the spelling of “djinn.” “Jinn,” “djinni” and “genie” are equally present in this volume, and the authors are not only international but work within varied traditions and conceptions of djinn. As well, the editors have chosen (after, they tell us in the introduction, much struggle) an evocative title: The Djinn Falls in Love is not merely a collection of djinn stories, but a collection which explores the difficulty of empathic understanding between two sorts of beings alien to one another. The djinn in this volume love humans, or are loved by them, or fail to love them, or love nothing but wishes (or wish to love nothing). The stories are marked by a thematic coherence of reaching out, reaching toward, that barrier between the supernatural and natural worlds becoming transparent. The wish-granting djinni—or the profoundly other human, for a human is as other to a djinni as a djinni is to a human—creates this transparency, a thinning which can be traumatic, a window into otherwise minds. By selecting works which highlight both empathic connection and its fragility, the editors have created a compelling and exceptionally readable collection.

The djinn in these stories are sometimes more human than the humans they interact with (or at least more sympathetic, more individual, and less likely to exploit systemic or individual oppression for personal gain). Several stories are from the point of view of the djinn, and it is these which most clearly demonstrate the near-impossibility of making genuine, longed-for connection—of coming to any actual unmediated understanding of another person. In Kirsty Logan’s “The Spite House,” the djinni is forced to grant wishes: it is her nature to be a wish-granting force in the world, whether or not she wants to be, and this shapes all her efforts to speak with and live amongst humans. Similarly, JY Yang’s “Glass Lights” gives us a djinn-descendant who is alienated from humanity in a very human way—she is marked out by her religion and her color, separated from kind but unaffectionate friends and coworkers, left to contemplate wishing and its uselessness to abrogate pain. Most strikingly, Amal El-Mohtar’s prose poem “A Tale of Seven Birds” describes the repeated transformation of djinn, fallen from heaven (perhaps an allusion to the fall of Iblis, the people of fire cast out in favor of the people made from clay), into seven sorts of birds—but the birds in all their transformations are constantly attempting to defend themselves, the small space of self that they have, from the predations of the borders and nations of a human universe. As much a meditation on statelessness and exile as it is on the nature of djinn, El-Mohtar’s work is one of the sharpest and most eloquent in the collection.

Even in stories told from the more traditional perspective of human beings interacting with djinn, there is a consistent emphasis on the ephemerality and difficulty of connection with alien and un-understandable beings. Nevertheless attempts at connection form the thematic spine of most of the stories. Kamila Shamsie’s “The Congregation” sends a young man in search of his djinn brother, moving between vividly described worlds, both human space and djinn space infused with the same Islam: djinn as close as, and as distant as, family. In Kuzhali Manickavel’s “How We Remember You,” the protagonist recounts how they and their group of friends—humans, all—tormented a young djinni, ruined and destroyed him, with only the barest longing for a lost or never-possible empathy. Only the protagonist, speaking in a first-person plural which yearns in and of itself toward an impossible unity, returns over and over to the place where they locked away a djinni who was ill, damaged, somehow gone wrong; the story is an exploration of how memory is both insufficient and necessary to understanding the other. “The Righteous Guide of Arabsat,” by Sophia al-Maria, is concerned again with human empathic failure: its protagonist, a young man with little to no experience of women save through pornographic images and dire warnings about female sexuality, fails entirely to recognize his new wife as a human being, and can only understand her as a tempting, seductive djinni—that ought to be destroyed.

When the connection between djinn and humans succeeds in these stories, however, they become vehicles to demonstrate the profound hope that is contained within transformation. This reviewer’s favorite story in the collection, Saad Z. Hossain’s “Bring Your Own Spoon,” is set in a peri-apocalyptic future profoundly impacted by climate change, in which both humans and djinn struggle for basic survival, one next to another. In this landscape of deprivation, a man named Hanu has discovered how to cook food that tastes like food, in doing so disregarding the warnings of scientists and government authorities which suggest that all non-synthesized food will be corrupted and poisoned. Along with a djinni, Imbidor, Hanu begins to feed not only himself but his community, creating a restaurant of sorts in the wilderness. If there is wish-granting here, it is equally Imbidor’s—whose small interventions seem to make Hanu’s cooking possible where it could not otherwise be so—and Hanu’s, who grants the wish of his community to be a community, brought together by food and collective memory of a past where food belonged to communities. When the restaurant is threatened by the governmental authorities, Hanu, Imbidor, and their customers are able to strike out into the darkness of possible freedom and deliverance, buoyed by the connections they have made with one another.

The entirety of The Djinn Falls in Love is an expression of its title: it is not about djinn so much as it is about love, about the longing inherent in falling-for, in reaching out to connect with another person, to grant a wish or have a wish granted, and to face the consequences of either. In selecting thematically cohesive stories on these subjects, Murad and Shurin have done the field a service: the djinn are present and with us in speculative fiction, and we merely need to express longing.

Like Loading...
© Copyright 2017 By: Arkady Martine
About Arkady Martine
Arkady Martine is a speculative fiction writer and, as Dr. AnnaLinden Weller, a historian of the Byzantine Empire and a city planner. Under both names she writes about border politics, rhetoric, propaganda, and the edges of the world. Arkady grew up in New York City and, after some time in Turkey, Canada, and Sweden, lives in Baltimore with her wife, the author Vivian Shaw. Her debut novel, A Memory Called Empire, comes out in March 2019 from Tor Books. Find Arkady online at arkadymartine.net or on Twitter as @ArkadyMartine.
One comment on “The Djinn Falls in Love & Other Stories, edited by Mahvesh Murad and Jared Shurin”
Strange Horizons - 2017 in Review Part One By Our Reviewers

[…] in 2017 for comfort—or, put more positively I suppose, for hope. Mahvesh Murad and Jared Shurin's The Djinn Falls in Love was a collection of rare and consistent quality, featuring writers of an array of background and […]