Reviews
Size / / /
The Doomed City by Arkady and Boris Strugatsky
By: Gautam Bhatia 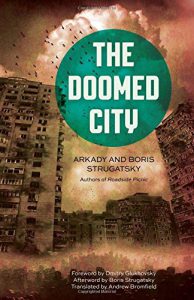 In his Afterword to The Doomed City, which appeared twelve years after the book was first published in 1989, and twenty-nine years after it was written, Boris Strugatsky described the samizdat method of distributing politically explosive texts in the Soviet Union:

We imagined that after the finishing the manuscript, we would type up a clean copy and tote it (with an air of absolute innocence) around to publishers. To lots of publishers. To lots of various different publishers. It would be rejected, naturally, at all these publishers, but first they would be certain to read it. And at each publisher's office not just one person would read it but several, in the usual way. And they would make copies, in the usual way. And then give them to people whom they knew to read. And then the novel would start to exist. The same way as had happened more than once before—with The Snail on the Slope, and with the Tale of the Troika, and with The Ugly Swans. It would be an illegal, silent, almost transparent existence, but existence nonetheless—interaction between the work of literature and the reader, the interaction without which there is no work of literature, and no literature in general. (p. 458–9)

But when the manuscript began to take shape, the Strugatskys realized that what they had written was so explosive that even the samizdat method was too risky. They read their work-in-progress out to each other in their flat, made three copies of the manuscript, and hid it in different cities with trustworthy friends. It was only in 1989, "when the flames of perestroika were just taking hold" (p. 460), that The Doomed City finally saw light of day; and it was only in 2016 that it finally became available to the English-speaking world, through a Chicago Press translation by Andrew Bromfield.

Even through the dense layers of symbolism, allegory, and futuristic speculation, it is easy to see why, despite being written a full twenty years after the death of Stalin, and seventeen years after Khrushchev's repudiation of the Cult of Personality, The Doomed City had to be kept hidden from the public and the censors. The Strugatskys' magnum opus is a novel of doubt and repudiation, almost nihilistically so. A nameless city ("the City") is established by a nameless set of persons called "the Mentors." The City is populated by people from different parts of the world, and from different periods of the twentieth century, each of whom have taken up the Mentors' offer of leaving behind their crumbling existences to take part in a great "Experiment." Settled between an impenetrably high wall on the one side, and an "abyss" on the other, in the light of an artificial Sun that is switched on and off at the behest of the Mentors, the City's inhabitants attempt to eke out their lives in service of the Experiment—whose goals remain hidden, and whose nature is unrevealed.

In the Babel that constitutes the City, we are introduced to Andrei Voronin, a Soviet astrophysicist, along with a motley cast of characters including a non-commissioned Wehrmacht officer planning to take over the City in an armed coup, a Swedish sex worker, an American sociologist, and a gregarious, ironic Jew named Izya Katzman. Voronin begins his existence in the City as a garbage collector, and makes an arduous social climb, pit-stopping first as a police investigator looking into the appearance and disappearance of a mysterious "Red Building," then a compromised newspaper editor during the armed coup that is presaged by a gradually eroding faith in the "Experiment"; later he is a collaborationist administrator in the sometime Nazi officer's new regime, and, finally, he becomes the leader of an ill-fated expedition sent out beyond the City's gates to map the surrounding terrain and ascertain the existence of an imagined "anti-City"—because, as Izya Katzman sardonically observes, "universal experience demonstrates [that] the most terrible enemy is an invented one" (p. 348).

If all this wasn't enough of a provocation to a Soviet regime whose intellectual foundations were built upon a continuing social experiment towards achieving an ever-receding, ever-more-impossible Utopia, The Doomed City is peppered with allusions that even the bluntest of censors could not miss. There is a small-scale version of the Molotov-Ribbentrop pact, brutal apparatchik-led police interrogations, and the closure of opposition newspapers, rendered all the more stark by Izya Katzman's lacerating wit. ("You have to destroy not just the letters that abuse our leader. There are different ways of abusing someone. You have to destroy the letters written by intelligent people!" [p. 242])

And then there are the subtle—and more savage—barbs. In one of the most disturbing segments of the novel, Voronin's quest to find a disappearing red building leads him into playing a surreal game of chess on a life-size board with his personal friends as the pieces, pitted against a "Great Strategist" who is unmistakably Stalin.  Voronin's hesitation in sacrificing "his" pieces to win the game stands out as a powerful rebuke to Stalinist—and communist—utilitarianism in service of an ultimate goal. Soon after that, Voronin enters into a discussion about the Experiment with an old man, who says, "According to every religion—it's forever." A surprised Voronin blurts out, "Religion's got nothing to do with this." His interlocutor replies: "You still think that, even now?" (p. 149). The critique of a messianic belief in Soviet communism filling up the emotional vacuum created by the official State policy of atheism is obvious.

At another point, Voronin finds himself delivering a lecture on greatness to a hall full of silent statues ("Ah, how much has been said, painted, danced, and sung about it! What would the human race be without the category of greatness?" [p. 404]), which soon turns into a full-blown critique of the imposition of order:

“What, let me ask you, has been the stock-in-trade of the most savage tyrants throughout history? They have all, without exception, striven to take the aforementioned chaos, intrinsic to man, that selfsame chaotic, amorphous hnoipekoskankness, and arrange it in decorous order, organize it, institutionalize it, neatly line it up—preferably in a single column—aim it at a single point, and generally clamp down on it. Or, to put it more simply, to do it in. And by the way, as a general rule, they have succeeded! Although, it's true, not for very long, and only at the cost of spilling a lot of blood." (p. 406)

Apart from the obvious target of the critique, it is also interesting to note the treatment of this recurring theme throughout the Strugatskys' oeuvre. As Marat Grinberg points out in his deeply perceptive review of The Doomed City, "the older Arkady and the younger Boris began as devout communist idealists in thrall of the revolutionary Soviet project." This is reflected in their science fiction from the 1960s, and in particular the first few Noon Universe novels, set in a twenty-second century in which communism has triumphed on earth, and spacefaring humans benevolently intervene for the "progress" of less advanced civilizations. But by the time of Hard to Be a God (1964), doubts had begun to creep in. In Hard to Be a God, calibrated intervention—based on scientific Marxist principles—into a society that has progressed up to the Middle Ages goes catastrophically wrong, and there is a lingering feeling that the entire enterprise—of controlled planning of human futures—is askew.

When the Strugatskys came around to writing The Doomed City (finished 1976), the pendulum had duly swung. Everything about The Doomed City is a repudiation of the philosophy that holds that human affairs can be rationally directed to a benevolent end. For instance, in a moment strongly reminiscent of Jean-Paul Sartre's famous play Dirty Hands (1948), one of the Mentors tells Voronin that the recent disappearance of the Sun is "an accident … totally and absolutely unplanned … [but] possibly something will have to be modified somewhat … recalibrated. And so in retrospect—in retrospect!—this 'Egyptian night' will come to be regarded as an integral, programmed part of the Experiment" (p. 234).

Even sharper than the structural critique is the novel's personal one, its depiction of how life in such a world transforms a person from (in Boris's words) "an unshakable fanatic" to "being suspended … in an airless ideological void" (p. 460). Here again, it is through Izya Katzman that the Strugatskys unleash their sharpest critique:

"I can see a man who is ready, who has burned everything that he used to worship, and now he doesn't know what to worship. And you can't live without worshipping; you imbibed that with your mother's milk: the need to worship something or someone. They beat it into your head once and for all that if there's no idea that's worth dying for, then it's not even worth living. And people like you, who've reached a final understanding, are capable of terrible things. A man can blow his brains out, or turn into a supernatural villain—a convinced villain, a principled, disinterested villain, do you understand? Or else even worse: he'll start taking revenge on the world because the world is the way it really is, and doesn't conform to some predetermined ideal or other." (p. 454)

The Doomed City has been called the Strugatskys’ magnum opus, the artistic culmination of a lifetime of politically engaged SF writing that struggled with, survived, and ultimately saw off the censors of Soviet Russia. Perhaps, then, it is in the nature of things that it is both a difficult read, and quite unlike what regular readers might have come to expect from the Strugatskys. But if The Doomed City sometimes risks losing itself in its own labyrinthine wanderings, or suffocating itself in the airless, bleak "abyss" that runs along the edge of the City, it is nonetheless an immensely powerful reminder of the Strugatskys’ unique place in SF history, and their ability—to borrow from Grinberg again—"to make Kafka a tale of truth."

Like Loading...
© Copyright 2017 By: Gautam Bhatia
About Gautam Bhatia
Gautam Bhatia is based in New Delhi, India. When not at his day job as a lawyer and legal academic, he tries to lay hands on the latest works of historical and speculative fiction—with a particular taste for high fantasy and Orwellian dystopias—and read them from cover to cover. He has reviewed before for the Jadaliyya Magazine, and blogs about books at anenduringromantic.
No comments yet. Be the first!