Reviews
Size / / /
The Half God of Rainfall by Inua Ellams
By: Maureen Kincaid Speller 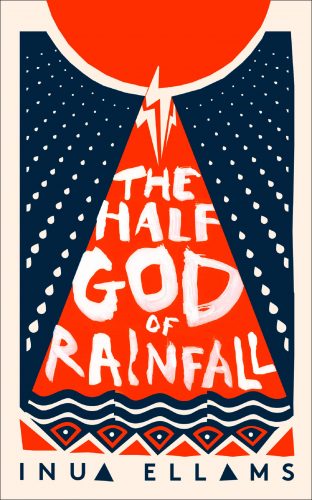 There’s something I’ve never quite understood—the way that cultures for the most part seem to represent their gods as possessing the worst possible characteristics of ordinary people. How are we supposed to respond? By smiling at their oh-so-human foibles, while overlooking the fact that these deities are simultaneously presented to us as exemplars, deserving of worship? It’s not that difficult in such a context to understand the attraction of a monotheistic religion like New Testament Christianity for those scandalised by the brawling antics of the god-family, though this may then explain why so many turn instead to royalty, soap opera, and the Marvel Comic Universe for their daily fix of terrible families.

Take the Greek pantheon as an example (for reasons that will become plain soon enough): Zeus the god-father, who has already committed patricide, is in an incestuous relationship with his sister, Hera, as well as being a serial philanderer and rapist, to boot. “Jealous” Hera mainly divides her time between punishing her consort for his infidelities and punishing his victims for catching Zeus’s eye in the first place. Most of the other gods are hardly more admirable, while those deities who do have a better grasp of how to do the decent thing are generally either punished or sidelined. Apparently, we really, really want our gods to behave badly.

This is not to state anything particularly new, but Inua Ellams’ The Half God of Rainfall prompts me to ponder that question yet again, especially given that we apparently forgive the divine for what we can’t or won’t deal with in daily life.  Inevitably, my English primary school did not equip me with a thorough knowledge of the pantheon of Yoruba deities, though as Ellams pointedly demonstrates in the opening pages of this verse-novella, it is as intricate as that of the Greek or Roman. The names may be different but the roles are often very similar. And, as Ellams shows, these different groups of gods coexist in the world, even if awareness of them has dimmed somewhat with the passing of centuries.

Most of these entities have accepted this philosophically, and do what they can with what they have. Some have found new roles and been transformed, strengthened even, as their adherents have moved continent. Elégaba, Yoruban god of the crossroads, has found a new home in the practice of Santería, while the Norse god, Thor, is doing nicely as a comic-book hero and film pin-up. Others, though, have suffered as their worshippers have dwindled, and none more so than Zeus. As his irrelevance increases, his displays of petulance grow more frequent. His habit of firing off random temper-thunderbolts is annoying the other gods, not least among them Sàngó, the Yoruban god of thunder, whose own palace has been zapped once too often of late. Obviously, the sensible way to settle this is for the two gods to race one another, kingdom against kingdom, the winner to take a mortal from the loser’s world. And Zeus knows exactly who he wants: Modupe, a young Nigerian woman who has been under the eye of the Yoruban gods since the moment of her birth, with everyone aware that she is marked by destiny and consequently in great danger. Osún the river goddess, anticipating this moment, has trained Modupe to defend herself, but Zeus is too much for her (and Sàngó too afraid to protect her); their son, OluDemi Modupe, Half-God of Rainfall, is consequently conceived and instantly born.

As to whether Zeus sounds like any number of twenty-first-century leaders with more power than sense, and a jittery Twitter finger to boot, I couldn’t possibly comment. Ellams doesn’t actually say so out loud, but the inference is plain enough in the juxtaposition of cultural pantheons, with the Greek gods representing a strand of classical culture beloved of various western European and emigrant nations, while the Yoruban gods necessarily stand in for colonised African cultures, not to mention those enslaved in what we now call the United States.

And it’s clear too in the predicament of Modupe, single mother, left to deal with a small child, a part of two cultures yet not entirely belonging to either. How do you cope with a small god-child whose primary power is that of summoning water with his tears? “OluDemi cried small seas / that gushed from his cot and nothing first-time mother, / lone parent, abused girl Moduple did appeased.” OluDemi’s difference will become increasingly obvious as he grows older. We see him first as a boy, banned from playing basketball because if his team loses, he cries, and floods “whole schools as once he’d done their pitch, the soil swollen, /poles sunk, it all turned to swamp for weeks,” though the refusal to let him play is itself just as likely to lead to inundation.

Basketball is the new religion here; the boys have meticulously constructed a basketball court from whatever materials they can find, and they emulate their American heroes in every way they possibly can, on and off the court. Basketball stands in for armed conflict: the boys’ leader, Bolu, trains them using a dog-eared copy of Sun Tzu’s The Art of War. It’s difficult to know whether he’s on the playing field or in the board room but it’s clear that Nigeria has been thoroughly colonised by American culture. Even so, the main threat to Demi still comes from the old world: having discovered that Demi is a natural basketball player, Bolu and his ilk have exploited the boy’s talents so thoroughly that he has depleted his father’s powers even further, and Zeus is now threatening his son. Modupe and her goddess-protector determine that the best thing would be to hide Demi in plain view by moving to the USA, where he can continue to play basketball without immediately attracting Zeus’s wrath.

Except that it was never going to be that easy. You may be wondering what happens to demigods in the modern era. You may even be surprised that there are demigods in the modern era, but gods, it would seem, have not changed that much. Apparently, they all play basketball, because where else can a demigod shine? Or they did, until their existence was accidentally revealed and an Agreement was signed. If this seems oddly reminiscent of the plot of the first Incredibles movie (2004), I’m sure that is no coincidence. Mortals can only handle so much superhumanity, it would seem.

So many gods, so many demigods, and perforce so many violated women. We may think that Demi’s story lies at the heart of The Half-God of Rainfall, but whereas he stands in the foreground, behind him stands Modupe—fearful, concerned, wondering how best to protect her child and herself. Without giving away the ending, it is worth noting that this novella’s dedication runs: ‘In solidarity with women who have spoken against or stood up to male abuses of power in all its forms.” Modupe is, then, the key to this element of the story, a woman whose “own mother […] screamed / when she foresaw the future looks of her daughter.” Modupe’s mother knew immediately what men would do to her daughter, “from the weak and pathetic overcome / by lust, to warlords who to crush rebellion / would attach the women to daunt their men and sons.” She takes steps to protect Modupe, committing her to the care of Osún the river goddess, and sacrificing herself in the process. Modupe was never an ordinary mortal but Osún’s “self” on earth, trained by the goddess to fight. Even this was not enough. Think of the other women who didn’t have that opportunity. And then think again about #metoo and the women who finally felt able to say “enough.”

This is a slim text but one that’s complex and withstands numerous rereadings. Read it once for Demi’s story, and the predicament of the mixed-race child who wants to belong but who doesn’t fit anywhere. Read it again for Modupe’s story, obscured at first by the posturing of the menfolk, but filled with righteous anger as she asserts her place in the world. Read it a third time to explore the intricate, subtle layers of Ellams’ storytelling—sly, allusive, and just a little tricksy, drawing on different traditions to make its universal point. And read it again to enjoy the playfulness of the language, as Ellams evokes water in its many forms, soothing and destructive, and the insistent thud of the basketball bouncing rhythmically on the court.