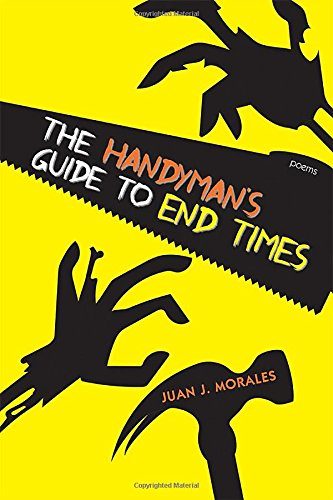 The Handyman’s Guide to End Times is a poetry collection that focuses on the interrelatedness of a multitude of personal, cultural, and environmental apocalypses—from the break-up of a relationship to the wild violence of zombies to the everyday chaos of home maintenance, repair, and renovation.

The book is divided into three sections: Demolition, Reanimation, and Inhabitation. The first section deals with breaking up, the second with recovery, and the third with new beginnings in a burned-out, post-apocalyptic landscape.

The speaker in many of these poems, as suggested by the title, is a handyman—someone who enjoys painting walls, renovating bathrooms, and fixing pipes. He’s also a practical survivalist, both when his relationship dissolves and when the zombies come knocking. Sometimes he’s successful, and sometimes he’s not. But always he approaches the chaos that is his life with an abiding sense of humor and resourcefulness.

The collection’s first poem, “The Long Engagement,” plays with the double meaning of “engagement”—as both an act of love and an act of war. Ultimately, this poem, like many others in the collection, looks for human connection in the midst of chaos:

Will you shoot bottles with me on weekends shortly after the first reports
of attacks? Will you grimace next to me when the television signals black out
from the dropped warheads glistening on metropolises? Do you promise
to huddle next to the radio with me until we lose all voices to static? (p. 3)

The speaker in this poem beseeches the person being addressed to connect with him, even in the middle of personal and societal breakdown. It’s an expression of love, even as the speaker knows the hoped-for connection is most likely not going to happen:

Promise, even if you don’t believe in God anymore,
we will finally have quality time together with our respirators
and we will dance into a life of running
hand in hand through the charred aftermath, counting
our bullets and our blessings, one by one. (p. 3)

The poem, like the collection as a whole, exaggerates the experience of breaking up, so that it becomes larger than a merely personal event and carries the weight of an entire society.

The second poem, “A Prayer for Safe Travels,” addresses a partner as she leaves to drive across a devastated landscape that reflects the wreck of her relationship with the narrator. The handyman expresses his remorse for whatever ultimate disconnection precipitated her leaving:

Her leaving sets in motion the book’s apocalypse, and everything starts to fall apart—houses, bodies, and the speaker’s life in general. Not long after, he has his first of several zombie dreams, described in a poem called “The Zombie Sisyphus Dream,” which embodies, in the form of a battle with a horrifying zombie from his unconscious mind, the injury he’s sustained from the breakup of his relationship:

Zombies in these poems are vividly brought to life with images like these, and the reader comes to understand that the undead are here not simply creatures of myth or Hollywood. Rather, they’re embodiments of emotion. The zombie apocalypse, in other words, is the handyman’s life.

The poem “My Eco-Crimes” captures this dual awareness of sorrow and guilt, starting with a litany of infractions, such as running the tap too long, murdering houseplants, and trapping mice. Still, though, the speaker wants to defend the small pleasures he had in the days and years leading up to the apocalypse:

But I’m not sorry
for the smokes I smashed out after a few drags
during the countdown toward a polluted future. (p. 7)

He’s at once sorrowful and compassionate for that earlier, less-aware self:

I will miss the days of excessive living
with soap or washers and dryers or
radios or wallets or gas stations
from the salad days when I thought
recycling was good enough. (p. 7)

This poem is interesting in the context of the broken relationship, because it’s about another—this time with the earth. And it’s about a person trying to come to terms with what led to that brokenness, and what role he played in the deterioration. It’s a sad and wistful poem that at the same time has Morales’s characteristic sense of humor and self-deprecation.

In the second section of the book, “Reanimation,” the poems speak of the process of healing, recovering, and coming back to life—though this return to life more often than not resembles a process of zombification. In the poems in this section we hear of a new house, complete with its own series of renovations, and the slow and uneven process of returning to the land of the living.

There are several poems in this section about dream-like zombie movies, which serve as a way for the speaker of the poems to make sense of and interpret his post-break up life and future. In “Breaking the Rules of the Zombie Flick, II,” for instance, we hear that

In this scene, you’re stumbling dead toward
two friends and pause
when one looks at you with pity eyes
and guns you down. (p. 41)

It is, we hear, “a head shot meant to help you out / of this z-world mess” (p. 41), which suggests that the speaker feels like a zombie in this world and just wants to be put out of his misery. In “Breaking the Rules of the Zombie Flick, III,” however, we get a little glimmer of hope, with the zombie speaker seeing a way out of an old train station and into someplace full of what might be hope and promise beyond:

You mumble forgiveness to everyone before
walking to the door
and exiting into the rest of the world. (p. 46)

At this point, the speaker seems to be ready to move forward into a future that, he hopes, is better than the place where he finds himself.

Finally, in the third section, “Inhabitation,” the poems begin to shift to a post-apocalyptic world. Maybe the zombies have won, and maybe it’s not quite the same world as it was before, but at least it’s relatively peaceful and hopeful. We hear, for instance, in “Like Teens,” of a new romantic interest, who has the speaker happy and excited:

We text with emoticons to make up
for days or hours
we wait between
the good-byes and everyone asking,
“Why are you smiling?” (p. 64)

The feelings of sadness and guilt recur elsewhere. The theme of environmental post-apocalypse is returned to, for example, in “Explaining Seafood to My Future Grandkids after the Extinction,” with the speaker explaining all the pleasures and delicacies of long-gone seafood:

I will describe, like a murder,
how we used to rip open
juicy bodies and clacking claws
of lobsters and crabs
to feast on warm meat inside.” (p. 70)

The reality of what’s happened to the oceans in this near-future, when the sea is “full of jellyfish and / swirling garbage” (p. 70), does not mean that the narrator has forgotten all the pleasures of eating seafood. This poem, like many others in the collection, is on a knife edge between pleasure and destruction, between life and death, and it keeps us there, straddling, not knowing which way we’re going to fall.

Likewise, the final poem in the collection, “Z Harmony,” is about a zombified world that, nonetheless, has its own peculiar pleasures. The poem opens with the sort of contradictory position that post-apocalyptic zombies might find themselves in:

When you’re undead, the compatibility parameters expand.
You’re caught in the rot of your own bag of skin
with one ravenous mouth and two hands
to claw down a kill. (p. 81)

In this world, the “new you” is a little like the old you, but decidedly different. And one’s newfound romantic partner is different, as well—not human, but not entirely unhuman, either:

You’ve adapted together
even if you cannot tell her how divine she looks tonight,
or how somehow, in her tattered, reanimated body, she glides. (p. 82)

It’s an unsettling end to an unsettling collection. A number of different apocalypses, by the end of the book, have come to pass, and yet the handyman and his lover aren’t entirely unhappy with their situation. They still have each other, and though that might not be enough to sustain them forever in a blighted, doomed world, it’s all they have.

Like Loading...
© Copyright 2019 By: Vivian Wagner
About Vivian Wagner
Vivian Wagner lives in New Concord, Ohio, where she’s an associate professor of English at Muskingum University. She’s written reviews for NewPages, Brevity, Pedestal Magazine, and The Georgia Review, and her work has appeared in The Atlantic, Narratively, Slice Magazine, and other publications. She’s the author of a memoir, Fiddle: One Woman, Four Strings, and 8,000 Miles of Music, and several poetry collections: The Village, Curiosities, and Raising.
No comments yet. Be the first!