Reviews
Size / / /
The Harbors of the Sun by Martha Wells
By: Na'amen Gobert Tilahun 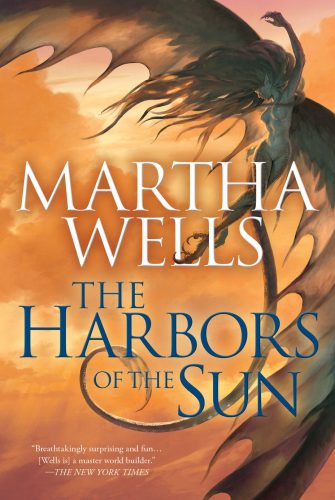 (In the interest of full disclosure I do share both a publisher and an editor with Martha Wells, though I do not know her personally.)

Reviewing The Harbors of the Sun is difficult because this book is not only the seventh work in the Books of the Raksura series but is also a direct sequel to 2016’s The Edge of Worlds. Harbors opens with the Raksura of Indigo Cloud scattered both by necessity and betrayal. Our main protagonist, Moon, is traveling with line-grandfather Stone, and tracking down the captured members of their court. Moon’s queen Jade and his birthqueen Malachite are following at a distance and gaining unlikely allies. Others left behind in the Reaches are readying themselves for a massive attack by The Fell, cannibalistic predators who are the Raksuras’ greatest enemy and who are also descended from the same ancestor species.

If you’ve read none of the series before now, I would guess that little of the above paragraph made sense to you. Even if I explained the basic terms above, much of the impact would be lost because of all the growth and character development woven throughout these books. This series creates an incredibly layered and intricate world with realistic characters. The Harbors of the Sun brings a number of lingering storylines ... not to an end, exactly but to a moment of closure. Some characters begin to let go of long held pain, important relationships are tested, and the Raksura find they may have to make previously unthinkable concessions to survive. These are all things that have been building in the background for all of the previous works in the series.

A quick and dirty description of the series as a whole that I’ve seen Wells herself use is “bisexual, polyamorous, matriarchal, shapeshifting flying lizard people.” This is absolutely correct. However it’s also more of the “who” than the “what” of the series. The what of the Raksura books is more complicated and subtle. If you had asked me what the series was about before reading The Edge of Worlds and The Harbors of the Sun, I would have answered that it was about a young man finding a home and his people after being on his own for too long. I would have said it was about rediscovering family and learning to trust again. Those answers are all still true, but now I realize that this series is also very much about a community constantly under attack, how they deal with trauma and continue fighting to survive and find a safe space.

Without giving away too much, Moon starts the series isolated and ignorant of his people because of an attack on his birthplace; and the results and reactions to this and other attacks that happen within the books affect every character deeply and in different ways. In between the exciting action scenes, characters are dealing with feelings of abandonment, PTSD, and the reverberations of sexual assault through whole families and communities. These heavy subjects are no less well depicted for the series’ being set in a secondary fantasy world. Wells handles them with subtlety and grace, so they slowly build almost within the background of the series, book by book. For example, there are a few characters in the series that are born as the result of sexual assault and while this is never ignored, it’s also not focused on too closely. However, in The Harbors of the Sun we, along with the characters, are forced to confront more directly what life would be like for those taken and forced to impregnate their captors and where they might find some consolation. (That sentence is a great call out to the book, so after you read it? Make sure to come back and marvel at my brilliance.) Wells never glosses over the pain and the after effects of terrible things; she treats these horrors with the respect they deserve unlike many other writers who linger over sexual assault and other violations to both eroticize the acts and use them to shock the reader.

Another great aspect of the series is the casual queerness of the characters. What I mean by a casual queerness is that the world itself is queer, so sexuality is a non-issue most of the time and since most of the characters are bisexual there is no single queer character for the whole of a complex identity to be pinned upon. As mentioned above, the Raksura are polyamorous, and though Moon’s main relationship is with the queen, Jade, he also has a strong and loving relationship with the male mentor-turned-warrior Chime. Chime is explicitly described as Moon’s favorite multiple times in the books. None of this is a main focus of the books but it is wonderful to see a world where queer sexuality is so accepted that it need not necessitate any conversation or explanation. Though it is thankfully becoming more common, it is still thrilling to see a world where queerness doesn’t exist as a way to isolate a character or to give them a tortured past. While many of Wells’s characters do have dark pasts, none of these are the result of their sexuality.

The series as a whole deserves all the accolades it has received and more, and The Harbors of the Sun acts as a lovely and fitting final book in the series. The adventure is thrilling and fast paced, moving you along at a steady pace that will make you rage at any real life interruptions. As always with Wells, the worldbuilding is top-notch and interesting, featuring unique species and fascinating flora and fauna that feel both fantastic and also oddly realistic. The interpersonal relationships between characters and the intrigue between both different species and political factions will keep you wondering until the very end. It’s always hard when a beloved series ends, but The Harbors of the Sun brings the Books of the Raksura to a satisfying end, one that leaves most characters in very different places emotionally than they were at their introduction. The world that Wells built still feels open and alive; so that this is more of a gentle tapering off than a firm end. Moon will certainly have many more adventures, even if we never get to see them.

Like Loading...
© Copyright 2017 By: Na'amen Gobert Tilahun
About Na'amen Gobert Tilahun
Na'amen Gobert Tilahun writes stuff that has appeared in io9.com, Queers Dig Time Lords, Stone Telling, Full of Crows, The Big Click, faggot dinosaur, Eleven Eleven, and more. He was named a Bay Area Writer to Watch/Read in 7x7 magazine, and his debut novel, The Root, was published in June 2016 and named an ALA Top Ten Rainbow List book for 2017. You can find him at https://www.facebook.com/NaamenGobertTilahun/ or @Naamenism on Twitter.
No comments yet. Be the first!