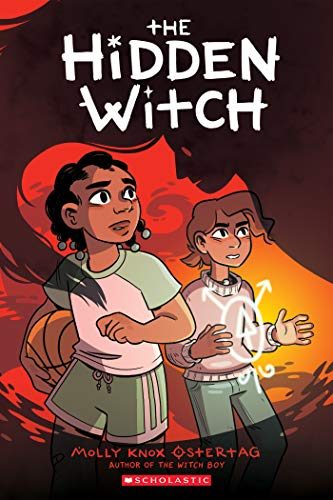 Molly Knox Ostertag’s follow-up to her graphic novel The Witch Boy is just as sweet, endearing, and topical as the first volume while expanding the world-building and the main character’s social circle.

I assumed at the start of the book that the title referred to main character Aster’s status—now grudgingly accepted as a witch by his own family but still hidden from the world at large—or perhaps to Aster’s great-uncle Mikasi, another male witch whose turn to evil was caused by his own family many years ago and who is now hidden away even from them, while attempts are made to separate the evil from the man. And while this is all true, the title also refers to a new character, Ariel. (This is not a spoiler, as the reader realizes what Ariel is within the first few pages of the book—even if the other characters don’t learn what she’s capable of until much later in the story.)

Bringing in a witch from outside the family allows the author to at least introduce the idea that Aster’s large family is not the only group capable of magic in this world. When Aster asks if his family should step in to find and help the mystery witch who is causing problems for Aster and his friends, Aster’s grandmother explains that magical families used to wage war with each other until a (presumably hard-fought) peace treaty was signed. “Now,” she explains, “we help each other when we can, and stay out of each other’s way when we can’t.” The implication here is that the treaty is fragile, and stepping in without knowing where things stand could possibly make things even worse.

But change is endemic in this world. The first book challenged rigidly-ingrained gender roles by having Aster unsuccessful (compared to his male cousins) and uninterested in shape-shifting, while being naturally adept in, and fascinated by, magic. The Hidden Witch continues to challenge long-held societal norms. In Aster’s family, it is unthinkable that someone would want to give up magic. It’s also unthinkable to the family that they might open up to anyone non-magical. Like the idea that only women can do magic and only men can shape-shift, both of these linchpins of the family’s survival are questioned by the kids at the center of the story. Aster’s fox-shifter cousin Sedge wants to give up shifting, and magic, completely—he wants to be what he feels he is inside rather than what he was born as. And, thanks to meeting Charlie in the first book, Aster has already started to push against the rules about mingling with, and trusting, non-magical folk.

In fact, Charlie continues to be the beacon of acceptance/harbinger of change/gateway to the mundane world. She is perhaps the least conflicted character in the series. Just as she quickly accepted Aster into her circle and accepted that magic is real, she accepts the new girl in school, Ariel, without qualification. This leads to the revelation of Ariel’s abilities, and rising complications stemming from Ariel’s trust issues, but throughout the book Charlie remains steadfast in wanting to be Ariel’s friend. Charlie also serves, inadvertently, as Sedge’s introduction to a world without magic and shapeshifting. So, yeah; Charlie’s Twitter bio would certainly be: Beacon. Harbinger. Gateway.

Everyone other than Charlie is trying to process trauma of some kind. Ariel has switched schools because of bullying; Sedge has PTSD from his mistreatment by Mikasi in the previous book; Aster is still fighting to be accepted as a witch by the older members of his family, as well as questions of whether, once allowed to pursue magic, he’ll turn out like his great-uncle. All of these character arcs come to a head in the second half of the book, although not all are resolved into a neat little bow. This is an ongoing series, after all.

Ostertag has populated her books with as diverse a cast as possible: Aster is mixed-race tan while his cousin Sedge is red-haired and pale-skinned; Charlie is African-American; Ariel is Latina; Charlie’s school is populated by every skin tone and body shape. It’s clear the author wants everyone who reads the book to see themselves represented and for her fictional world to accurately reflect our real world. This carries through from the individuals to the family unit representation. While Aster’s family seems to be composed completely of heterosexual couples, Charlie has two dads (and ohmygod are they so adorably in love with each other and proud of and doting on their daughter) and Ariel lives in a foster home situation.

The scenes between Aster and his grandmother, meanwhile, touch on respect for elders who have knowledge to pass on (a big issue in the LGBTQIA community right now, and other communities as well), recognizing that traditions are important but not infallible or irreplaceable—that change sometimes comes slowly, and that part of effecting change is taking responsibility for looking out for each other and helping others to heal. This is nicely juxtaposed with scenes of Aster and the aunt in charge of his magical education, which show that some people are resistant to change no matter how needed it may be—and no matter how that resistance hurts people they profess to love. Likewise, the sub-plot about Mikasi’s possible recuperation and redemption after the events of The Witch Boy is well-paced, and is interspersed with and interacts nicely with the main plot. These scenes with Mikasi add another layer to the inter-generational dynamics: not every trespass is easily forgiven, especially by those most traumatized, no matter how much the trespasser and those who love him may wish it.

Ostertag’s art for these books is all clean lines and open panels. Even the darkest night-time scenes have a natural lightness to them that allows the reader to take in all the details; there is no murkiness here (although there is plenty of darkness, especially in the scene’s with Ariel’s shadow-Fetch). Backgrounds are nicely detailed to set each scene, but then are often done away with in favor of solid color backing that draws the eye to the characters. Facial expressions and body language play a huge role in the storytelling, enhancing or revealing things dialogue alone wouldn’t: Charlie is constantly in movement and exuding positive energy in even the simplest stance or quietest moment; Sedge by comparison is almost always hunched in on himself, giving off a very nervous energy that Ostertag manages to carry through even to Sedge’s wolf form. Aster’s posture, meanwhile, alters depending on his mood or comfort level with a situation; Ariel’s remains insular and defensive (closed, but not hunched) with a glimmer of opening-up only in the final pages. I love how much attention Ostertag pays in these ways to visual characterization.

The Hidden Witch definitely does not exhibit any of the “sophomore slump” to which many second books in a series fall victim. This is a complete story in and of itself, but with clear narrative connections to the first book and to however many come after. The interpersonal dynamics, societal commentary, character depth, and magic all gathered here really do provide something for just about everyone who might pick the book up.