Reviews
Size / / /
The Land of Somewhere Safe by Hal Duncan
By: Mark Granger 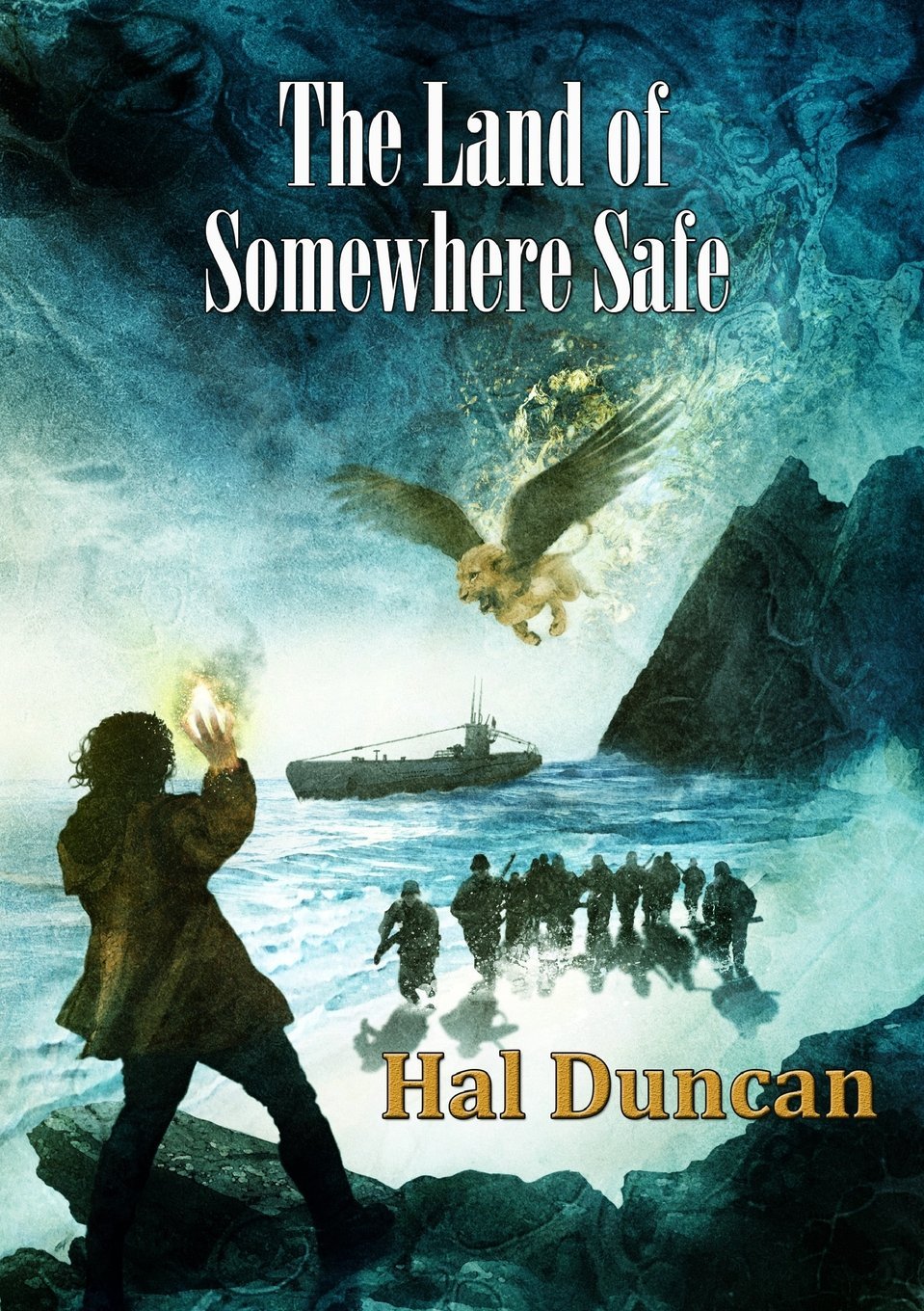 Hal Duncan does not mollycoddle you. That's the first thing I realised when I started reading The Land of Somewhere Safe. He writes with little regard for the reader, concentrating instead on what works best for his characters and his world. While admirable, this makes for a frustrating read. In fact, I took advantage of its novella length and read it twice, in the hope that I would become familiar enough with his prose and singular use of language, and I would concentrate solely on the story without having to chip my way through the dense stylistic choices.

I was not wholly successful.

The Land of Somewhere Safe is part of a series of tales from Duncan that involve the scruffians who, to quote the blurb on the back, are “irreverent foul-mouthed street urchins ... waifs who have been Fixed by the Stamp, frozen so that they are immortal.” This tale in particular is told, or “fabbled,” by one of the scruffians—Gobfabbler Haylard-Dunkling, Esquire—to a group of younger scruffians and, as a result, the narrative perspective becomes quite muddled. You not only have to be familiar with all the Scots-specific words, you also have to get your head around Duncan's own particular language he's created for the scruffians. And once you get familiar with all this you have to remember Gobfabbler will constantly interrupt the story, breaking off to directly address his audience i.e. the scruffians.

The story begins with two orphaned WWII evacuees, Peter and Lily, who board a train bound for Edinburgh. There they meet the Bastables.

... two boys and two girls covering yer full range of scamp, scrag, scallywag and scofflaw, all in greatcoats and scarfs, schoolcaps and tanktops for the boys, cardigans and berets for the girls, looking almost as unremarkable as Peter and Lily themselves, but managing to make that almost all that matters ... the impression they gives is ... well, definitely eccentric. (p. 12)

The train ends up going a lot further north than expected, eventually finding itself on the Isle of Skye. Once there the children are taken in, along with the Bastables, by Clan Chief Lady Fay MacGuffin of Dunstravaigin Castle.

It doesn't take long for Peter and Lily to realise all is not as it seems when they steal some magical snuff—named wishsnuff—and, with an “atchoo,” they're off. Magically flying across the hills east of Dunstravaigin wondering if Lady Fay's a witch, having snowball fights in the sky and listening in on Polish soldiers whispering about Nazi spies. Because yes, Nazi spies. But not only Nazi spies; Nazi spies who are into occultism. The Reverend Earnest Blackstone—or Herr Ernst von Schwarzenstein—is in Scotland to try to find the Stamp, the magical whatsit that makes those who use it immortal, and once he finds the scruffians he vows to take the Stamp for himself and for the Nazis.

Even though he is there under the pretence of being a Reverend, we are told from the off that he's a Nazi. I'm sure the reason for this is to establish the character as quickly as possible in the limited space, but it lacks the drama of the big reveal, which, granted, only happens a few pages later. It seems to me it would have made sense for Duncan to have had him visit the orphans and scruffians as Reverend Blackstone before revealing that—Oh, no!—he's a Nazi! It wouldn't have even been a big re-write. We could have been introduced to Herr Ernst von Schwarzenstein, Nazi Occultist Spy, in his lair, plotting to swipe the Stamp then, when the Reverend visits Dunstravaigin Castle to visit the evacuees, before revealing—Oh, no!—Blackstone and Von Schwarzenstein are one and the same. Not that it matters because as soon as Peter and Lily discover his true identity his Reverend disguise becomes irrelevant and he is portrayed as the occultist Nazi bastard that he is.

The story picks up as Peter and Lily head off, with the power of wishnuff on their side, to see what Blackstone is up to. They see him raise a lake monster, Addanc, so they decide to scram, but Lily gets captured while Peter scarpers.

From here the story doesn't hang around, whizzing off through an adventure that is barely contained in the book's ninety or so pages. This is also what I mean when I say Hal Duncan doesn't mollycoddle you. You have to be in from the start to keep up. Peter comes back to try to save Lily and gets roped into helping Blackstone, after the, in the words of Gobfabbler, “unctuous cuntfucker” uses Addanc to take control of Peter, in a scene that reminds me of the Doctor Who New Year special.

Then Peter feels the Addanc as skitterings along his sleeves and out the cuffs, as slithering down his legs, as snakelets round them. Feels it puppet his arms around Lily. He's sobbing, helpless, a dolly in its clutches.

From this moment on there is magic, there are dragons, there are unicorns, there is the titular Land of Somewhere Safe, and nods to existing stories—most notable Peter Pan—that the scruffians have supposedly been the basis of. But perhaps the story is a little too energetic. More than once I had to stop and re-read a paragraph or two as I felt I had missed something. How did that lad get on top of that dragon? How exactly did Blackstone come to be there? What the hell is going on? Duncan takes the idea of cutting all unnecessary words to an extreme to fit his sprawling story into much too small a space. He tries to conjure up images with a smattering of adjectives in an attempt to motor the story along, something which may be part of the Gobfabbler character's style but doesn't lend itself to a clear story.

For example, while the story is set in Scotland there isn't much need for description as Scottish landscapes are a well known setting in books and film, therefore broad strokes and mentions of sweeping hills are all that's needed. However, when the action moves to the dreamworld of The Land of Somewhere Safe, the story reads as if we are seeing things through a haze. Perhaps, however, this is a choice that tries to conjure up an unsubstantial quality similar to that of an actual dream, and if that is the case it achieves its goal, but for me it just gave no firm footing for the action. A lot of stuff happens in the last act of the story, whipping by like the overstuffed final third of a Marvel movie, but without a firm idea of where we are—so that the action seems just as ephemeral as the landscape.

Now, in my head, as hard as I try, I speak in a plain middle-England accent and I feel that is to the detriment of the story. It takes the power out of Duncan's words. To get me in the right headspace I visited Duncan's bandcamp page. There Duncan has audiobooks available of his scruffians series, all read by Duncan in his deep, expressive Glaswegian brogue, and I feel the best way to read The Land of Somewhere Safe is out loud in a Scottish accent, as that makes the story come alive. So, I did. Okay, the Scottish accent wasn't perfect but I do a better job than Mel Gibson ever managed.

Overall, The Land of Somewhere Safe frustrated me much like a book I reviewed last year—Origamy by Rachel Armstrong—and, much like that book, I feel that Duncan's novella could stand to be twice as long to give the story room to breathe. However, since reading Origamy I've read Stephen King's Bill Hodges trilogy, and as much as that seems irrelevant there was something in the second book, Finders Keepers, that really stuck with me. In it, one of the main characters takes a literature class and the teacher talks about the difference between something which may at first appear ridiculous or stupid and something you don't fully appreciate at first. To illustrate his point he uses the Wilfred Owen poem Dulce Et Decorum Est as an example.

"Time will pass! Tempus will fugit! Owen's poem may fall away from your mind, in which case your verdict of is-stupid will have turned out to be correct. For you, at least. But for some of you it will recur. And recur. And recur. Each time it does, the steady march of maturity will deepen its resonance. Each time that poem steals back into your mind, it will seem a little less stupid and a little more vital. A little more important. Until it shines, young ladies and gentleman. Until it shines."

And although I still think there are flaws in Origamy, Armstrong's words recur. And I still think there are also flaws in The Land of Somewhere Safe, Duncan's words, too, have already started to recur. These works are in my head, rattling around, reminding me of their existence, asking to be revisited. I have no doubt I will be investigating more of the Scruffians and Hal Duncan's work in general, but for now The Land of Somewhere Safe lives in a frustrated part of my head, refusing to be fully understood.

Like Loading...
© Copyright 2019 By: Mark Granger
About Mark Granger
Mark Granger is trying to be a writer. His work has been used on BBC Radio 4 Extra and his short stories have been shortlisted in several competitions. His work can be found at mark-granger.tumblr.com. Although he barely updates it nowadays. One day he’ll get a proper website and stop referring to himself in the third person.
No comments yet. Be the first!