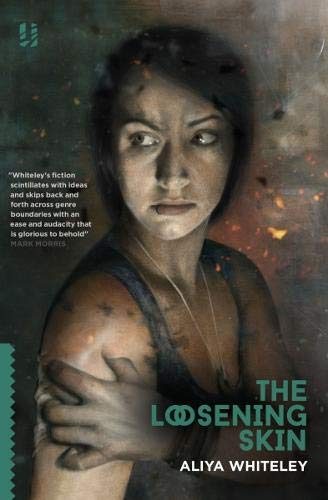 They say that, through incremental cellular replacement, we wear a new skin every seven years. In The Loosening Skin, life is much the same as it is in our familiar world, save that we shed our seven-year skins all at once, as if we were enormous snakes. And, when someone molts out of their old skin, they also shed any feelings of romantic love that they’ve accrued while in that skin. From this point of divergence, Aliya Whiteley’s seventh novel tackles the big stuff: love, identity, and the impermanence of both.

The novel primarily follows Rose Allington, a woman whose molts tend to come early and abruptly, and leave her with an overwhelming need to leave behind whatever she was doing with her life and start anew. An acquaintance suggests, and Rose later adopts, a diagnosis of Extreme Molt Syndrome. “We all know some people have a bad time with it, but doctors are saying if you have to dump it all every single time then maybe it’s a medical condition.” It seems that the majority of people take the molt entirely in stride, as an unavoidable but thankfully brief inconvenience. They molt, they take their old skin down to the local incinerator, they break up with a partner if they have one, and then they get on with their lives. It’s not totally unusual to feel the need to change more about your life just after a particular molt. It’s more strange, but not totally unheard of, to feel irresistibly compelled to cut and run from your life and social relationships immediately after every single molt, as Rose does.

It’s somewhere in this diagnosis that I found I didn’t totally trust the worldbuilding of The Loosening Skin. For my taste, Rose’s reactions to her molts aren’t different enough from the baseline that’s established around molting—or from just baseline human behavior—for me to understand their classification as disordered behavior. When Rose leaves her skins and jobs behind, she stays in the same country, she keeps in touch with her mother, and even the careers she moves through (military to personal security to private investigation) aren’t all that drastically different from each other. Yes, she changes jobs every few years, but, well, I’m thirty-three, I’m a millennial: so do I. And yes, she moves to a new town and doesn’t keep in touch with old friends, and again, here’s something I’ve certainly been guilty of more than once. I waited for the story to deliver on the promise of the back text: "[Rose’s] moults come quickly, changing everything about her life, who she is, who she loves." By the end of the book, I didn’t feel like any part of that description accurately reflected what I’d just read.

Rose recalls that her father walked out on his wife and children after his molt, but it seems he wasn’t considered strange for that action. And yet, Rose’s urge to shed her old life and profession after each molt is pathologized. If the point is meant to be that there are unfairly differing expectations of people’s post-molt behavior, and that these expectations are gendered, then this wasn’t articulated in a way that I could find in the text.

I don’t question the realism of Rose’s actions, or her father’s, or either’s desire to walk away—once, or over and over. But, because people in our non-molting world do get up and walk out of their lives regularly enough, I looked for something unique to the post-molt reaction; something to differentiate it from what I read as Rose’s very relatable anxiety, restlessness, and her need to have an exit strategy. Something that made the molt necessary to tell this particular story. So I turned then to the novel’s other central obsession: love.

The first two parts of the novel are narrated by Rose. Part three, which begins just a little over halfway through the book, is narrated by Mikhael Stuck. The switch to Mikhael’s narration took a little adjustment time for me as a reader, as a result of the late and surprising change. Mikhael is a character mentioned in passing by Rose as part of the “Stuck Six”—six people in a romantic relationship with each other, who as a unit gained celebrity. Mikhael’s section doesn’t give us much new plot information, but rather, shifts our focus thematically while expanding our view of the world of the novel. It’s frustrating at times to watch Mikhael search for and uncover things that we’ve already gone through with Rose.

It’s also frustrating to read about Mikhael’s relationships as if polyamory isn’t a real and somewhat common practice in our own world. There is no mention of any couple dynamic outside of heterosexual pairs, or the Six. Certainly, this particular relationship dynamic isn’t one you’re likely to run into at the local poly meetup, but I was left unsatisfied, wondering why the relationship would earn them public adoration rather than, if anything, scorn. The novel seemed to take for granted that a reader would accept that such a relationship would, in and of itself, garner nationwide, passionate, and largely positive media attention. It read to me as an assumption that wasn’t complicated by input from poly readers, and I regret the lack of exploration into how societal views of polyamory might be different in this world of the seven-year-molt. Relatedly, in such a world it seems odd that the institution of marriage is unchanged from marriage as we know it, that as far as we know the law doesn’t account for the changes a molt will bring to a relationship or a family.

I did love, however, Mikhael’s descriptions of love. Something that surrounded him, and that suffused their shared home, something that was given joyfully and generously. An abundance.

At the intersection of the molt and the issue of love is a new drug that promises to delay molting, letting people live out what we would call the natural lifespan of their relationships. The discovery of Suscutin should be an absolutely earthshaking change for this society. Yet, somehow, its introduction to the world falls flat for me, as a reader, because the scale of the stakes for this invention are never made clear.

The logistics of the skins, their black market value, the necessity of public incinerators, the everyday considerations (like taking time off work after a molt), and the fetishist possibilities (like stitching old skins into macabre lingerie); these were drawn with clarity, and some nuance. However, what I kept wanting from The Loosening Skin was a sure idea of how the inevitability of molting shifted human society and relationships askew from how we know them in our own world. What is present in this regard is mostly only there within the absences. Characters fall in and out of love with the cycle of their molts, but there isn’t discussion of falling out of love in between molts, by the familiar-to-us process of growing apart, or the possibility of falling back in love with someone after a molt. We’re told that research shows that in a normal molt, the only thing that a body loses with its old skin is “the form of sexually based attraction we call love”. Surely such a narrow definition of love must be hotly contested, if not by the researchers trying to define it, then by the public who do or don’t experience it. Unfortunately, if such a debate exists in this world, we aren’t made aware of it, and the definition of love as stated isn’t called into question.

The molt is a natural process, integrated into society. And yet, a large part of the Stuck Six’s fame is based on the tragic fragility of their love for each other. We’re not privy to why exactly the public finds them so enchanting. If the inevitability of the molt did produce a different public attitude towards polyamory in the novel’s world than largely exists in ours, then it’s left unsaid. Suscutin, when it becomes available, is near-universally used. The story seems to take for granted that people would immediately and enthusiastically embrace such a product, despite the fact that they all were born into and brought up in a world where, for all of history, “sexually-based attraction to one person” was shed every seven years.

I’ve been thinking about The Loosening Skin for weeks now. Whiteley’s characters are engaging and individual in exactly the way you want from a multi-narrator novel. The format of the text itself is fun to read, as well. Chapters are often dated, skipping back and forth through time now and again. Whenever a time skip occurs, the narration switches from first to third person, or from third to first. The story is much easier to understand than this explanation implies, though! The shifts are seamless, and we get a hint at the reasons for all the point of view switching straight from Rose near the end. In such an otherwise strong novel, my only wish is that I wasn’t left feeling I’d read a book that was nervous to commit fully to its own premise.

Like Loading...
© Copyright 2018 By: Nicasio Andres Reed
About Nicasio Andres Reed
Nicasio Andrés Reed is a Filipino-American writer and poet whose work has appeared in Queers Destroy Science Fiction, Strange Horizons, Shimmer, Liminality, Inkscrawl, and Beyond: The Queer Sci-Fi and Fantasy Comics Anthology. A member of the Queer Asian SF/F/H Illuminati, Nico currently resides in Madison, WI. Find him on Twitter @NicasioSilang.
No comments yet. Be the first!