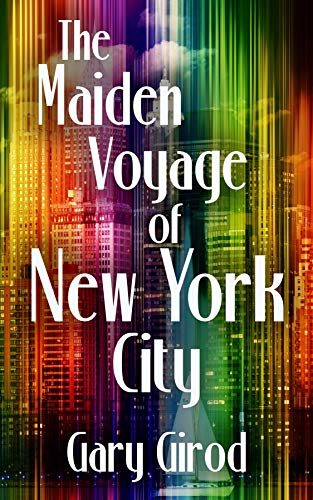 One of our worst environmental fears has come to pass. Coastal cities around the world have succumbed to rising sea levels. New York City is no longer a crowded metropolis. People have adapted and moved on, accepting their fate. Not so, however, engineer Marko Sverichek. He’s designed engines that have raised Manhattan back above the sea level, producing a Miracle. As “plastic bags, tin cans, and a thousand other knickknacks” float around the canals that separate the skyscrapers, an undefined technology restores the island back to its former glory.

Thus the prologue of Gary Girod’s novel defines the parameters of his future world. It is a world that is as recognisable as ours today, with a collection of characters who have personal problems and universal anxieties. In chapter one, a month after Manhattan’s Miracle, we meet a blogger or perhaps citizen journalist called Miles who is out to expose corruption and crime wherever he finds it. Next up we meet Alex, a cop, and his partner Cassidy. Chapter three introduces Lei Xu, an engineer who has invented something even more advanced than Marko’s machine. The plot is starting to develop. Lei has found a way to move New York’s skyscrapers independently of each other. We also learn about the value of money and the poverty gap. An hour’s scuba diving, for example, will set you back $180,000.

Beyond worldbuilding, Girod’s strength is his rounded characterisation. Alex, for example, could be dressed up as the hero of the piece. For sure, he’s the fairly typical rogue element who goes with his hunch and defies his boss. But he’s also unpleasant to his partner, Cassidy. He doesn’t trust her, perhaps rightly so. They are partners, yet he calls the shots as if he’s above her or better than she is. He treats her in a manner that could be described as abusive and misogynistic. Through Girod’s writing, we struggle to understand how Alex perceives women. He tends to see them as defined by their bodies as opposed to their behaviour or personalities. On the other hand, Girod describes Alex himself as having “sculpted biceps” and “thick legs.”

There is, though, an inescapable undercurrent of misogyny throughout this book. Miles and Alex have unpleasant relationships with, and thoughts about, women. Miles is too handsome to go undercover (in his own words) and women can’t resist him. As the mayor of the city and its main engineer are both women, it would suggest that Girod is making a comment about men in general as opposed to reflecting himself; but the bad taste remains.

There are other occasions, too, where Girod’s writing appears to highlight a lack of imagination. Why would someone order “the vegetarian salad”? Don’t salads have varieties in the future? Why does a character turning to crime dismiss his “black sweater and blue jeans” as too conspicuous, only to change into a “navy blue jacket and jeans”? While Girod’s characters are reasonably well rounded, they and especially his bit-part players have little agency or even identity. When we are told that one “picked a girl to dance with,” for example, there is no indication of whether or not this “girl” had a choice in the matter. Early on, meanwhile, Cassidy appears to be simply an exposition character. She shares an office with Alex but describes it to the reader as if she’s never noticed it before: “Your half of the wall looks like what you’d find in a serial killer’s lair.” In the future, New York cops still talk like they’re in a cheap movie.

Girod loves an adjective. Every piece of minutiae is described, be it an “expansive room,” an “extended closet” or an “aging woman with a teal and blue skirt with wrinkles around her eyes.” In a soup kitchen, there’s a “mousy girl with bright green eyes.” It’s all a bit much. Sometimes, even reading a paragraph can be draining. One short paragraph about a chase and fight contains the name Alex ten times.

By chapter 13, we are introduced to one of the novel’s most significant plot strands and themes. In the criminal underworld, Frederico and Ezreal operate as hoodlums with something of a moral stand. In fact, Ezreal is a socialist in America, a Robin Hood:

“The wealth should belong to us. To all of us, not just at this table, but everyone in this city.”

Ezreal believes the working classes built New York and therefore deserve to take back Manhattan. Although he still wants to be the one at the top of the tree, of course. Another of the novel’s characters, Rodney, is the true “have not” of the piece. He’s the working-class protagonist who just wants a decent job and to make his girl, Sam, happy. His friends, Grease and Antoni, are small-time crooks. He’s just about to lose his job. This is a crime novel set in a recognisable future about the wealth divide and the old maxim that power corrupts. Or does it?

New York’s mayor, Sophia Ramos, is being prevailed upon by Lei to back her big technological idea. Ramos is in charge of a city in debt and sees this as an opportunity to raise money:

There are slum skyscrapers in north Manhattan. Perhaps they could be sold off, raising revenue while removing the poor problem. And perhaps even the gangs, who are using Manhattan’s flooded subways to hide drugs and weapons, and kidnap billionaires? Initially, it seems Sophia is only interested in how others perceive her power.

Time moves oddly in The Maiden Voyage of New York City. Lei comes up with her concept of moving the skyscrapers early on in the novel; yet, not long after she sells the idea to Mayor Ramos, buildings have already been searched and cleared. Only a few weeks after Lei had her idea, buildings are sailing out into the ocean. Rabbles are roused and deals are done in no time at all. Meanwhile, the investigations from Alex and his relationship with Cassidy seem to run at a completely different speed. Just before the maiden voyage, the case has not been solved. Then it is. And then a week passes with nothing happening other than Cassidy trying to remain calm. Characters disappear altogether for whole tranches of narrative at a time.

It feels as if Girod grew into the writing process as the novel progressed. Despite all of the characters and the plot strands—from Rodney’s personal relationships to Lei’s struggle with the “monster” she’s created to the mayor’s plans to the cops versus the robbers—The Maiden Voyage of New York City takes more than half its length to actually feel interesting. Perhaps the messages within the story, and spending time with the characters, are what gets the reader through the book, rather than the plot itself. That message is a decent one: after the environmental disasters of rising sea levels, the rich took the opportunity to get richer and leave the poor poorer. If there were fewer characters and plot elements, this might be more gripping.

The elements that could be called science fictional, meanwhile, aren’t really. There is no explanation of how the novel’s central machines are possible. Passing mention of their power source (the ocean) has only vague credibility. The way that Lei describes her vision recalls the daily movements in the film Dark City (1998), while images of skyscrapers sailing away bring to mind the Terry Gilliam short film The Crimson Permanent Assurance (1983), in which an aging insurance building becomes a pirate ship (here, the first building to “set sail” is the Carlyle Building—in the novel one of the world’s first skyscrapers and built for an insurance company). In other words, even the themes of the novel feel borrowed—the haves taking more from the have nots.

Girod’s worldbuilding is fine, then, as long as you ignore the mechanics of his future. Workers chip barnacles from the newly raised buildings; Rodney still finds time to enjoy an ice cream; people are still emailing themselves files for safe keeping. Crime is both organised and petty, driven by the power hungry and the desperate alike. Lei comes across a body, and the novel suddenly becomes appropriately horrific to match the plight of the crime scene’s victim. These are striking images and meaningful moments. They stay with you.

Like Loading...
© Copyright 2020 By: Ian J. Simpson
About Ian J. Simpson
Ian J. Simpson is an academic library manager who has contributed science fiction and fantasy book and film reviews to, amongst others, The Third Alternative and Geek Syndicate. When not reading, he’s walking the greyhound, out with his camera, or in his allotment. Follow him on Twitter at @ianjsimpson.
No comments yet. Be the first!