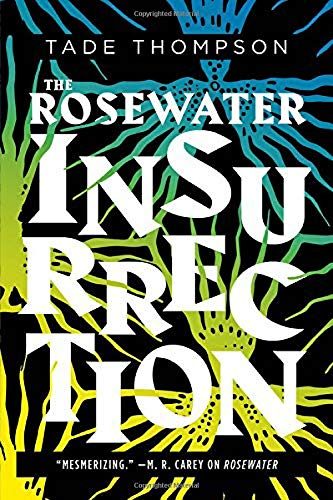 In Rosewater (2016), Tade Thompson initiated us into the world of Wormwood. Set in mid-twenty-first century Nigeria this, the first book of the Wormwood Trilogy, introduced the multiform alien Wormwood, with its magical healing and restorative powers, the dome within which it housed itself, and the city of Rosewater that sprung up around it. It also introduced onto the stage a memorable cast of characters—from government agents to “sensitives” who had special access to the alien-created xenosphere, allowing them telepathic abilities and a (limited) look into the future—as they all struggled to come to terms with the alien presence in their midst. The Rosewater Insurrection (2019) now takes forward the story.

The task of the second novel in a trilogy is an unenviable one. Located in a not-entirely-comfortable in-between place, it must hold many things in balance: being both sequel and prequel, building upon the themes of the first novel, creating the platform for the denouement in the third, fostering more intimacy between the reader and the characters without letting their extended presence pall, and of course, never letting the pace flag.

The Rosewater Insurrection pulls off that balancing act with aplomb. If Rosewater was effectively a story about First Contact—introducing us to the mechanics of the alien world of Wormwood, its engagement with its human neighbours (the freshly built town of Rosewater), and the two feeling each other out—then The Rosewater Insurrection is a story about conflict: the two worlds now begin to grate upon each other. The motive for Wormwood’s existence—as one of many “footholders” to prepare the way for a fuller takeover of Earth—is revealed at the beginning, but the story is anything but linear after that. Wormwood struggles with its own malevolent strains, which are more hostile to its human hosts. That internal conflict is mirrored by a fratricidal battle outside Wormwood, as Rosewater declares Independence from Nigeria, and a bloody war of secession begins. Jack Jacques, the mayor of Rosewater, turns to Wormwood to defend the fledgling city-state from the hostile Nigerian troops—only to find that, rotting away from the inside, the dome is unable to do anything of the sort. Upon the advice of the Nigerian Secret Service’s Femi Alaagomeji—whom he is holding prisoner—Jacques turns for help to Kaaro, the last (but one) surviving human being who can still communicate with the xenosphere. As federal troops battle Jacques’s mercenaries at the borders of—and within—Rosewater, Kaaro and Aminat prepare to try and save Wormwood, knowing all the while that their success might simply mean a hastening of the takeover of Earth.

Readers who enjoyed Rosewater will find much in The Rosewater Insurrection that is familiar. The second novel of the trilogy is, like the first, frenetically paced, involving swift transitions between narrative points of view, frequently violent, and centred around a set of hard-boiled, weather-beaten, and often cynical protagonists, all of which is held together by Thompson’s distinctive—and distinctively alluring—gravelly voice.  But while familiar characters from Rosewater—Femi, Kaaro, Aminat, Anthony, and others—reprise their roles, Thompson keeps things fresh by cleverly shifting the narrative centre-stage from Kaari (Rosewater’s primary protagonist) to Aminat. Charged with bringing Alyssa—the first human being detected to contain more than fifty percent xenoforms—to Jacques’s bunker, the events of The Rosewater Insurrection move and shape themselves around Aminat, who comes into her own in a deeper and richer way than was possible within her more constrained role in Rosewater. The introduction of Alyssa herself (by the end of the novel she has grown into her role as Wormwood’s external manifestation, the human “host” of the alien life-form known only as the “Homians”) is an important narrative shift in its own right. This is because it gives significant space upon the novel’s stage to the Homian world (its thoughts, its intelligence, and its motivations), almost on equal terms with the human.

Indeed, the character of Alyssa, and the multiple chapters written from her point of view, mark an important distinction between The Rosewater Insurrection and other SF novels (older as well as more contemporary) that explore the theme of human/alien contact. An obvious comparison, for example, is with Cixin Liu’s The Three-Body Problem: in both novels, we have a vastly superior alien intelligence that sees Earth as a fit space for colonization (the aliens in The Three-Body Problem tell human beings, “you’re bugs!”, while there is a point in The Rosewater Insurrection when Alyssa compares the relationship between the Homians and human beings to that between human beings and meat-animals), and which infiltrates initially through stealth, in order to pave the way for a full takeover. The difference, however, is that Thompson makes strong effort to resist the temptation of anthropomorphizing the terms of engagement. Of course, an alien intelligence is, by definition, alien, and so, even in this imaginary translation, the human medium cannot be entirely dispensed with. Thompson’s solution—to make the human body exist in symbiosis with the alien intelligence—is, of course, familiar to SF. The difference, as I mentioned above, is that it comes closest to imagining the relationship in equal (or nearly equal) terms.

If Rosewater was about worldbuilding, then The Rosewater Insurrection is about the tremendous narrative possibilities that exist within a world that has been painstakingly built up over the course of a preceding novel. Like the best SF, The Rosewater Insurrection sets up genuine and deep ethical and moral conflicts, and refuses us the easy luxury of straightforward resolution. At the heart of it is the choice facing the humans as Wormwood turns in on itself: to let it die, or to save it, and potentially pave the way for Earth’s own colonization. For Femi, the choice is starkly clear. For Kaaro and Aminat, who watch the federal troops visit merciless cruelties upon people during the course of the war, not so much. The solution, when it comes, is an elegant one, that forestalls the dilemma (something that seems to be recognised only by Hannah, Jacques’s wife), without resolving it.

Furthermore, the conflicts in The Rosewater Insurrection are situated and contextual. Although there are no direct references, Rosewater’s declaration of independence—and the ensuing war—does seem like a riff on the doomed Biafran bid for independence from Nigeria in the 1960s. As an aside, it’s worth thinking about how the shift in gravity in modern SF from the United States and the UK must eventually entail a shift in dominant historical markers as well. Isaac Asimov’s Foundation series was famously modeled on the fall of the Roman Empire—and you could not have a more apt characterization of the Eurocentric character of most modern English-language SF. Perhaps, however, The Rosewater Insurrection is a harbinger of a more decentralized set of reference points—or at least, one would hope so!

Apart from the possibility of straightforward historical analogy, however, The Rosewater Insurrection (like Rosewater before it) offers us an SF that is sensitive to the structural and institutional roots of many of the problems that the world faces today. While never making too fine a point of it, the novel is unmistakably situated within the context of the twenty-first century scramble for Africa (with China and Russia being the primary actors), issues of international (and inter-generational) debt, and—inevitably—climate change. It is this, in fact, that brings me to my only (and minor) quibble with the novel: for a series—and a writer—so attuned to structure and context, it felt like an ever-so-slight letdown to read a cliffhanger-style ending where the fate of the world turned upon the actions of a few individuals. The ending is, of course, thrillingly paced and a delight to read in its own right, but one did get the feeling of having been here before with mainstream SF, too many times. Perhaps that will be remedied in the concluding volume.

That is (as I said) a minor quibble, at best. The Rosewater series—and Thompson’s writing—has been fulsomely praised by reviewers, and justly so. The Rosewater Insurrection takes up right where Rosewater left off, and does a brilliant job of deepening and enriching the story, adding layers of complexity to both the characters and the events, and providing us with one of the more sensitive, nuanced, and moving accounts of a human/alien relationship. It will be fascinating to see how Thompson concludes this memorable series.