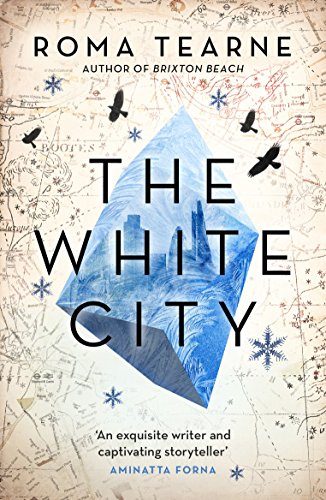 Roma Tearne's fifth novel is blurbed as taking place in a “dystopian near-future.” Most of it is told in flashback, as London thaws after a quarter-century of ice-bound winter. The narrator, Hera, opens her story on the fateful day twenty-seven years previously when the first snow fell and a police anti-terror squad raided her family home to drag away her brother.

Hera's parents immigrated to England from the Middle East, and the first half of this short book details their attempts to find out what happened to their son in the face of public prejudice, institutional obfuscation, and the encroaching cold. Hera was an art student, and in the chaos took refuge in an awkward relationship with Raphael. He was her muse, a much older man, and, as we find out in the book's second section, a survivor of a brutally repressive military regime in an unnamed desert country. The final section of the book slingshots us forward again to the thaw, as Hera comes to terms with all that has been lost, forgotten, and disappeared.

That's a bare-bones plot summary, which I hope you'll forgive me for starting with, as the truth is that I struggled with this novel. On the basis of the blurb, I was expecting some kind of hardish cli-fi, and this is not that. In fact, in terms of genre it's not entirely clear what this novel is, even within itself, until very late in the day. I've no wish to dive too deeply into the Speculative vs Literary Fiction brouhaha, perhaps most (in)famously exemplified by Ursula Le Guin's and Kazuo Ishiguro's back and forth regarding The Buried Giant (2015). But for our purposes, while I certainly wouldn't accuse Tearne of “despising” SF, I will note that the deployment of tropes within The White City positions it firmly towards the literary end of the spectrum, and not always in ways which I appreciated or understood.

Let's start with some more general considerations, however. The opening and closing sections of the book are effectively epistolary, with Hera addressing the “you” of Raphael. He was an astronomer, and there are some wonderful lines about the stars, as well as lovingly weary comments about his cat that'll ring true for anyone who's ever cohabited with one of the animals. There's a self-certain naivety, a kind of assured vulnerability about Hera that works for a young woman addressing her more world-weary lover, but her voice frequently strays into obvious ventriloquism: she's given to “crying out” lengthy, multi-clause sentences bemoaning the state of the world and her existence within it, and offering bald platitudes such as, “Prayer and anger are a bad mix.”

The second section is very different, and easily the best part of the book. It's written from a much less affected third-person perspective and describes Raphael's past life during the “Reign of Terror” in his home country. In the afterword, Tearne thanks the Chilean survivors of Pinochet's regime she interviewed, and there's an authenticity here which translates to the page with chilling effectiveness; these are ten short, tightly powerful chapters that elevate the entire book. Aside from a few lines about a mystical eagle (birds are a key motif throughout), the entire section is squarely mimetic, amplifying Raphael's fear and guilt as he evades horrors which are only too real and human. The final part returns to Hera as the thaw begins, and she attempts to reconcile herself with her knowledge of Raphael's past, her family’s dissolution, and … melting ice, I guess.

A couple of comparisons might help illuminate my ambivalence. I recently finished N. K. Jemisin's rightly acclaimed Broken Earth trilogy—another tale written largely in the second person that concerns itself with prejudice, discrimination, and crimes against humanity. Even accounting for the difference in length between the two works, there's a huge disparity in the metaphorical richness: Jemisin’s Stillness is a coherent, multilayered world in which the speculative elements reflect and magnify the central thematic concerns, whereas the White City is a city that's white. Tearne's book is in thrall to its metaphors, but not, unfortunately, sufficiently curious to develop them to any satisfying depth. Occasional nods to more recognizably SFnal tropes (the discovery of a new galaxy, the almost comically clichéd description of the technoprison to which Hera's brother is dispatched) seem to exist only to remind the reader that the book is set in the not-so-distant future, while the ice over London is exactly as hostile to Hera and her family as the city’s residents are. Its freeze and thaw meticulously represent her emotion and recollection, but make no sense in terms of actual climate.

I felt a similar frustration with Emmi Itäranta's Memory of Water (2012), also set in a superficially realised post-climate-change dystopia—and a book that, for all its various merits, drove me up the wall. Itäranta posits a global climate that's somehow both hotter and dryer than at present (the world actually gets wetter as it warms, as all the melted ice reenters circulation), yet still imagines a whole host of technologies that need massive amounts of water to operate. Likewise, Tearne's mini ice age contains so many implausibilities that I stopped keeping track, but just to get a couple off my chest: the ice covering London is deep enough to bury entire cars, so meters thick, but Hera is able to remain in her family home, with its smashed ground-floor windows, for decades; when the ice melts, she catches a self-driving train to the seaside—that this train is still running on schedule after being frozen solid for quarter of a century is incongruous enough for it to be cursorily lampshaded, but the coastline still being the same passes without comment. (Those of you who wish to know more could google “Doggerland,” which is surprisingly SFW.)

It eventually becomes apparent that, as with Memory of Water, scientific plausibility is not really the point; but I'm a physical geographer by training so I'm afraid you'll have to allow me a little nitpicking. More significantly, at a conceptual level there's a lack of coherence to these metaphors that causes them to distract more often than they illuminate. Towards the end of the book Hera visits “a place as sad as a piece of sad music,” a simile so circular it's almost zen, and a telling example of the book's wider issue. Metaphors work by comparing thing A (the tenor) to thing B (the vehicle) so that certain qualities of thing B are transferred to thing A. The vehicles of the metaphors in The White City are often realized so shallowly that there's little new information to transfer, little to add to our understanding—we're only one step away from, “It was a thing as sad as a sad thing.” If the comparison is so directly one-to-one, it does leave you questioning the need to make it in the first place.

The final section offers an answer of a sort. It was only in these last dozen chapters that I grasped that the book wants to be (and, in fairness and hindsight, is) a ghost story. Had I read it as such from the beginning I think I would have got along with it much better, or at least have been primed to be less literally minded about the worldbuilding, less ready to start kicking stuff down with the clomping foot of nerdism. But that I was is not entirely down to my own personal foibles.

In terms of character, younger Hera is a little too affected to act as an emotional proxy for the reader, which lessens the effectiveness of her older self's role as an avatar of wider humanity, whose phantoms are our phantoms. In terms of genre, at heart ghost stories are about the decisions of the past; setting one in the future requires a little more work to manage audience expectations regarding that shift in tense. The White City doesn't commit to its position until it's almost over, a belated reframing that helps the reader interpret things that were previously frustrating, but can't retroactively negate that frustration, and comes a little too close to painting it all as a dream. If you're primed for a story about what could be, you'll need a bit of help to see it as about what could have been, about what isn't and what was.

This book is at its best when it hews most closely to mimesis, when it's a book about what is. The more realist passages—notably Raphael's past, the depictions of British officialdom's brutality in the name of “security,” Hera's familial dysfunction, and her clear-eyed considerations of assimilation and rejection—contain writing of real eloquence, insight, and impact; but the only substantive difference from the present day is the snow. The metaphors and SFnal elements in The White City rarely enhance its strengths; they're often too thinly realized to hold their own weight and were, to this reader at least, actively distracting. It has important things to say about where we are and how we got here, but, ultimately, just didn't need to be speculative fiction: why look to the “near-future” when the dystopia is so clearly of the here and now?

Like Loading...
© Copyright 2018 By: K. Kamo
About K. Kamo
K. Kamo has master's degrees in globalization and applied linguistics and teaches in Japan, facts that are more related in theory than in practice. He blogs at this is how she fight start and occasionally tweets. He also regrets not choosing a less abstruse pseudonym.
No comments yet. Be the first!