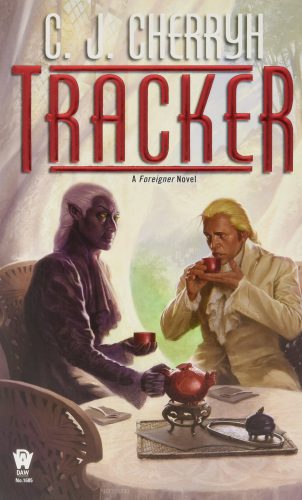 Picking up a long-running saga comprised of related stories is often a daunting prospect: where to begin? Does one need, for example, to start with book one of Pratchett’s Discworld? This can put many readers off even picking up a book, no matter how acclaimed. If, like me, you have been putting off C. J. Cherryh's multiple Hugo award-winning Foreigner series, the author provides an accessible entry with her sixteenth volume, Tracker (2015), and its companion novel, Visitor (2016).

There is a risk in helping readers get up to speed in the way Cherryh does in these two novels. When Guy Gavriel Kay begins books two and three of the Fionavar Tapestry with recaps, for example, I find myself impatiently scanning the text. And to some extent Tracker suffers a similar fate: the first seventy-five pages or so are essentially our entry into the world and its characters. But the benefit of drawing out the recap, and delivering it in small doses over so many pages, is that it feels less like a recap. Not much happens, but we do enjoy time and space to get to know our principle characters and gain some insight into the extensive backstory we’ve missed.

These are quiet, thoughtful books with intricate but measured pacing. If you're looking for science fiction that has suicide missions and narrow escapes and wacky alien cultures that promise sex and violence, these aren't your books—all of these elements are part of the novels, but they don’t drive the plot. Think instead of courtly intrigue, where every word and gesture and action carries infinite nuance, and a single misstep could lead to destruction—for yourself, for your people, for your entire world. Still waters run deep, as the saying goes, and while these books appear very still on the surface, Cherryh's writing is deeper than many of her contemporaries. These are books that don't keep you up at night turning pages; instead, they keep you occupied for weeks contemplating her imaginative worlds: easy to put down and get out of your hands, very hard to get out of your head.

The basic premise is familiar enough—an outsider among his own kind has found a place with a new people, a new culture, and works as intermediary between the two. Think Dances with Wolves or The Last Samurai, with a great deal less white savior complex. Bren Cameron is that intermediary, and while most of the iceberg of how he arrived at his position and his relationships with his atevi associates is hidden beneath the surface of previous volumes, the first quarter of Tracker drops enough in reference, allusion, innuendo, and exposition that reading previous books would be a welcome but unnecessary exercise if your primary goal is simply to enjoy these two books.

Here are the broad sweeps: long ago humans came to the atevi home world and built a station around it; they landed, had conflict with the indigenous species, were sequestered to an island nation (Mospheira) off a large continent (think Sri Lanka or Madagascar), and it took two centuries for the two parties to iron out their differences. Then more humans appear, people left behind for centuries at a remote space outpost, and who require assistance after an attack on the station. They're rescued, but are as unlike the humans of Mospheira as the Mospheirans are to the atevi, and they threaten the very delicate peace that has only recently been achieved. Meanwhile, a fourth people, the kyo, responsible for the attack on the station, are in a fight to the death with a mysterious fifth culture somewhere on the other side of their territory. The kyo are understandably interested in whether these new peoples of the atevi homeworld are friend or foe. They’re also vastly superior in technology and weaponry, so their interest poses an existential threat to humans and atevi alike. Bren Cameron, official mediator between humans and atevi, is the obvious choice to mediate between kyo, humans, and atevi—but is he up to the task?

The angst of this question is what drives the latter third of Tracker and the entirety of Visitor (it isn’t until halfway through Visitor that the kyo finally arrive). Meanwhile there are station politics to work through as both groups of humans harbor deep-seeded prejudices and conflicting desires, and their conflict puts them at odds with the atevi. The temptation to overexplain Cherryh’s very intricate tangles is hard to resist—for reviewers, for readers, and for the writer herself. If there is a fault to be had in Visitor, it is that the author has written herself into a very challenging plot hole; if we were to adopt the hoary metaphor for the straitjacket, this one would be a heavily wrinkled garment which Cherryh very patiently and slowly irons out one square inch at a time.

Things begin to pick up once the kyo arrive. Tracker has station intrigue that Bren must sort out, a problem between humans that borders on the verge of catastrophe, and the book is effective in revealing character and culture; but it isn't until halfway through Visitor that I began feeling anything more than admiration for the writing and curiosity about what was about to happen—or that I finally felt emotionally invested in character and situation. The kyo are infinitely interesting: a vastly superior power, much more alien to all parties than the atevi ever were. If the atevi are an intriguing and original riff on shogunate Japan, the mind searches for a kyo analog and arrives at only fragments: Mongolian horse riders under the khans, first contact Amazonian tribes, the mysterious forebears of the Hungarian language. None quite fit the mark. The kyo are a truly new people. But how do you encourage dialogue between people with absolutely nothing in common?

Bren frets over the nearly impossible task of communicating at all, much less facilitating a positive dialogue that might negotiate peace between multiple parties:

Verbs combined, and seemed hell to figure, in forms and nuance. They were dicey things, like nouns or states of being embedding outcomes, and a few infixes giving clues to desirable and undesirable values. If they were even verbs. Or if that ancient concept was not misleading him. Could one negotiate a treaty with only nouns? Easier said than done. Did the kyo even have a concept like treaty? (Tracker, pp. 210-211)

Some 300-odd pages later, in Visitor, as Bren creates what he hopes will be a Rosetta Stone-like dictionary, one based around images rather than letters, he continues in similar fashion:

He hoped to find similar core sounds within the kyo language. It was possible that could give him at least some keys to the way the kyo organized the universe. It was a dictionary of images designed to elicit critical words and organize them around concepts and relationships, organized with the intent to approach abstracts…. He sorted, categorized, linked, and cross-linked. Action. Substance. Quality. He began to recall details of their meetings two years ago, questions he had retained that were still questions, nuances of sound. Body language. Questions and more questions.” (p. 191) 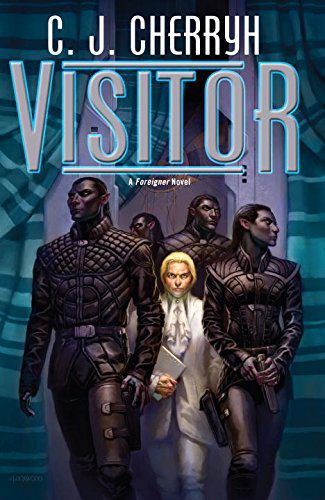 That final line, "questions and more questions," applies just as well to the reader's experience. Not that Cherryh doesn't work to explain what needs explaining and resolve conflict in meaningful ways—but there's so much hidden below, so much verisimilitude to these entirely fictitious peoples, that it beggars belief that they are fictitious at all. They feel so very real.

Were this the extent of the narrative, these novels would be a satisfying, almost ethnographical account of first contact. But there's that mysterious fifth civilisation, the one with whom the kyo are in a war of attrition, a Carthage/Rome struggle to the death that spans solar systems. Bren is taken to the kyo ship to meet the single surviving prisoner of these people—and the captive is human. The stakes instantly go through the roof. No wonder, then, the kyo's attack on the space station, and their intense interest in finding where these humans live, how they traveled all the way across kyo territory undetected. The kyo face their own dilemma, and the easiest solution would be to destroy the atevi homeworld and forestall any future threat from the rear. High stakes indeed.

Bren's meeting with the captive, Cullen, presents the novels’ most challenging ethical conflict: Leave him to the mercies of the kyo? Try to mount a rescue? Kill him?

He had never, never in his life, thought the terrible thought he had now—that if this one voice were silenced—if he had to make the Guild’s kind of choices, not for evil, not for ambition—he could let generations of ordinary shopkeepers and craftsmen go on about their lives, have their children, grow up and grow old in peace. He could do it. He would do it. He could not let some stubborn human notion of returning to a home they didn’t remotely understand plunge them all into war.(Visitor, p. 317)

For me, it is the pathos of this decision in the latter tenth of this novel that truly elevates the book above good writing and a very careful attention to detail. Here lies the intersection of philosophy, ethics, and metaphysics. Cool, flashy movies that pack seats tend to be what laypeople think of as science fiction; they also tend to be short on intense exploration of the human condition. But it is in novels like Visitor that science fiction stakes its claim on importance and relevance in literature and in our cultural imagination; it is here where C. J. Cherryh resides among the best in her profession.

How Bren resolves this conflict, with the help of his kyo counterpart, I won't spoil here, but it is a compromise in that most political of senses—people come to the table with what they want, and while nobody leaves happy with what they get, they all accept that nobody else came out better. It's a realistic assessment of how we mediate conflict in a multicultural, multi-tradition state, country, or world. Cherryh has the eye of an anthropologist; were she writing nonfiction about extant human cultures, her writings would be primers for international affairs and conflict resolution. As science fiction, these two books may not be very exciting, and not much happens in a large span of pages, but they nevertheless provide an impressive insight into the conflict that lies at the heart of the human condition: how do we juggle the competing expectations, desires, and needs of so many very different peoples living in an increasingly connected, compact world?

I'm not convinced Tracker and Visitor are books that every science fiction fan will want to read. They won’t appeal to many tastes. But for readers with even a passing interest in political intrigue, for writers who want to see how to write interestingly and compassionately about the other, for people looking at careers in foreign service or cultural anthropology—for readers who fall outside those categories, who are willing to step outside their usual reading habits to pick up something different and challenging and meaningful—these novels are intricately wrought guidebooks toward understanding, respect, mediation, and healing. Couldn’t we all use a little more of each?

Like Loading...
© Copyright 2018 By: A. S. Moser
About A. S. Moser
A. S. Moser is a writer and teacher. His current project is a near-future novel about rising seas, the collapse of currency, and smuggling. For more, follow him on Twitter.
2 comments on “Tracker and Visitor by C. J. Cherryh”

This is one of the best reviews I have read - or any book.

Excellent review. No one who is a fan of C. J. Cherryh's books would miss ANY of her books!