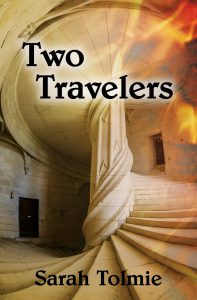 With Two Travelers, Tolmie once again offers crisp prose that makes all the rest possible. Her sharp, clear voice keeps these conceptually fascinating stories vivid and grounded, allows her to offer up her signature striking, emotionally resonant images, and makes me believe in the unusual yet potent connections that form between her characters (all of whom I find I like very much). The two stories contained in this volume, “The Dancer on the Stairs” and “The Burning Furrow,” focus, as the title of the volume would suggest, on travelers. They do not, however, have much to say about the vagabond life. They are not picaresque tales. They are about putting down roots, about what makes a traveler feel settled at last.

Those wishing to read just one story or the other could certainly do so, but the two make a good pair. For instance, our first narrator explains that as she has become fluent in the language of protocol dance, she has begun to feel that names are worth very little, since one cannot dance a name, and since names are not unique. Once she almost forgot her name. On the other hand, in the second story, one people’s names are all words that are part of one long, unchanging poem. Each year, the people put the dust of their name tokens in the earth, and by magic the tokens reform with new names, changed to still render the poem despite smaller or larger families. They view ordinary names, names that do not come out of the earth via magic, that do not contain the poem of the people, to be worth very little.

The really nasty part of the evening is over. That’s the bit when we first arrive and have to take off our hstitin and hand them over to the elders. That’s usually around dusk. It’s totally hateful. I hate other people seeing mine. Or touching it. It’s revolting. This year Una cried and screamed and fussed for an hour after hers was taken; that’s why she was so exhausted. (p. 50)

We later see the quiet eroticism that can inhere in ritual, however:

She comes toward him, holding out her hands. Instinctively he extends his own, palms together, as he always saw people do in court. She places hers upon them, interlaced, and performs a deep curtsey in front of him. For a brief moment he is bearing a surprising amount of her weight on his hands. This is the formal salutation of a lady to a lord. (p. 82)

This style of bowing is a remarkable invention by Tolmie. The number of brilliantly drawn rituals in these two stories together is truly astounding, alone enough to make these stories worth reading, but far from the only reason to do so.

In “The Dancer on the Stairs,” a woman wakes up on a staircase in another world. For a long time, she is trapped there. The staircase is a lawless place. Social debts, ties, and obligations mean everything in that world, but on the staircase they are null and void. This space where ties and bonds and obligations do not exist enables the extreme order of the rest of the world. From the perspective of our narrator—and we are given no glimpse beyond her perspective—the system works beautifully. It is a world not of stasis, but of balance. Even breaks in the usual way of things work towards order, towards the preservation of the system. Beyond the staircase, people associate only with people born in compatible seasons of the year. Most people in this world can sense this compatibility palpably—only a few, including her, cannot. As a result, she habitually violates one of the most profound and visceral laws of the land. She has a role to play, however, which actually depends on her inability to sense these compatibilities, and is able to find a place in this strange world. She has become part of her new world and it has become part of her; she has absorbed its way of life into her language and thought. Yet she still disturbs those around her. She belongs, while still reminding the culture frequently of its greatest taboos. Tolmie excels in rendering this position, and in exploring the ways in which custom and violations of that custom exist together in balance in this world. The precision of her writing allows her to offer up this complex situation with an exceedingly light touch. The tensions I am describing do not feel like tensions, because the clear, well judged language offers them up simply as the narrator’s truth. Though the contentment of the narrator of the story bleeds off the page, the story is still suspenseful. The story culminates with a ritual dance; Tolmie manages to make this climax feel momentous and piercingly important, despite the fact that it is a dance, not a battle, and despite the fact that the narrator is so happy in her new life.

The second story in the volume is a more ambivalent, thorny tale. Where the first had just one narrator, writing in a spirit of quiet contentment, "The Burning Furrow" follows multiple point of view characters who experience far greater levels of internal conflict and strife. The characters pass back and forth between two worlds and feel caught between both. Neither is a world of balance like our first narrator’s. A family lives quietly, running a restaurant. At the start of the story, their teenage daughter has just gotten pregnant by her high school boyfriend. His father, Mike Donnelly, has come to meet the parents. Mike, like most people, thinks the family he’s now involved with are Roma, from Bulgaria. In reality, the family’s father, Eyo’t, has a gift for traveling between his native Dinesen, an oppressive non-industrial world where his people are a minority, and a world that may be our own. Eyo’t is a hero among his people (they call themselves “the people”), helping them with medicine and money and information he gains via his traveling.

Tolmie refuses to fetishize Eyo't’s world and in so doing shows the extent to which fantasy realms with lords and ladies and politics generally are fetishized, even in a “realistic” series like George R. R. Martin's A Song of Ice and Fire. Unlike in Martin’s world, the politics of Dinesen seem like a series of dull, yet still cruel and violent, squabbles. The complicated lineages seem empty and absurd—we hear about them mostly through “the people” who have other systems of knowledge and pity the Dinesens for their petty heraldry. The burning furrow (which gives the story its title) is rich with magic and atmosphere, but the rest of the land has little to offer. One of the major questions of this story is which world the characters will choose as their home. It’s hard to see much draw in Dinesen itself. It seems that what ties her travelers to their homes seems to be who is there and who isn’t, who they are and can be in those lands, their sense of security, of responsibility, of belonging. The magical place of the burning seems entirely distinct from the rest of Dinesen, almost a third, separate world.

Tolmie makes it clear that Dinesen is not just uncharming. It is oppressive. Rituals serve as climaxes for both of the stories in this volume. When these rituals take place, the world seems to collapse, to transform, to shake, to burn, but the key systems and orders of the worlds she writes are not upended. The rituals aren’t about that in the slightest, despite feeling transformative. In the first story, revolution or reform do not seem to be called for. In the second, they do, but the call goes unanswered. This means that Eyo’t’s story is one of working against oppression without working towards revolution or reform. One of the central plot points involves Eyo’t intercepting news of a law passed to deprive Eyo’t’s people of any inns they might own. Due to Eyo’t’s work, innkeepers who would have lost everything are able to arrange clever deals with their neighbors to preserve their wealth. Again and again, characters in the story question whether Eyo’t’s information-gathering mission is worth the risk. In part, the fact that the work and its gains are so small—almost shabby—tell us that he is doing this for other reasons (love for a woman is involved), and that is clearly deliberate on Tolmie’s part. I do find myself wondering, though, what it means for this story to leave the unjust status quo so entirely intact.

N. K. Jemisin notes in a recent interview: “The status quo is harmful, the status quo is significantly racist and sexist and a whole bunch of other things that I think need to change. With epic fantasy there is a tendency for it to be quintessentially conservative, in that its job is to restore what is perceived to be out of whack.” Tolmie certainly does not make the conservative choice of giving her characters the job of restoring what is out of whack, but neither does she tell stories about making a serious challenge to these worlds’ orders. I find myself brought up short by this, but I believe both stories to be even more worth reading as a result of raising questions about a story’s responsibility to give its reader a revolution. Both are challenging to me conceptually, yet a simple pleasure to read: tense, erotic, surprising, and lovely. Highly recommended.

Like Loading...
© Copyright 2016 By: Molly Katz
About Molly Katz
Molly Katz has recently completed a PhD in Renaissance Drama. She has taught courses on Shakespeare, science fiction short stories, fanfiction, and the mystery genre, and is now on the lookout for her next big project.
No comments yet. Be the first!