We are reprinting this review as part of our special Resistance issue. It first appeared at Strange Horizons on 28 November 2011. 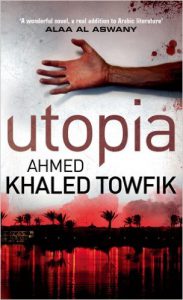 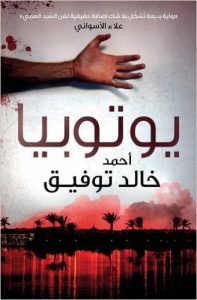 Human beings need a challenge. If they've got nothing to do, they crack up. This is not a new idea, particularly among the brave new worlds of dystopian science fiction. In Utopia, Ahmed Khaled Towfik attempts to detach boredom from its usual association with privilege by depicting a clash between the idle rich and the idle poor.

Utopia, the first novel by the prolific and popular Towfik to be translated into English, was published in Cairo in 2008. It was an instant bestseller, and has been reprinted four times. Set in 2023, it depicts a bleak Egypt divided into the pampered inhabitants of Utopia, and the Others. The people of Utopia have everything; the Others, next to nothing. Utopia is located on Egypt's northern coast, while the land of the Others comprises a ghastly Cairo devoid of water or electricity, where drug-addled and hungry youths hunt the few remaining stray dogs through defunct subway tunnels. The book has two narrators: a teenager from Utopia, who takes the name Alaa at one point, though it's clear this is not his real name; and Gaber, a young man of the Others. Alaa's sections carry the title "Predator." Gaber is the "Prey."

Alaa has everything, and he's bored. He describes his daily routine in a laconic style that communicates the monotony of his life: "I wake up. I take a leak. Smoke a cigarette. Drink coffee. Shave. Fix the wound on my forehead to make it look terrible. Have sex with the African maid. Have breakfast" (p. 16). Alaa goes on to puke on his mother's bedroom carpet, get high, and listen to "orgasm music," and he's out of things to do. The wound on his forehead—a decoration designed by an Israeli doctor—hints toward a central theme of the book: violence as entertainment. Alaa wants to go hunting. The hunt is the one thrill left to the youth of Utopia: stalking one of the Others, and cutting off an arm as a souvenir.

Alaa sneaks out of Utopia on a bus full of Others heading home after a day of work in rich houses. With him is Germinal, a girl from his clique and occasional sex partner—a weak character whose motivations remain unclear throughout the book. The two of them lure a young woman off to kill her and cut off her arm, but are discovered by a gang of Others before they can manage it. Gaber saves them, and takes them home to live with him and his sister Safiya until they can find a way back to Utopia.

Reading Utopia in 2011, it's impossible not to think of what's being called the "Arab Spring," and particularly the uprising that led to the fall of former Egyptian president Hosni Mubarak. The world of Utopia is an only slightly exaggerated twenty-first century Egypt, recognizable in the gap between rich and poor, the crumbling of government services, the privatization of space and resources, the anger at the links between the Egyptian, American, and Israeli governments, and the yearning for revolution. The strongest aspect of the book is its depiction of the frustration of young men, both rich and poor, who have run out of options. Alaa is bored and powerful, but Gaber, bored and weak, suffers the same debilitating sense of the meaninglessness of life. A life without dreams, Gaber thinks to himself, is "one looooo(what are you waiting for?)oooooo(nothing)ooong, grim present" (p. 52). That the very rich and very poor experience a similar "grim present" suggests that Utopia addresses those who are both poor and rich: the educated and unemployed young people who played such an important role in Tahrir Square. "A society without a middle class," reflects Gaber, "is a society primed for explosion" (p. 108).

While I suspect that Utopia is addressed primarily to a middle class in crisis, it does attempt a critique of ultra-wealthy inhabitants of gated communities. Unfortunately, this critique employs rape as its most prominent trope. Rape is a constant presence throughout the novel, from Alaa's "sex with the African maid" to his rape of Gaber's sister Safiya, which is meant to serve as a metaphor of class relations. Alaa is the bad guy, the "predator," so one might argue that the message here is that rape is bad. But Gaber, the good guy, also wants to be a rapist: he has Germinal drugged, intending to revenge himself on Utopia by raping her, but can't go through with it because she reminds him of his sister. Germinal, meanwhile, the spoiled child of Utopia, "loves it" when Alaa gives her orders and makes her do "anything" during sex, because "[i]t makes her feel defeated and titillates her masochistic streak" (p. 25). In contrast, Safiya surprises Alaa by putting up "a fierce and noble fight" when he rapes her (p. 131) and keeping quiet about it afterward because he's threatened to kill her brother: "the girl didn't talk. She was really honorable" (p. 134). In addition, each woman is an accomplice in the rape or attempted rape of the other. Germinal is angry when Alaa decides to rape Safiya—an anger he interprets as indignation that he would choose Safiya over her—but she doesn't protest until she thinks he's going to kill Safiya after the rape. As for Safiya, who is clearly meant to command the reader's sympathy, she drugs Germinal for Gaber, fully aware of his intentions, and washes the unconscious young woman to get her ready for the rape: "She ran her fingers over the girl's soft hair and said, 'Take your time. Her skin is smooth like children's skin. You deserve to enjoy yourself, poor thing. You need clean hair and smooth skin. Enjoy yourself'" (p. 115).

According to the logic constructed here, all men want to be rapists, but good men are unable to rape for sentimental reasons. Bad or politically compromised women enjoy rape; good women defend themselves physically, but are eager to provide their brothers with opportunities for rape. Nor is it possible to regard this as an attempt to show that everyone is compromised in some way, or that everyone has both good and bad qualities. Alaa's rape of Safiya, a full page of groans, cries, and upper-class excuses, removes this possibility by showing us exactly where to locate good and evil:

'Your poverty isn't our fault—unhh—don't you understand yet that you're paying the price for your foolishness, your stupidity, and your submissiveness? Unhh, unhh—'

This heavy symbolism establishes Safiya as representative of the betrayed Egyptian majority, forestalling criticism of her complicity in the attempted rape of Germinal. It plays on a false notion of women's "honor" as based on physical self-defense. And it distances the term "rape" from its literal meaning by filling it with a symbolic one.

The English edition of Utopia contains all the quotations from poetry and lyrics of "orgasm music" present in the Arabic one, but the Arabic text also includes snippets of journalism which do not appear in the English translation. These bits of text are not referenced, and may be fictional, but they have the form of quotations from actual newspapers. The longest one—nearly two pages of small print—is a list of statistics on the assault, rape, and murder of women. According to the translator, Chip Rossetti, the editors of the English edition chose to remove the journalistic sections to preserve narrative flow. This decision does a disservice to the book, for it is only in these statistics that violence against women is presented as violence against women and not metaphor.

There is an actual utopian gesture in Utopia: though it shows rich and poor as divided, it also insists on their similarity. "Here and there, we're both in love with violence," thinks Gaber. "Here and there, we both love drugs. Here and there, we both avidly watch movies about rape. Here and there, we both talk about religion all the time" (p.104). That the list of common attributes is largely negative (even religion figures in the novel as either hypocrisy or mere consolation) does not exclude a utopian subtext. If we have these bad traits in common, the novel seems to ask, can't we join forces to overcome them? Drugs, violence, rape, and hypocrisy are depicted as social ills to which a united society might find solutions. That one of these ills, rape, is treated so irresponsibly in the novel will cause some readers to reject the whole idea; others may find in Utopia what we usually seek in dystopian fiction: a concern for the present that we can use in defense of the future.

Like Loading...
© Copyright 2017 By: Sofia Samatar
About Sofia Samatar
Sofia Samatar is the author of the novels A Stranger in Olondria and The Winged Histories. She is the recipient of the William L. Crawford Award, the John W. Campbell Award, the British Fantasy Award, and the World Fantasy Award. Her first short story collection, Tender, is now available from Small Beer Press.
No comments yet. Be the first!