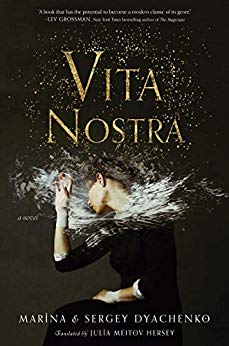 Vita Nostra, or “Our Life,” is a mercurial creature. The novel veers through the betrayals of first love, and the perils of life in a remote college in rural Russia, to the gradual unmaking of the world through the ruptive coordinates of another/a greater reality. This burrowing and glitching of habitual reality is engineered through the entwined explorations of linguistic limits and bodily transformations, leading to a genuinely unique addition to the fantasy megatext.

Lauded both in their native Ukraine and within a Russian-speaking readership, the work of Marina and Sergey Dyachenko has received numerous awards, including the European Science Fiction Society’s for Best Writers of Europe (2005). Along with Mikhail Elizarov’s The Librarian (2007) and, writing as Max Frei, Svetlana Yuryevna Martynchik’s Labyrinths of Echo series (2009-2014), the Dyachenkos are some of the few contemporary Ukrainian writers of speculative fiction (or “fantastyka”) to be translated into English.

To date, the Dyachenkos have one previous novel, The Scar (2012), which was translated into English by Elinor Huntington. This is a tale of deadly hubris and eventual redemption, which demonstrates the Dyachenkos' characteristic blend of genre-defying storytelling, skillful worldbuilding, and metaphysical speculation. The Scar also showcases the Dyachenkos' preoccupation with scholastic cultures and modes of learning, a locus of fascination which Vita continues with interrogations of how meaning is made, disseminated, and asserted. Excellently translated into a flowing English by Julia Meitov Hersey, Vita is the first book in The Metamorphosis trilogy. Translations of the rest of the trilogy, which shares the same world but not the same narrative, are tentatively also set to be released, although no concrete date has been given. In the meantime, their next book in translation, Daughter from the Dark, is due to be released in February 2020.

Vita begins with precocious teenager Alexandra Samokhina (or Sasha for short) and her mother arriving for a beach holiday. What should be a relaxing sojourn swiftly becomes anything but, as a shadowy figure starts to haunt Sasha’s every step. Despite her attempts to evade him, this figure proves as unrelenting as he is terrifying. He is Farid Kozhennikov, a seemingly omniscient, seemingly human figure who will become Sasha’s long-term (tor)mentor. Feeling checked at every turn, she balkingly submits to his bizarre request: that she swim the nighttime sea over several consecutive nights. Through bodily and mental discipline, Sasha completes this project, a success that catalyses a chain of further tasks which will eventually set her world askew.

At the insurmountable insistence of Farid (and to the pronounced disappointment of her mother), Sasha enrolls in the Topra Institute of Special Technologies, an unknown college of dubious credentials, nestled in the remoteness of rural Russia. Arriving to a cold welcome, she is subjected to another battery of flummoxing tasks, but rather than physical exertion, the school demands that students read intractable texts which “refused to be memorised” (p. 79). Compounding her frustration and confusion, repeated attempts to unriddle the purpose of this institution and the nature of its “special technologies” are met with intransigence. Eventually, these technologies are revealed to be magical, but magical in only the broadest, most mind-bending sense of the word.

So far, so Harry Potter? … No, very definitely no. Harry Potter for adults, then? Still no. Vita has been compared to Potter, alongside Lev Grossman’s The Magicians (2009), mostly because of their shared setting on a magical campus; but Torpa’s Institute of Special Technologies is an often gruelling building that has little to do with the grandeur of Hogwarts or the elite opulence of The Magicians’ mansion. And it is more than the building which is punishing in Torpa, and which marks Vita as a very different book. In particular, the intersecting themes of cohesion, discipline, and education play a very prominent role throughout. Various forms of threat are frequent, with one teacher informing a class that the Institute “does not tolerate doubt, uncertainty, and other forms of idiocy … you study here; otherwise, you will be dismissed and simultaneously buried” (p. 73). Forms of force are further entrenched through the arcane curriculum which sees Sasha “changing, fading internally, thinking somebody else’s thoughts. And she could not escape” (p. 145). So although I’m all for this novel finding the large readership it richly deserves, comparisons to Rowling and Grossman are superficial, and obscure Vita’s vibrant weirdness and complexity.

In (very) broad brushstrokes, across the fantasy genre there is a tendency to depict magic as a process whereby the recitation of specific phrases becomes the key through which a subject can materialise their will upon reality. The contingency of magic on linguistic mastery is frequently rooted in the idea of what Le Guin’s Earthsea has termed “true speech.” Knowledge of this true speech grants a magic practitioner access to reality at its most profound or foundational level. Vita is undergirded by an iteration of true speech, but the concept is given an informatic twist. Rather than featuring spells that extend human will and answer its needs, Vita subverts magical tropes to instead consider how transgressing the limits of language can radically break normative modes of perception, which can then be redeployed to invoke the could be into the what is. For these reasons, Vita might more usefully be compared to China Miéville’s exploration of language and alterity in his novel Embassytown (2011).

Sasha experiences exposure to the school’s unruly books as estranging encounters with language which are at turns terrifying, addictive, and rewarding:

If these were somebody else’s thoughts, they were so decidedly inhuman that Sasha was simply scared to imagine a brain naturally capable of producing these chimeras. At the same time Sasha already knew enough to see this—these exercises were astonishingly beautiful in their harmony. (p. 179)

Such encounters with alterity necessitate not just mental metamorphoses but concomitant recalibrations of her physical parameters. Thus the increasing acquisition of magic is intermittently played out across Sasha’s body: at random her skin becomes scaled, she gains a mechanical appendage from her sternum, and her perceptions expand until “she became the room” (p. 243). At one point “the world swayed; Sasha watched it through the skin of her cheeks” (p. 236). Increasing exposure to true speech, rather than emboldening the subject, instead necessitates the stripping away of notions of the human, demanding a metamorphosis into a dramatically different, more-than-human form of being in the world.

Education in the Institute is therefore about the dissolution of the known, and its unfolding into unanticipated vectors and trajectories, resulting in Sasha hearing “the crackling sound with which the threads that held together the familiar world ripped apart” (p. 144). Such destabilisations of bodily parameters are hence paralleled with the relinquishment of conventional notions of the human, affording access to another form of reality.

Despite these sophisticated investigations into the ruptive potential of language, the more-than-human, and intersecting realities, Vita Nostra is never anything less than addictive reading. Indeed, passages where Sasha is seemingly possessed by various texts did at times eerily mirror my own compulsive need to return to this book: its call was loud and urgent, a necessity. Again, such forms of hypnosis-reading are a testament to the Dyachenkos’ mastery as storytellers, as well as Hersey’s ability to translate such a complex and compelling text into English. Vita Nostra’s metaphysical flights into informatic fancy—via occasional references from quantum mechanics, Platonic philosophy, and Russian literature—are merely one of the reasons that Vita Nostra is one of the most challenging and enjoyable fantasy novels you’ll read in a long time.

Like Loading...
© Copyright 2020 By: Rachel Hill
About Rachel Hill
Rachel Hill has previously written reviews for Foundation, Shoreline of Infinity, and Femspec. Originally from North East England, she now lives in London. Interests include science fiction (the weirder the better), science and technology studies, and cross-stitch.
No comments yet. Be the first!