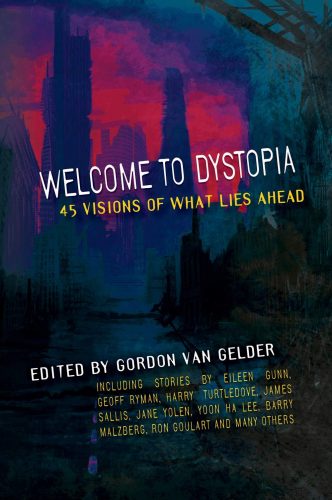 Welcome to Dystopia, edited by Gordon Van Gelder, is a collection of forty-five short stories set in the near future. Subtitled “45 Visions of What Lies Ahead,” the anthology offers contrasting snippets and frightening scenarios of the kind of life we might find ourselves living tomorrow. Indeed, while reading these stories, the reader gets the feeling that they are not so far-fetched visions of what might be: the dystopia is already here, and we are living in it.

I don’t intend to review every story in the collection. Instead, I will attempt to introduce you to the stories that struck these chords with me, and have stayed with me even after several weeks.

Through an exchange of emails between two sisters, “Re: Your Wedding” by Ruth Nestvold tells the story of a world that is no longer a global village connected through an information highway. Rather, state and private corporations have built firewalls to monitor and censor the “free” exchange of information—the truth about what’s already beginning to happen in our own world. Consequently, families are separated and the world divided into fragments as it once was, and still is for many developing countries:

I wrote you Feb. 28, but you don’t seem to have gotten my message. […] What kind of news coverage have you had of Eastern Europe over there lately? Could the NSA be filtering private emails now? […] I’m scared shitless. (p. 20)

“Sneakers” by Michael Libling, meanwhile, describes a nightmare that every individual must go through if they are perceived to be a threat or a terrorist by customs officers at the US border. It features a series of terrorist attacks across the USA—Montana, Idaho, Minnesota, Michigan, Pennsylvania, New York. There are no clues whether the attacks were planned by terrorists (or rogue elements in the government). You can trust no one, believe nothing: “They’re lying,” the narrator insists about the authorities. “Just like there’s no record of me being at the border. Jordy and I were played. Now you’re being played” (p. 15).

The story is told in a manner of a written confession; we don’t know where the lies begin in “Sneakers” and where they end. The actual sneakers stand for many things: Jordy’s dream and marathon journey, and later the narrator and Jordy’s crushed hope and defeat. “Sneakers” is a harrowing account of violence against humanity inside and outside its various territories. It’s frustrating and infuriating to place ourselves in the shoes of the hordes of people who are standing in line to cross a border: they are actually waiting for their turn to be interrogated, humiliated, arrested, or killed. The writer manages to capture the paranoia, mistrust, and hatred surrounding citizens of color, minority gender, and minority religion demonstrated at US installations with armed guards, whether in the US or elsewhere.

While the terrorist threats loom large over the country, K. G. Anderson’s “Everything is fixed now” shows the role private companies are playing in today’s global economy. Through a “Vibrante” device for personal fitness, companies in this story can collect data that provide insight into the health of their users. Companies use this data to save money—on health insurance premiums or sick leave—rather than human lives:

Lily Pang was removed from her job. […] When Comette let her go, they didn’t tell her anything about a heart problem, or advise her to see a cardiologist. (p. 37).

”, takes the form of an email thread being monitored by the surveillance state while the world crumbles down around our protagonists:

The National Guard has already been deployed in Des Moines, where I’m staying with some friends. Nobody you know, and I don’t want to say who, because you never know who’s reading this anymore […] (pp. 78-79)

The last email in this thread is surreal: “Mail Delivery Subsystem - Address Not Found. 1:52 PM (0 minutes ago)” (p. 79).  (I have often wondered if the bounce mails are sometimes not erroneous, but intentional.) If the media are an extension of our senses, our body, then erasing the media—our digital identities, our inboxes—could feel like a death sentence. When the state can deny you a service or limit your options about where and how you can live, move, or travel—when they can use an app on your device to track your movements, spy on you, and force you, your children, and relatives to make the best of the worst choices they make available depending on your obedience and compliance score—you are no longer free. And I’m afraid this is the future in the new capitalist world order—if, that is, we don’t fight, if we don’t resist, if we don’t stand up for the rights of the citizens who can’t stand up for themselves across the world.

Harry Turtledove’s “The Terrific Leader” is like watching the opening scene from Quentin Tarantino’s Inglourious Basterds—all hope is lost; there is no point in fighting. The menacing presence of that film’s Nazi SS colonel Hans Landa is evoked in every scene of this story by the television, which is always listening and watching what citizens do and say: “The communal televisor, like authorized radios, got only government-mandated channels so no one could be exposed to outsiders’ wicked lies” (p. 103).

A double caricature of the current Korean and American presidents, the Terrific Leader, is at the centre of all of this. Wearing his trademark red cap with the slogan—MAKE AMERICA GREAT AGAIN!—the old leader promises to end crime and violence and restore prosperity in the country once again, even while citizens are starving. In this story at least, the US is no longer a stellar democracy. Everyone knows the Leader will be succeeded by one of his sons or son-in-law, but the narrator tells us that even thinking such thoughts is “risky.” And the punishment for speaking against the Terrific Leader is unspeakable horror.

Similarly, and shockingly, hard-hitting is Michael Kandel’s one-page story, “Precaution at Penn Station.” It packs a lot of action and conflict within a flash format. When the state can persecute a group of its minority citizens without any trial, you can be certain there is nothing that can stop them from coming after you or your family whenever they want to. In a similar vein, “Newsletter” by Jennifer Marie Brissett is Fahrenheit 451 in flash format:

You should also know that your electronic orders through the net are being monitored as well. / The words are disappearing. Books on my shelves are being bought and replaced. (p. 145)

Authoritarianism is present, too, in Yoon Ha Lee’s “Welcome to Triumph Band.” In this, a congratulatory acceptance letter arrives with parents of future US Naval Band Academy cadets. Any parent reading this letter would lose sleep worrying about what awaits their children at the academy. It sounds more like a threat than a warm welcome: “As long as you remember to honor our Great President and the achievements of our Great Nation under his leadership, you should do well,” it reads (p. 170).

In “Loser,” Matthew Hughes likewise warns that those who dare to defy the will of the state will be sentenced to breaking their backs building “the Wall” while serving their jail sentences. It’s one of the longest and most satisfying stories in the book, along with Ted White’s “Burning Down the House.” In this latter story, a fourteen-year-old girl from a ghetto is sold to and raped by a citizen of the Closed Zone. She tells us that there are only two kinds of people in her world: “the rich and the rest of us” (p. 219). The rich believe they are a superior race and talk about “breeding a super race.” They regard her kind—the poor who barely survive on the margins of the world, outside the CeeZee—as “vermin, wallowing in filth.” Now, the rich are burning them out. And the little girl refuses to play the victim card; she is a fighter, a rebel, determined to play the tough game, and show who is really “uber.” She is a natural leader, and you can’t stop admiring her spirit and resolve.

Leo Vladimisky’s “We All Have Hearts of Gold®,” on the other hand, shows how good it is by making me laugh. As a former advertising professional, I found the story’s creative brief, use of hyperbole, and final copy bang on. It takes the magical thinking of advertising to convince (brainwash?) men to serve and represent the "brand values” of a rightwing paramilitary group. Whether it is Islamic State, neo-Nazis, or white supremacists, or Muslim-and-Dalit-bashing lynch mobs, everyone needs to manage media today. In Vladimisky’s satire, the competition in this realm is fierce, and any self-respecting fascist needs to get their message out in the most memorable and impactful way: just because some are in the business of killing people, doesn’t mean they are not losing sleep over their Return on Investment (ROI)—including key personnel in the divisions of the United States military.

In these stories as in our own world, the global elites know how to hack any democracy from both inside and outside a country’s borders. While his American counterpart tweets, the prime minister of India refuses to speak to the press—and when he does, it’s pre-scripted. Obviously, right? Modi’s made-for-television “open interaction” is actually frightening to watch: when you see the kind of bubble our leaders live in, you begin to understand why change is necessary. The only problem is: who is the alternative? After all, through the constant manufacturing of propaganda, consent-through-media blitz, and “alternative truths,” savvy interest groups can now hack individuals and turn them into malleable citizen-workers for the rich. We thought the internet would make us free. We were wrong—unless we’re ready to do what it takes to fix our democracies.

In "Newsletter," a former local bookstore owner wants a set of books to be saved from the ongoing purge:

The Fire Next Time by James Baldwin
A People’s History of the United States by Howard Zinn
Kindred by Octavia E. Butler
The Plutonium Files by Eileen Welsome
Fortunate Son by Gary Webb
Letter from a Birmingham Jail by Martin Luther King, Jr.

If you haven’t read these books, perhaps it’s time to do so before they disappear from the mind-database of the world. And in the coming elections, vote wisely. If you don’t, be prepared to register your vagina or what have you at the nearest Registry. It’s compulsory. If you think I’m joking, read Lisa Mason’s story, “Dangerous.” Welcome to Dystopia is a must-read—and may well be worth adding to your own list of books to pass on to the next generation in any such dystopian scenario.

Like Loading...
© Copyright 2019 By: Salik Shah
About Salik Shah
Salik Shah is a writer and filmmaker. His work has been nominated for Toto Awards and Kumaon Literary Festival’s Fellows of Nature, and one of his short stories appears in a course syllabus at SOAS University of London. He is the founding editor of Mithila Review, with media appearances around the world.
No comments yet. Be the first!