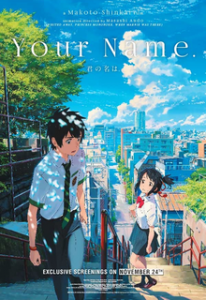 Makoto Shinkai emerged as a promise in the anime world with his independently produced 2002 short Voices of a Distant Star. That twenty-four-minute film used the familiar anime tropes of teen romance and giant robots to explore the concept of social isolation and miscommunication in twenty-first-century Japan while telling a touching and heartbreaking story, beautifully drawn and animated.

As has been the case for many other promising debutantes, Shinkai had a hard time delivering on the promise of his first film. His two feature-length films, The Place Promised in Our Early Days (2004) and Children Who Chase Lost Voices from Down Below (2011), were overlong, dragging affairs. His shorter projects, 5 Centimeters Per Second (2007) and The Garden of Words (2013), fared somewhat better, but still lost momentum as they progressed, highlighting Shinkai's main problem in telling stories: he's very good at starting them, but somehow loses focus and energy around their middle, becoming tiresome when approaching the end.

Shinkai's new feature-length film, Your Name, which at the time of this writing is on its way to succeed Hayao Miyazaki's Spirited Away (2001) as Japan's top-grossing anime film of all time, overcomes this problem by dividing its one-hundred-minute runtime into two linked yet distinct stories, each roughly fifty minutes long.

The first story follows two high school teens—Mitsuha, a girl who lives in a small town in rural Japan, and Taki, a boy from Tokyo. At the beginning of the film, Mitsuha and Taki experience brief periods in which they find themselves swapping bodies, and, even after the initial shock, discover that they're having a hard time adjusting to each other's lives. What starts as a gender-bending comedy turns into something deeper as the film progresses: Your Name isn't just a film about gender and the social roles people play, it is also—perhaps chiefly—a film about the difference between two social spheres, the urban and the countryside, and the artful way in which Shinkai captures each.

The film emphasizes how Shinkai is a director of scenery every bit as much as (and perhaps even more than) he is a director of characters. Beyond the beautifully designed backgrounds, Your Name delivers a unique feeling of rhythm for each location: the big city is a place of constant movement and quick changes, whereas the small rural town is a place of traditional stillness. Each of the protagonists—even in his/her own body—does not feel in complete sync with his/her surroundings. Shinkai does not idealize either modern life or tradition: they equally represent some kind of dysfunction, especially when it comes to family life, for both Mitsuha and Taki. The many amusing and charming moments that await the audience in the film's opening scenes slowly give way to a more downbeat view of life in twenty-first-century Japan by the end of the film's first half.

Then, in its second half, a plot twist takes the film in an entirely different direction. Revealing this twist would be completely unfair to those who have not seen the film yet, so I will not expose it here. Suffice it to say that, in its closing fifty minutes, both protagonists find themselves struggling against the social constraints that bind them, not so much because they want to but because they have to. And much like the film's first half, this storyline starts mostly as one thing—a quest for survival—and turns out to be another thing as it progresses, a struggle for the future of something much bigger. The first fifty minutes of Your Name are all about the study of two flawed but irresistibly lovable characters; the following fifty minutes are a breathless race against time that both characters are engaged in.

Shinkai has expressed his embarrassment at being labeled "the next Miyazaki," but the comparison becomes inevitable with Your Name, and not just because of its box office performance. There are references—mostly subtle, but a few less so—to Miyazaki's work throughout the film, notably to My Neighbor Totoro (1988) and Spirited Away in the portrayal of country life and the link between identity and memory, but the more substantial Miyazaki influence on the film is in its themes. As in his previous films, in Your Name Shinkai applies the deep emotional core typical to Miyazaki's films to the age of video games (the industry from which Shinkai came) and cell phones—and, more importantly, to the post-Fukushima era. It is here that Shinkai abandons the fondness for bitter endings that typified his earlier works in favor of a Miyazaki-like optimism: he ends his film in embracing the joys and the passions of life, insisting that they are possible even in the shadow of a great trauma, and in fact are necessary in order to recover from the same. Beyond its beautiful backgrounds and captivating characters, it's this unapologetic optimism that the audience is likely to remember at the end of Your Name—and also what makes Shinkai's film a triumph.

Like Loading...
© Copyright 2017 By: Raz Greenberg
About Raz Greenberg
Raz Greenberg divides his time between working as a content editor, lecturing on comics and animation in several academic institutes, writing reviews and articles for a variety of publications (Strange Horizons, Tablet Magazine, and All the Anime, among others), and writing fiction. He muses about overlooked genre classics at the Space Oddities Facebook page.
No comments yet. Be the first!