Articles, Non-Fiction
Size / / /
Stories from the Radio
By: Kuzhali Manickavel

Today I thought I would listen to something called “The Author and the Thing.” This is not a great title. However, I feel we should not hold that against the show because frankly the Thing could be anything, which is an exciting prospect, which is what I always tell myself. Also this one is from 1936 so it may contain cool commercials encouraging us to smoke or get Lysol douches. 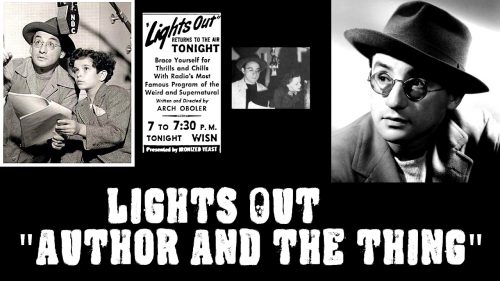 I don’t really know who Arch Oboler is but I think he is famous for writing radio plays, so just to be safe, Wow!

There is a cautionary warning that these stories are not for the timid soul. Not sure if they mean me specifically.

If you frighten easily, you are advised to turn off the radio now. Golly.

I like how they give these warnings. It’s very considerate.

And of course there’s the gong. So many of these shows have a warning and a gong.

The phone is ringing!

The phone is being answered!

It’s for Mr. Oboler. He’s also the dude in this I guess.

Because he is Arch Oboler, he has someone to answer the phone for him.

I guess he has to write a story or something?

I did not know writers could have people to answer their phones for them.

The person answering his phone is his secretary. He has a secretary because he is Arch Oboler.

I do not have a secretary.

I do have a finger puppet that is supposed to be a mouse but it looks more like … I don’t know what it looks like actually.

This story is not that interesting so far, even though Arch Oboler.

Mr. Oboler is ruminating about how weird it is to talk about angels in a place where he has written about so many non-angel entities.

The secretary apparently gets frightened from working on all these frightening plays which are so frightening.

After a very tedious exchange, which included the words “they’ll be using me as exhibit X in the psychopathic ward,” they are going to get to work.

What does that even mean but?

'Tis not for us to know, tis only for us to listen and snark about what we hear.

So he has decided that the first character in the show will be Jack Helman.

This is already very disturbing.

Mr. Oboler says he can’t write another one of these things, which is good because it wasn’t going very well anyway.

The secretary has been sent away because Mr. Oboler just can’t keep writing these things I tell ya, he just can’t!

I think there was a sound because he said “who’s there” but I didn’t hear anything.

It was the wind ya’ll.

He keeps saying that he is going crazy in different ways so I guess that is what will happen now.

Mr. Oboler’s next story idea: Press agent named Black killing a man named White. The obvious thing to say here would be ‘sounds racist’. But I’m not going to say that.

Why a press agent though?

He’s had some other ideas but I wasn’t really listening tbh.

He just said a bunch of stuff I didn’t understand.

Ok cool he didn’t understand it either.

He is now writing another idea about a monk in a monastery and a monster and a village.

Now he’s looking for a book? I’m not sure what’s happening.

Now there is a mumbling sound in the back.

Not really mumbling, sounds like a dude saying umumumu.

Now someone’s knocking on the door.

It’s some dude and Mr. Oboler is telling him to get out.

Why tho? Seems rude.

The dude cannot see or hear umumumu but Mr. Oboler can I guess.

Ok what happened is suddenly Eli started saying “help” and Mr. Oboler said let go of my brother, so in this way, we have learned that Eli is/was his brother.

The gong has gone again so I guess that means Eli died.

I think two guys are now doing a police parody?

I think they are supposed to be Irish. Like, Lucky Charms Irish.

A Lucky Charms cop said Mr. Oboler “claims his brother was eaten by a monster.” From this we can see that things are not going to go well for Mr. Oboler.

Everyone on this police force seems to be Lucky Charms Irish.

They apparently can’t see umumumu either.

I’m not clear if Mr. Oboler can only hear umumumu or can see him too. It’s a real mystery.

They have decided to take Mr. Oboler down to the station so he can cool off in the can.

I lol’d because I thought of can like toilet-can.

I am four years old.

After some exchange which was not so interesting for me, the police officers have recognized Mr. Oboler as that guy from the radio.

“The guy who always makes his cops Irish”—HAHAHAHAHA nice one.

The Lucky Charms Irish cops ladies and gentlemen, let’s give them all a big hand.

So I think Mr. Oboler wants to leave and umumumu is not agreeing to this.

Now some other lady has come in and Mr. Oboler is telling her to get out.

The lady is now saying no no no so I guess umumumu is eating her.

Oh the cops are back!

Now Mr. Oboler is asking for a gun so he can shoot the thing.

I guess he can see it then.

I mean one hopes he can see it since he wants to shoot it.

One of the cops just said something and I didn’t understand any of it and then the gong happened.

So now I guess Mr. Oboler is in jail and he’s talking to someone who is saying things are not looking good for Mr. Oboler.

Mr. Oboler seems shocked that no one believes that a thing he conjured up in his head came to life and ate two people and said umumumu.

A very tedious exchange is going on which I decided not to listen to.

They have appointed a lunacy commission, if that’s of importance to anybody.

So his brother is apparently on vacation right now and not being digested by umumumu could this be true?????

Another tedious exchange is happening which I am not listening to.

Mr. Oboler is like maybe umumumu only exists if he thinks about it.

I’m guessing he will think of umumumu now and then it will eat the lawyer.

Mr. Oboler I think tried to kill umumumu and then I don’t know what happened.

Ok now I think we are listening to the lunacy commission for some reason.

Does he wear conventional shirts? Is that what they said?

Why did they say that?

Can any of us honestly say we wear conventional shirts tho?

Now they seem to be saying the word “voices” for fun.

The lunacy commission has decided that Mr. Oboler has dementia brainplops.

So now Mr. Oboler is in an “insane asylum.”

I think he’s calling umumumu on the nurse?

Why did you think it would not eat your mother tho.

So he was just imagining all this I guess.

And now it’s the umumumu for realz this time.

And that’s the end!

Well, I was definitely disappointed that there were no cigarette and Lysol douche ads. I liked umumumu very much. And finally, let’s take a moment to appreciate the whole “they’ll be using me as exhibit X in the psychopathic ward” trope, without which this story would not have been possible.