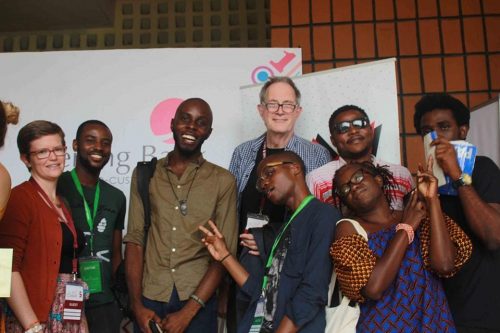 The Ake Festival is too much fun to write about dutifully. I want to show you.

Above, at the 2017 Festival, the SFF crowd had an unofficial lunch and discussed how we would take over the world. From left to right: Grace Duggan, Tolu Daniel, TJ Benson, Geoff Ryman, Dare Segun Falowo, Mazi Chiagozie Nwonwu, Ayodele Olofintuade, and (hiding) Ikechukwu Eye Kay Nwaogu.

First off, the trip by bus or car from Lagos is always exciting. In 2016, about midnight, I found myself travelling with Tendai Huchu, author of The Hairdresser of Harare. 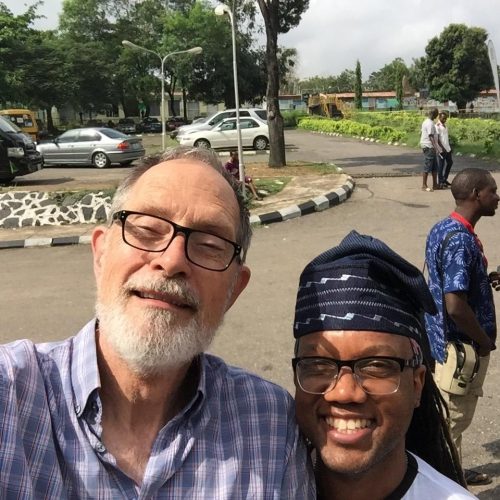 As a guest, delightfully, you will get sent on a panel to one of many local schools to hear children read their own fiction. The young writers of the best stories get a book of their choice as a prize. 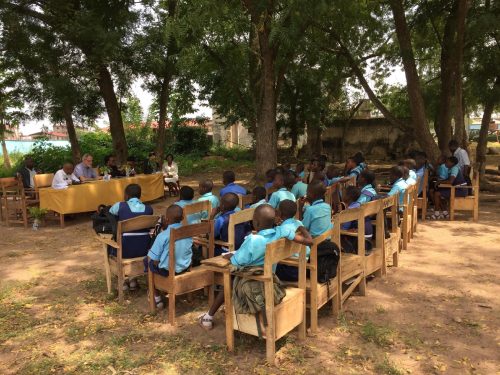 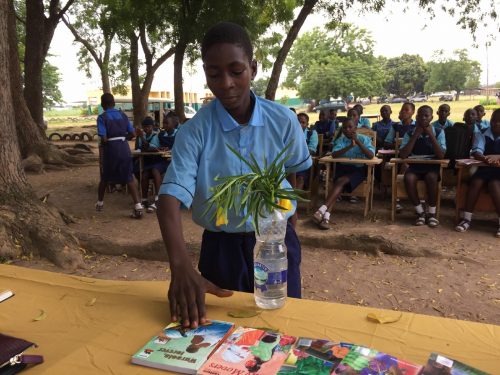 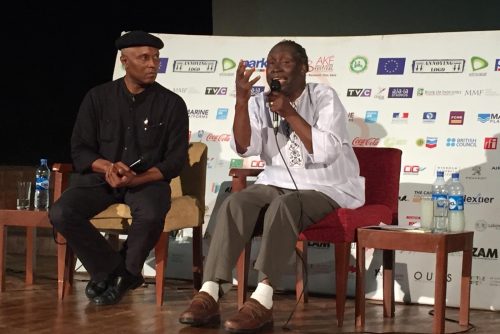 I asked Professor wa Thiong'o if his novel Wizard of the Crow was a fantasy novel and he said, “Without doubt.”

Professor wa Thiong’o’s story “Why Humans Walk Upright” is at the core of the Jalada collective’s The Language Project. The story was translated from Kikuyu into twenty-three other African languages (two years later, that had risen to fifty). At the closing ceremony, in the professor’s honour, readers from all over Africa read the same paragraph from the story in their own language—and the Yoruba version, translated by Kola Tubosun, made its world premiere. Sitting in the front row, preparing to read, are NoViolet Bulawayo (author of the prize-winning novel We Need New Names) and Hadiza Isma El-Rufai (author of An Abundance of Scorpions). 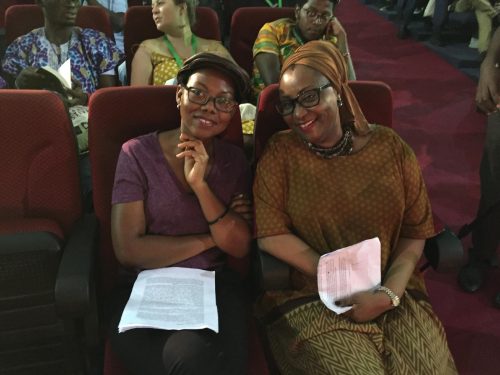 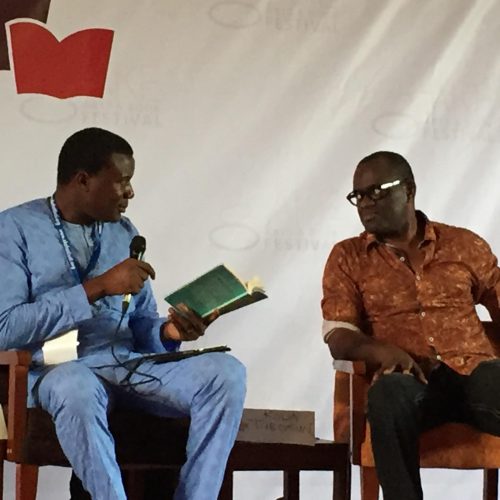 More than a festival about books, Ake puts on plays and entertainments. 2016 saw an African adaption of John Webster’s The Duchess of Malfi. In 2017, an adaptation of Lola Shoneyin’s novel The Secret Lives of Baba Segi’s Wives explored how polygamy can be turned to women’s advantage. But the performing highlight both years had to be, my God, the musical concert.

On the way to Ake I met on the bus a really delightful, funny, soft-spoken person. So modest and calm, and she turned out to be the memorable singer-songwriter Joyce Olong, one of the stars of the 2017 concert.

In 2016 and 2017, so graceful and beautiful, the refined traditional singing of Adunni & Nefertiti was so well-received, and you can get a taste from this small video. But as Kolade Arogundade warned me, the national treasure Salawa Abeni was a life-changing experience. I have never ever seen a performer work a crowd like she does. The video is too large to upload.

The support given to African SFF by Ake is humbling. Here is the 2016 panel on African science fiction. From left to right: Tendai Huchu (joint winner of the 2017 Nommo Award for Best Short Story), Chinelo Onwualu (co-founder and editor of Omenana magazine), me as the moderator, and Shadreck Chikoti reading from his Nommo-shortlisted novel, Azotus the Kingdom. Shadreck is the publisher of the anthology Imagine Africa 500. 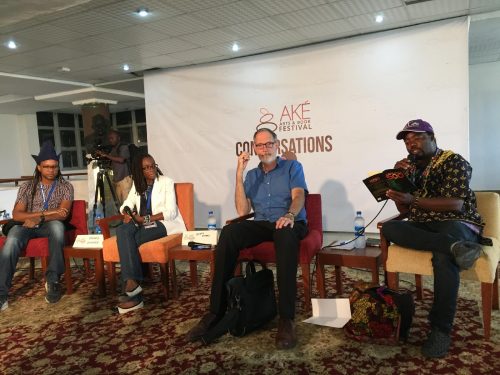 The 2017 Festival made the first Nommo Awards part of the opening ceremony. Just before that event, Jide Martin, CEO of Comic Republic, which had two titles nominated for the Nommo Award for Graphic Novel, met Nnedi Okorafor. 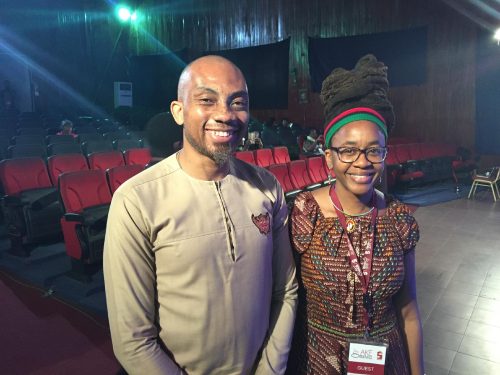 Accepting the Nommo for Best Graphic Novel is Kolade Arogundade, associate editor of the Chronic, which won the award for its “The Corpse Exhibition and older graphic stories" issue (photo by Brittle Paper). 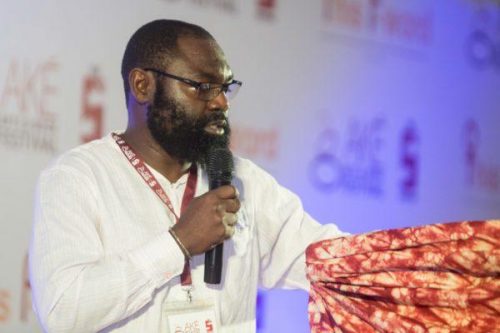 Brittle Paper carried a complete report on the Nommo Awards—the nominees and winners with more photos.

This informal shot is just before the Book Chat discussion between the great Nnedi Okorafor and South African award-winner Diane Awerbuck. 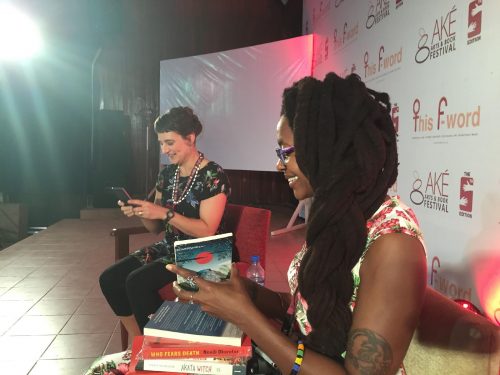 Olumo Rock in Abeokuta (“under the rock” in Yoruba) is something most visitors to Ake are taken to see. During the war, the Egba people and their army hid out of sight in its depths. I got to visit with Nnedi, Diane, and Dare Segun Falowo. 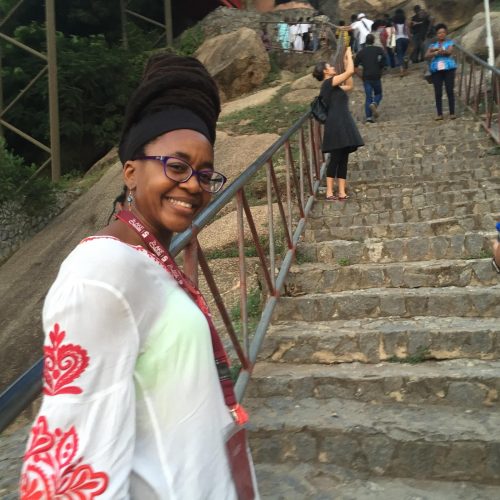 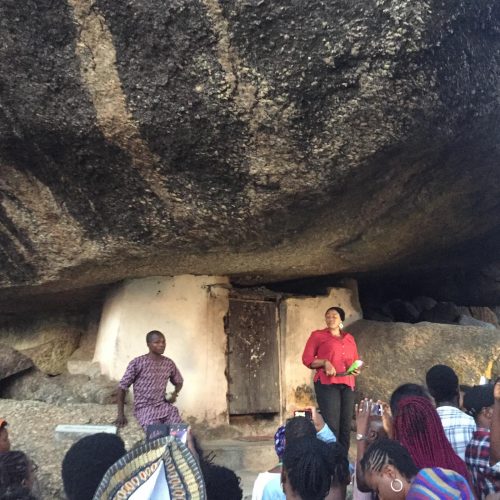 Even leaving Ake Festivals is fun. In 2016 I travelled to Abuja with two writers you will meet in the next chapter of this series, Odafe Atogun (far left), author of Taduno’s Song, and the redoubtable Chinelo Onwualu (middle right). 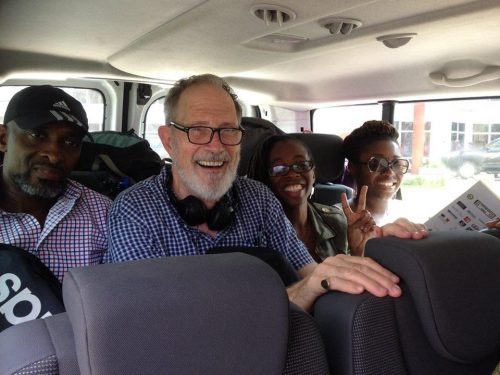