Non-Fiction, Reviews
Size / / /
The Core of the Sun by Johanna Sinisalo
By: Aditya Singh 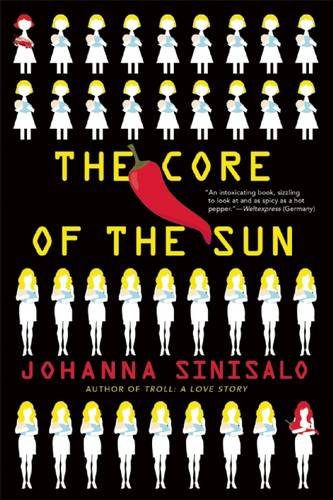 What makes a dystopia seem plausible? Is it the portrayal of a society brought to its knees through totalitarian and repressive measures, or one in which the citizens of that society have been lulled into a sense of complacency, taught that self-determination is a path towards ruin, convinced that they are better off living under a paternalistic State? In a 1949 letter to George Orwell, Aldous Huxley wrote that he didn't believe that the torture and subjugation Orwell wrote of in 1984 (1949) was necessary to subdue a population. The better way was the one suggested by him in Brave New World (1932):

Within the next generation I believe that the world's rulers will discover that infant conditioning and narco-hypnosis are more efficient, as instruments of government, than clubs and prisons, and that the lust for power can be just as completely satisfied by suggesting people into loving their servitude as by flogging and kicking them into obedience.

Johanna Sinisalo's The Core of the Sun adopts an approach similar to Huxley's in creating its dystopian Finland. A blurb review compares it to The Handmaid's Tale (1985), and in the manner in which women have been reduced to second class citizens, conceived of as primarily for the purpose of reproduction, it does inhabit a space similar to Atwood's novel. The ways in which Sinisalo depicts this system, however, are radically different from Atwood's.

Sinisalo's novel is set in “eusistocratic” Finland—a welfare state that holds the health and well-being of its citizens above all else. In order to achieve the same, the state has resorted to eugenics. In this alternative present, women have been divided into two sub-species, eloi and morlock: the former are submissive, used for sex and procreation, and concerned above all with winning the attention of men; the latter are intelligent and independent, sterilized and forced into menial labour to prevent them from carrying their defective genes further.

Vera, the novel’s protagonist, was born in a body the authorities categorize as belonging to an eloi, but her intelligence poses a problem for both her and the authorities: she possesses the “unfeminine” traits that have been ascribed to morlocks, and the fact that she is able to pose as an eloi challenges the deterministic categories the authorities have imposed on women; but to avoid being identified as a morlock, Vera also needs to conceal her intelligence from the authorities—and, with some assistance from her grandmother, she passes the examinations through which women have their categories specified. Vera is resourceful, and, since she is capable of presenting herself as an eloi, she resists the authorities in ways that straddle outright rebelliousness and small compromises.

She is, for example, very much addicted to chili peppers—which are banned in Finland because of the drug like properties of capsaicin—and is also searching for her estranged sister, Manna, who went missing after her marriage. The news of her missing sister combines with the death of her grandmother to leave Vera broken—and it is only with the help of the periodic fixes she gets from capsaicin that she is able to cope up with a perpetual sense of loss. Using the tolerance she has built against capsaicin, Vera gets involved in the illicit trade of chili peppers. Here she is able to utilize her double life as an eloi to the fullest, sneaking around cemeteries and behind bushes, pretending to flirt with customers while striking a deal, in order to fool the authorities.

But Vera's rebelliousness is not all that's there in the novel. Sinisalo, who has previously dealt with similar issues of the commodification of sexuality, love, and jealousy in her short story “Baby Doll,” contends that dividing humans into hierarchies does not invite resistance, but meek compliance, as groups and individuals fight for the smallest advantage over one another. In The Core of the Sun, men, too, are subject to dualistic labels—mascos, virile or strong men, are placed in opposition to the minus men who cannot reproduce owing to chronic illness or physical deficiencies—while elois are taught to trade gossip, develop a sense of superiority, and often grow envious in their competition over a masco. While Vera's double life aids her in many ways, then, it also severs the weak thread that once held her together with her sister. In the letters Vera writes to Manna, she acknowledges the fact that copying her sister in order to fit into the system also pushed them apart: they both developed rivalry over a masco, common among elois, and her attempts at protecting her sister only furthered the divide.

On occasions Vera comes across as an individual who has found ways to work around the hierarchical system of this Finland, and is content so long as she wins small advantages from her double nature. While the novel often seems to be heading towards a happy ending, the best it offers the reader is a fleeting sense of closure. While the protagonists have not succumbed to the workings of dystopia, they have also been unable to find a way out of it, and resistance has provided only a half victory of sorts.

Piecing together traditional narrative structure, epistolary chapters, excerpts from magazines or newspapers, and conversation transcripts, The Core of the Sun creates a world that moves from the absurd to the hostile to the hilarious. The excerpts delve into the history of Finland, where magazines named “A Short History of the Domestication of Women,” and “Emancipation and the Sex Life of the Human Male,” describe periods when the country was headed towards ruin because citizens had been provided with too many choices: in what was a perversion of the order of nature, women had set towards a path of emancipation. Sinisalo provides apt descriptions of the nature of a masculinity that seeks dominance and control, and often responds in violent ways when its needs go unfulfilled:

“The period between 1820 and 1880 is a shameful mark on the history of the Finnish people and its social system, and a strong warning to us. It showed us that ordinary, respectable young men can be completely corrupted when their basic rights are neglected. Marriage and the position of natural dominance and regular enjoyment of sexual intercourse—so important to a man’s personal well-being—that marriage provides are fundamental rights that the state should have granted and protected for the good of society instead of allowing deviant behaviors to foment to the point of acts of murder.” (p. 141)

This violent upsurge has been described in the novel as a result of the lives of prosperity which Finland’s citizens had started to lead after a period of abundant production in agriculture and grain storage made alcohol easily available, and the traditional norms of society were quickly eroded:

“The idleness of an unmarried state, the ubiquitous availability of alcohol, and young men’s competitive nature combined like sulfur, charcoal, and saltpeter to form a volatile mix that needed only a little spark to cause a tremendous explosion.” (p. 141)

This period in Sinisalo's novel plays an important role in determining the political organization of eusistocratic Finland. In our world, the same period was characterized by the development of nationalism in Finland: a Swedish speaking elite promoted Finnish culture in order to encourage the project of nation building. While the county soon came under the rule of Tsarist Russia, the Revolution of 1905 saw the establishment of a Parliament, and Finland was the first country in Europe to grant its citizens universal suffrage. Later granted Independence by the Bolsheviks, in the years following World War II Finland developed a welfare state that was to intervene benevolently on the behalf of its citizens. The idea of State intervention is taken to sinister levels in The Core of the Sun, and the eusistocratic State of Finland, admonishing the hedonism that had corrupted society, brings in a blanket ban on luxury goods, combined with strict control of border areas to prevent the smuggling of those substances, such as alcohol and tobacco, which are considered “demoralizing to the public health and destructive to human welfare.”

The precariousness of disorder is replaced by a system of control that is just as inimical to the betterment of individual lives: a rejection of the idea that self-determination, of choice as a concept, of the idea that either of these qualities is necessary for human beings to flourish.

The subjugation of women and repression of their sexuality becomes necessary for establishing the eusistocratic state:

… a woman’s sex drive is at its base a wish to marry—instead of basic sexual satisfaction, she has a lust for the joy of motherhood. This entails a female desire to surrender to male control and thus find a fitting place within society. This quintessential female characteristic has been a protected and encouraged trait throughout the history of eusistocracy, because it produces unparalleled peace and well-being in the family. (p. 209)

This system of eugenics that Sinisalo uses in the creation of her eusistocratic Finland was once deemed entirely plausible and ethical. The nineteenth and twentieth centuries were rife with the belief that humanity's fate rested on its ability in allowing only the stronger to breed. This was not a belief held by Conservative or far-right thinkers—in Anticipations, HG Wells (a Fabian Socialist), who of course originally coined the terms eloi and morlock in his The Time Machine (1895), wrote extensively on preventing the “People of the Abyss” from reproducing. Sterilization was seen as a method of Socialist Planning that would help in creating a world populated by the “fitter.” These ideas were later disowned not because they were wholly unscientific, but because they were used by the Nazis to justify their 'scientific racism' and concentration camps.

Sinisalo is critical of the paternalistic or authoritarian State that intervenes in every aspect of individual life, and which attempts to control the direction social and political life is supposed to take, but not much can be said of her positions on the role of the Welfare State in economics or society. There are, however, instances of characters discussing what is desirable in the “decadent democracies” that do suggest an obvious inclination towards universal suffrage and self determination:

“I realized some other things, too. At first vaguely, then more and more clearly. That there were people who knew more than I did. People in high places, and from those high places they could see things that ordinary people can’t see. Not just see them, but do things behind the scenes to influence my life in ways I couldn’t predict.

“That there might be something desirable in the decadent democracies.” (pg. 179)

Dystopian novels are often treated as allegorical during turbulent times, and the recent political atmosphere has undoubtedly been distressing. But there is an something odd, something groupthinkish, in that quick reflex of picking up a dystopian novel, using it to move towards quick cynicism, and treating the present as one headed inevitably towards calamity. When seen in the light of history and ideas that are barely a century old, Sinisalo's novel instead seems to hold a mirror to our current world. One passage in the novel, titled “A Few Words about Sterilization and the Sterilization Law” is from a real life source, a Finnish magazine praising a Sterilization Legislation enacted in Finland in 1935.

The work Sinisalo's novel does best, then, is in showing us how easy it is to be comfortably complacent in a mockery of life, tempted into ignorance of the systematic operation of the insidious, ostensibly well-meaning, decisions of those we give power over us. A moment of studied thought reveals that the present is an absolute consequence of the past, sketched by our hands.