Non-Fiction, Reviews
Size / / /
The Prey of Gods by Nicky Drayden
By: K. Kamo 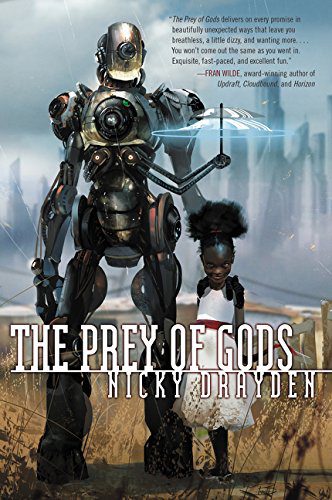 There's a lot to like about Nicky Drayden's first novel, The Prey of Gods, a lively urban fantasy set in a near-future South Africa. It bears some comparison to Lauren Beukes's Zoo City (2010), and, much as that novel won its author the Arthur C. Clarke Award in 2011, I wouldn't be surprised to see Drayden on a few “best debut” lists come the end of the year. Here and now, however, she's given us a world in which, instead of Beukes's magical animal familiars externalizing the characters' guilt, everyone has robotic “alphies” as their helpmeets. These robots are just beginning to become self-aware, and many are not so happy with how they've been treated.

The alphies are not the only ones embarking on journeys of individual emergence; there's a revolving cast of POV characters, each of whom, we very quickly learn, is hiding from the people around them a more traditionally internalized guilty secret. There's Muzikayise, star fly-half for his school rugby team, who harbors a crush on one of his teammates; Wallace Stoker, cismale politician by day and transgender cabaret act by night; and Riya, an incandescent pop diva concealing her MS from everyone but her drug dealer. In amongst these more mortal characters mingle Sydney, an ancient demigoddess reduced to slumming it as a nail bar employee, and the newly deified Nomvula, an eight-year-old with all the fresh reserves of power Sydney now lacks.

It further transpires that while Sydney and Nomvula are connecting with their inner goddesses, all of humanity is in fact descended from Earth's original deities. When a new designer drug called godsend appears on the scene it activates long-dormant aspects of its users' divinities, allowing individuals to manifest to other users as crabs and dolphins (this will make more sense later), while also giving them access to abilities such as telepathy and memory erasure. Sydney is the main antagonist, and she concocts a plan to spread a virus to make people even more susceptible to the drug. Nomvula is quickly swept into her thrall, and the other characters find themselves more or less unwittingly ranged against her. Throw in some mecha fights and genetic engineering gone wrong and it's fair to say there's a lot going on.

The alphie obliges. Ambient music from one of the tracks from Riya Natrajan's latest album, Midnight Seersucker, fills the room. The discordant beats cut right to the soul, and her shrill voice sounds like a couple of tomcats in a blender, but oh man does it hit the spot. Muzi claps his claws to the rhythm of the snare drum, and just when he gets it down pat, his arms and hands become his own. (p. 8)

The prose is that most surprisingly controversial of things: “readable.” It trips along in a breezy manner which doesn't demand too much of the reader but which I really enjoyed—enough, even, to allow for sentences like, “Riya Natrajan goes to putty in his arms, damn him and his rugged masculinity” (p.170). While this is an absolute stinker of a line, and the writing not infrequently flirts with cliché, for the most part Drayden manages to avoid inadvertent eye rolls from the reader. Much of this is down to the obvious sincerity of the narration; it's not interested in playing wider games with irony or metatextual commentary, simply in being an exciting story well told. Simple, of course, is not the same as easy.

Much of the most convincing narration comes as Drayden (re)tells her world's creation myth. As far as I can make out, she's built this from scratch, and it certainly ticks all the necessary boxes: epic imagery; elision of the superlative and mundane; supernatural folly, hope, and redemption:

Each time I nearly died but was saved in the nick of time by a dolphin, then a rat, then a serpent, then an eagle. After six thousand years, I had six thousand children, each and every one with the power of gods. Those descended from the eagle could fly, and those from the peacock had beauty that made the others weep … I took pity on my crab children. They became my favorites, and I granted them each the power to bend others to their will. (pp. 93-4)

The language for these sections is more suitably portentous, but the generally chatty tone still creeps through (“in the nick of time” ) and is one of a number of things which in sum mean that The Prey of Gods feels a lot like YA. It's written in the present tense (though I recognize that thinking of this as “stereotypically YA” might be a personal foible), while the two characters with whom we spend the most time (Muzi and Nomvula) are respectively a teenager and a child forced to accept responsibilities beyond their years. All of the main characters have one (and only one) Big Secret which they hide before obtaining a more mature perspective and learning to accept who they really are, and thus every character arc is effectively a coming of age story—even that of the fully-grown politician with aspirations for the premiership, who must throw off the yoke of their controlling mother's expectations and be proud of their true self.

Feeling like YA is neither a positive nor a negative for any book, necessarily, but the deployment of some of its core tropes here is often quite unsubtle. Of course all stories, and genre stories especially, utilize tropes to some degree, but The Prey of Gods relies on them to do a noticeable amount of heavy lifting. It's perhaps no coincidence that I found the creation myth sections among the more successful, in that stories of this type are our oldest, tropiest of all. Creating one “from scratch” is in truth nigh on impossible, but their universality gives the writer license to openly rework clichés and well-worn patterns—license that doesn't extend so clearly to the rest of the book, where the borrowings are less narratively justified.

As a whole the book is diverting, entertaining, and somewhat rough around the edges. This roughness manifests in a few ways beyond the reliance on tropes, most obviously the short chapter length (there are fifty-nine spread across the book's 380 pages). This trick is often used with the aim of keeping the pace high and the pages turning, but its effect here was the opposite, chopping up the overarching plotline and slowing its development. As the close third-person narration is constantly rotating perspectives, we're with each character so briefly before jumping to another that it takes most of the book for any of them to establish themselves as individuals, and thus people with journeys worth caring about. This in turn is exacerbated by the authorial voice, whose easy charm beguiles but also undercuts the severity of what should be some devastating early plot points, and, more pertinently, doesn't vary much according to which of the characters' heads we're in. Sydney as an antagonist also doesn't really convince until the final act (and even then …), which likewise means the story takes a long time to gain momentum. A jump cut every six pages means there's a lot of hanging off not so much cliff—it's more of a staircase, and when the climb is so incremental the fall is much less perilous.

I've fretted more than usual about the balance of this review, because my overall memory of reading The Prey of Gods is that it was enjoyable if familiar fun, yet, as I revisit my notes one by one, I find that most of them are fairly critical. There's a lot to like about the book not least because there's a lot in general; one of its defining features is its eagerness to DO ALL THE THINGS and this cuts both ways. On the one hand, with so much happening there's almost bound to be something for almost every reader to latch on to. A slightly unexpected example was the way rugby cropped up in Muzi's storyline. I played a lot of this at school as well, and while I did wince at a couple of misfires (I can't imagine even the most empathetic of players having a five-minute conversation in the middle of a match to apologise for accidentally hitting a spectator with a ball), the intense camaraderie you feel as a member of a sports team at that age is very convincingly captured. Likewise, despite Riya's unpromising early characterization as Difficult Pop Princess With Sympathetically Tragic Backstory, she eventually emerges as an interesting and engaging character in her own right.

On the other hand, the scattergun approach means you're going to have to accept a number of misses to go with the hits. Rugby etiquette is a comparatively trivial example, and I'm unfortunately unable to speak with similar personal authority to the book's success with the far more consequential issues of LGBT representation. The alphies, however, fulfil the traditional role of robots in SF as a servile underclass on the verge of rebellion. To say that this has added resonance in a near-future South Africa would be an understatement, and yet the implications of this aren't addressed in any meaningful way beyond a general sense that oppression is bad and freedom is good. While the sheer vim of the book's overall execution is an inarguable positive, it would have been no bad thing to sacrifice some of its breadth for greater depth, regarding both theme and character. I've read entire novels successfully built around less than is suggested here of each of the main POV characters, but as Drayden presents them they struggle to rise above their single notes—and there isn't quite enough control to consistently maintain the harmony.

It's not quite tomcats in a blender, but I think ultimately this book, more than most, will stand or fall on whether the reader gets on with its voice, whether they find the overall tone sufficiently melodic to carry the ragged polyphony of characters and plot. For my own part, if not everything about The Prey of Gods worked, then the balance was clearly in the positive. Given the explosion of ideas in her debut novel, Nicky Drayden seems unlikely to run out of things to write about any time soon, which I can only regard as a good thing.

Like Loading...
© Copyright 2017 By: K. Kamo
About K. Kamo
K. Kamo has master's degrees in globalization and applied linguistics and teaches in Japan, facts that are more related in theory than in practice. He blogs at this is how she fight start and occasionally tweets. He also regrets not choosing a less abstruse pseudonym.
One comment on “The Prey of Gods by Nicky Drayden”

Okay. I'm sold. About to cop this book right quick!