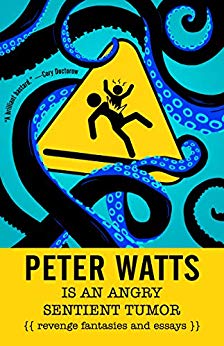 Peter Watts is an Angry Sentient Tumor: Revenge Fantasies and Essays explores a variety of topics, from science and truth to resistance and privacy. Collected from his blog, The ‘Crawl, and other sources, these essays often take the form of rants, but they’re endearing and engaging ones. Watts, a former marine biologist and Hugo Award-winning Canadian science fiction writer, rails against climate change one moment and movingly describes his relationship with a cat the next. You never know where his writing’s going to lead, and reading his essays is an exciting, energizing, and occasionally bewildering journey.

The collection’s first essay, “In Love with the Moment: Scared Shitless of the Future,” lays out one of Watts’s core philosophies. He is, in short, both an optimist who knows better and a pessimist who wants to maintain some kind of hope. He’s in love with the moment and scared shitless of the future, he says,

Because the Moment is so very precious. Because the apocalypse shredding the planet hasn’t touched me yet. Oh, I see it coming, so much faster than anyone expected. When it comes to climate change the optimists have always been wrong, and the pessimists have always been too optimistic. Even in my own backyard the changes are obvious. But the costs—displacement, starvation, loss of home and livelihood, death by disease or violence or straight-up hyperthermia—so far, those have always been borne by someone else. On a purely selfish level, I’m happier than I’ve ever been in my life, happier than I deserve. (pp. 11-12)

This passage, vacillating as it does between hope and despair, captures the spirit of this volume. Watts is a scientist and a realist, and yet he’s always on the lookout for small good things that he might pull from the vast, stinking sewage pit being created by the human race. If nothing else, he has a dark sense of humor about the many pending apocalypses that hang over us—mostly because he’s hopeful that these apocalypses will ultimately do away with our wretched species.

He’s a cantankerous part of humanity—mixed-up, violent, and befuddled as it is—and as such he always attempts to find small bits and pieces of joy, or love, or at least something other than the ever-present unfolding of ecological, sociological, and epidemiological disasters. In “The Life Sausage,” for instance, he describes the life and death of his cat, Banana. No one would accuse Watts of being sentimental, but this essay, nonetheless, is raw and emotional. It’s a love story. As Watts says, “we were two grumpy mammals against the world” (p. 112). Banana, in short, understood something of the compassion and empathy that lie beneath Watts’s gruff exterior. Banana had a host of health problems and cost Watts and his wife, the fantasy author Caitlin Sweet, a small fortune in vet bills, but the cat’s life mattered deeply to a man who’s constantly struggling with questions about whether humans should live on this planet at all:

When I worked, he was curled up on my desk. He padded at my side when I went for the mail. He was an omnipresent obstacle that Caitlin and I had to maneuver around during sex, whether in the bedroom or the kitchen or bent over the treadmill; somehow he was always in the way, furry and unflappable.

The love that Watts describes in this essay is fraught with peril, as all love is. Ultimately, it had to end—in this case, with death—and this essay is, like many of the essays in this volume, about mortality, loss, and grief in the face of horrific personal and planetary realities. And yet, it’s also about the fragile hope that might be found in memory, in storytelling, and in art.

In some essays, Watts wrestles directly with optimism. He wants to be an optimist, in short, but he can’t seem to find his way there. As he says in “A Ray of Sunshine,” “I’m going to try some optimism on for size. I think it might be tight around the middle” (p. 131). He argues that, in fact, he is an optimist in his fiction. In answer to critics who call him a nihilist, he says,

But my characters try to do the right thing! It’s not their fault they’re stuck in such a hellish future, that they have to kill a thousand people to save a million; that’s the future we’re building for them right now. If I ignored that fact I’d be writing wish-fulfilment fantasy instead of SF! (p. 131).

He does admit that as a nonfiction writer and human on the planet, he’s sometimes less optimistic: “Here in the real world, we’re pretty much fucked” (p. 132). And yet he points out in this essay the ways that people are trying to make things better, trying to reverse the damage our species has done and continues to do at an alarming rate. He points, for instance, to Pacific island nations taking developed nations to court over their oversized role in producing greenhouse gasses, or the Pope releasing an encyclical calling Catholics to fight climate change. It’s not like Watts goes very far down the road of optimism, to be sure. As he says:

Lest you think I’m going soft, I hasten to add: I’m only trying these optimistic pants on for size. I haven’t bought them yet. Big Carbon’s fighting back; in some US states they’re penalizing people who go solar by charging them extra fees for “infrastructure use.” Solar’s ascendance might perversely provoke a massive short-term increase in the burning of fossil fuels, as oil-rich interests work furiously to dig all that petro out of the ground now, before it stops being profitable. (pp. 133-134)

And yet, underneath it all, Watts seems to maintain some small hope that all is not lost:

What has changed is that finally there are a few shreds of good news amongst all the bad. Where once there was nothing but a sea of untreated sewage spreading to the horizon, now a few green sprouts poke up here and there amongst all the fecal matter. It’s not much, but it’s more than there was. And it’s for the better.

In a collection that explores the multifarious ways that as a species we’re destined to die a miserable death in a hell of our own making on an extravagantly ruined planet, this one stands out for its small glimpses of what might save us: ingenuity, creativity, and perhaps some measure of grit.

In “The Overweening Overentitlement of the Happy-Enders,” Watts takes unthinking optimists to task, arguing instead for a hard-headed, realistic kind of hope. He says in this essay that we need to find solutions for our problems, but he has this warning:

Let’s not, however, talk about them the way the Hope Police would have it. Let us not fall into that trap. You know the one: it still lies waiting at your feet, even after the half-dozen apocalyptic climate reports that have landed on the doorstep over the last several months. (p. 285)

The Hope Police, he argues, offer only easy, palatable solutions. Watts, however, offers harder ones, like this suggestion: “Stop breeding. Every child you squeeze out is a Godzilla-sized carbon bootprint stretching into the future—and after all, isn’t 7.6 billion of us enough?” (p. 286) He also says that humans need to stop consuming so much, even though, he admits, “we are not wired for restraint; let us off the leash, and we will devour whatever is available” (p. 288). The solution he suggests, therefore, is that we might need to stop being so human:

The problem is Human Nature, and the only technology that can fix that is genetic. If we can figure out some way to rewire Human Nature, right down in the brain stem, we might yet have a chance.

There you go. Yet another solution for the Happy Enders, if they’re serious about wanting them.

Perhaps we can save Human civilization if we stop being Human. (p. 288)

Watts, at this moment, expresses an idea that’s threaded through many of these essays: what’s wrong with us is us, and we need to find a way to make ourselves better, less selfish, more aware, and smarter. If we don’t, these essays variously suggest, hint, and shout, we’re doomed. And in that near-certain apocalypse in the not-so-distant future, we won’t just lose the worst of humanity. We’ll also lose the way we sometimes, against all odds, love stray cats, the planet, and each other.

Like Loading...
© Copyright 2019 By: Vivian Wagner
About Vivian Wagner
Vivian Wagner lives in New Concord, Ohio, where she’s an associate professor of English at Muskingum University. She’s written reviews for NewPages, Brevity, Pedestal Magazine, and The Georgia Review, and her work has appeared in The Atlantic, Narratively, Slice Magazine, and other publications. She’s the author of a memoir, Fiddle: One Woman, Four Strings, and 8,000 Miles of Music, and several poetry collections: The Village, Curiosities, and Raising.
One comment on “Peter Watts Is An Angry Sentient Tumour by Peter Watts”
PETER WATTS IS AN ANGRY SENTIENT TUMOR is an exciting and energizing journey - Tachyon Publications

[…] at STRANGE HORIZONS, Vivian Wagner in a lengthy review praises PETER WATTS IS AN ANGRY SENTIENT […]