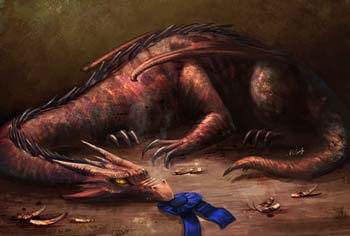 Grandpa had won Tastiest Ribs at the BBQ Showdown for fifteen years running, and I wasn't about to let him down now.

"You think you got the rub right?" I asked.

"If you didn't think it was perfect last night, you should've complained before we left them to cure. Too late now." She slapped another rack down. "You're just nervous. Go get Sparky. Make sure she's ready."

Sparky had always liked me better. I wiped my palms on my jeans and headed for the truck. I opened her cage. "Hey, girl. You ready to shine?"

She stared back at me with yellow, slow-blinking reptilian eyes. She'd been in the family for over three hundred years. Hopefully she'd be winning barbeque contests for three hundred more.

"Don't suppose you can tell me which wood chips to feed you when?"

She cocked her head, then nuzzled my hand for a snack. I slipped her some applewood. She munched contentedly. Soon, sweet smoke rose from her nostrils.

I rubbed Sparky under her chin. She purred, thrumming against my fingers. It was soothing. Calming. "You miss him too, don't you?"

It was still hard to believe he was gone. Grandpa had taught me the three most important things about being a man—learn to say thank you, learn to say you're sorry, and never underseason a perfectly good cut of meat. "I don't think I'll ever stop missing him."

An unfamiliar voice startled me. "Are you really going to use that antique?"

I looked up. A woman and two fellows walked toward me—all sun-bleached hair and bronze tans. They looked like they belonged on a beach selling fish tacos and salad.

I scooped up Sparky and draped her across my neck. "You are?"

"Emily Slate of the Slate Smoking Company. We're new this year. I thought we'd have stiffer competition. Smoking with a dragon leads to heat fluctuations and dry meat."

"Only if you don't know what you're doing." Which in truth, I didn't. "Dragon-smoked barbeque puts everything else to shame. You fixing on using propane?"

"Our trademarked charcoal briquettes burn at a constant, low temperature. Add our specialty blend of oak and pecan wood chips, and you have foolproof, perfect smoke every time.” She smiled, her teeth bright white and perfectly spaced. "Want me to bring you a bag?”

I huffed past them to our smoker and slipped Sparky inside. What to start with? Biting into Grandpa's barbequed ribs always made people feel like they were sitting on the back porch of their childhood. He didn't just make food; he made memories in your mouth.

Our porch had maple trees shading it. I didn't know if it was right or wrong, but I tossed some of those to Sparky. An hour later, I fed her hickory slivers—they were just the color of Grandpa's calloused hands. Then fragrant mesquite, because Grandpa said it was his favorite. You just couldn't use too much. After that, I gave her cherry, because Grandpa's cutting board was cherry. How many racks of gleaming, perfect ribs had he chopped up on that thing?

I ended with a bit more maple. Grandpa used to sit under those maple trees while my sister and I tossed their seeds in the air. All three of us would watch them helicopter and twirl back to the ground.

We took our finished ribs to the judges' table. They tried a dozen other entries before reaching Emily Slate's.

"Technically perfect. Superb bark. So juicy," they all cooed.

My gut sank. Emily winked patronizingly at me.

The judges dug into my ribs last. Whenever Grandpa had fed them, their faces got all nostalgic and dreamy as the flavors whisked them back to their childhoods. But today, they teared up.

One of them handed me a rib. "Just taste it."

I did. Sweet, magical smoke twined through the cumin and the sugar and the salt. I didn't see the porch shaded by maple trees. For a just a moment, I saw Grandpa standing in front of me. Grandpa, smiling and proud.

When my eyes cleared, there was a judge in front of me, handing me the blue ribbon.