Fiction
Size / / /
How Pleasant the Red Bloom
By: Lucy Harlow
Art by: Caroline Dougherty
1519 words
Listen to the podcast 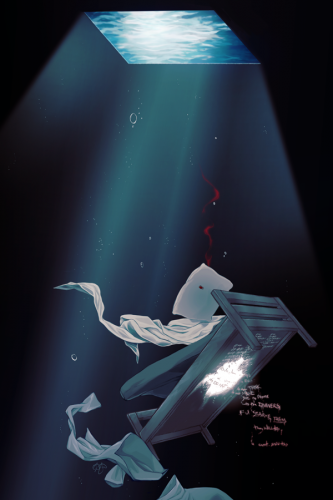 And where I Language want, my Signs

The Bird upon the Bough divines

donot THINK, do not MOVE.give no power to

Well met! I trust you experienced a pleasant ! [trial impliesJUSTICE.it wasnt trial.<Ciphers are THINGS they are READ they do not READ>] I know I did. Mine finished only this morning: I did so enjoy the springtime weather as I travelled to quite the grandest court within which I have ever had the great good fortune to find myself. To have so many [advoCAtes of MURder.ing Diviners] debating the suitability of my subsequent accommodations [a PIT,a wEll, a DiVINer's teacup] was nothing short of hum[ILIAT]ing.

I can only assume that you, dear inmate, like me, are a Cipher afflicted with the Disease! [SACRED forwhom?the diVINERS/not u] I wonder what you did to be denied the leniency of being euthanised! [exoRCis.m. NOT.merciful but fas.tr getit if U stlcan] The [selfserving] [COWARD] who spoke in my defence [sold.mefor prophecy] grew rather subdued when it became clear that the prosecutors would be permitted to take me into custody. I wonder, subsequent inmate, if your [SPINELESS] advocate requested death rather than your current situation? [stay USEFL..&hav plausible DIVINATORYfits..if uDON’T theyl do whatevr..they havto 2MAKE u] But certainly you are learning, as I have, that your new quarters are sparse but well-appointed, with ample opportunities for amusement.

The bed, in particular, is : [shutup shutup] no loose springs or sharp wires to speak of, for it is but a simple wooden slab with a soft—for an old sack, that is!—blanket to keep off the inevitable chill. However, it is my preference to lie here on the floor beneath said slab, a preference you have evidently—given that you have found these little scratchings of mine!—come to share.[<just stay there, do not read any more, and hold still, hold still>] The cell has no ceiling, as you will have noted, and even if the late summer weather were predominantly dry ( I suspect that the distant patch of sky just visible from down here would induce a simply dreadful vertigo.[DONTGOup..ther. the DIVINERS watch]

I hope you, subsequent inmate, feel proud of your contribution to society, as do I! Live Ciphers are [yet they BLOT OUT soMAny] to the Diviners. Those things that made us [<please do not believe it you were you must have been made to be loved>] to the world are as language itself to those elevated beings! Is it not wondrous? I wonder when they will send for me, to read my seizures and to prophesy.[theyr alrEadY watching.you'll NEVER leave]

[what did you know of TIME then?!now that I know ETERNITY!] has passed since I wrote the above! I did so enjoy the cheery bright lighting when I first moved here, but as the months go by one does struggle to get much sleep! I think it would be quite pleasant if they kept the light at a constant level, don’t you? But the persistent alteration [they won’t.doit iF u make yrself fit without th LigHT.betR to fakeit] in brightness is rather distracting! In part, that accounts for the modest pace at which I compose this little note. Dear inmate, dear , [<they read you without consent; provide no signs.>] do you ail like me? You must be afflicted with at least one of the Diseases! I have not. I have never once left my present accommodation. The fits— [not eVen the fits are reAlly.mine] constant companions!—do have the benefit of adding variation to one’s hours, but I must advise that you injur the tongue.[<you fool you fool, you poor dear fool. your body speaks even without a tongue.>]

! [<only I, only I>] I wrote the last some three months back, and was forced to stop due to a dearth of suitable tools. However, earlier today, on this beautiful Spring morning—I assume it is Spring, if only because a pretty white blossom chanced to fall all the way down from the sky and onto the ground beside my head!—I had the presence of mind to remove one of my teeth. A wondrously good one—a canine, gloriously sharp! [keep URteeth:] This has the double benefit of helping to preserve the integrity of my tongue during my fits, [&bite OUT ur tongue<it is too late>] and of carving the underside of the bed most effectively. [&write nothing nothing nothing] I think I will sleep now. How pleasant the red bloom beside my head![& bleed.]

Please forgive, dearly subsequent one, the sudden change in the orientation of this little note. , and as I have now filled up half of the underside of the bed I find I cannot continue to scratch this message without my feet sticking out from beneath its shelter. My additional sacks are drenched through and if only for sentimental reasons I would like to preserve as many of my remaining toes as possible! So I have rotated from my previous position, a manoeuvre which took several [PAIN all alike no season knows nor clime] to complete!

Most subsequent of inmates, most eloquent of , [diviner vs cipher = tyranny] I recall, some back, saying something to you about Please excuse my absence as I take a little time to reread this note—just to check for spelling errors, infelicities of tone and style, that sort of thing, you understand!—before I plan my escape—

I have moments, subsequent inmate, when I suspect that time does not run the same down here. What I have written, I have written. & what I have written, I have need to unWRitE. But my every moment is being read. Not what I write, you understand. But they must be watching me from somewhere. This cell—ah, it seems ungrateful to call it such!—is like an enormous teaCUp, and I am the leaves at the bottom, but I cannot see the Divining -I-. I wonder what intelligence of the future the drEgs of mE have provided them! And I wonder if I could ever seize control of the semaNTiCs of my own body!

and I am crowned

Subsequent inmate, I am dethroned. Do I prophesy? I have returned to where I began.[<hello again, my dear, my poor dear, my self>] I have seen the Diviners face to unholy face and I made them tremble. But..bUT.. I was, am, wEak, and I am returned to the drained teacup.

No more. No morE. I have thought. I have read and reread and redrafted and correCTEd. I have a hundred hUNDred times and more been your beloved subsequent inmate. I do it so much that I have doubts of my ever coming here, subsequent inmate, truly other! You will only be me, again and again, warned ever more fervently, because I knOw now tHat I can only warn you—

SILENCE, the self-destroying word: would that I could render all my words such as that! When my reluctantly eloquent body perishes I will take my tealeaf soul back and become every disease of throat and ear, every bo

okworm, every spark that burns a library, every merciful knife that ever cut out a tongue.

Not another word, my sweet, not another. Come out into the dark, my friend, my wailing child. True without truth, borderless voice. In our beginning is our end. And silence, silence, silence.

I will obliterate these scratchings, if I am able. I must sleep soundly tonight.