Fiction
Size / / /
Tamales in Space, and Other Phrases For the Beginning Speaker
By: Gabriela Santiago
Art by: Kali Gregan
2351 words
Listen to the podcast 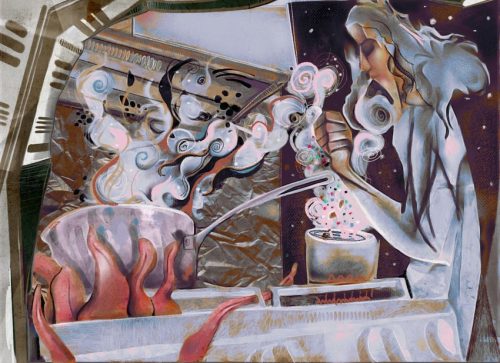 The lenguas don’t go into her shop unless they have to; it’s too loud there. A riot of cinnamon, splashed with lavender, bursts of olive oil and bacon fat, lemon cutting across almond and chiles anchos and dates stewed with ginger—and all of it against the background of burning sugar. Imagine walking through a word salad, disembodied voices screeching stray tense markers while others whisper gerunds and datives, and occasionally croon an eerie accidental sentence.

The station’s supposed to have total air control, in case of fire. She’s in the eighth ring from the Spindle, though. She’s been on maintenance’s list for five years.

Carmela still has some customers.

Cream of tartar cut with almond extract and eucalyptus essential oil, then chocolate salt in lemon/lime, blending into crushed candy canes with red pepper flakes and strips of cinnamon bark. A layer of baker’s chocolate with cumin and vanilla, a layer of nutmeg and galangal. Chewy pink bubblegum center.

What she is trying to say: Once upon a time there was a girl in Pilsen whose family in Mexico City owned a candy empire. The factory was a giant metal forest for her to play in every winter. She dreams sometimes of the clanging of the machines.

What she says: Infant (female) in a nest of a silver leaves. Loudly, loudly! The thunder. A general sense of fish.

“Can’t you go fuck with Tropics sometime, Carmela? Some banana leaves; bet your girl would love that.”

“Venessa wants a taste of Ponce, she can work her ass off running around the station.”

“You know how the uppers get about Temperates. Especially corn.”

“Just the husks. They set your reclamation schedule off for months, you said.”

“We’re working on a new microbe—”

“For the past three years.”

“I’ll let you know. You’ll get your six extra.”

“Make it eight this year.”

Old Tatters is her most loyal customer. Old Tatters isn’t her name. Carmela would have to increase her taste buds by a factor of ten to hear that name. She’d need two more tongues and twelve different salivary glands to say it.

She pays Venessa so she doesn’t have to.

The lengua lopes around the corner, her ancillary tongue thudding against the deckplate. The vibration rouses Venessa from her romance novel. Her hands fly into the air; Old Tatters follows with the ancillary and her forefronds.

Carmela’s never had the knack for the pidgin, but she catches a couple words. “Just take the order. I’m not paying you for literary criticism.”

Venessa rolls her eyes and turns off her hearing aid.

What she is trying to say: Once upon a time there was a death in the family. The empire was broken into pieces like a pane of glass. She could have saved some of it, but she took cash instead, and a ticket, and she tried to never look back but she never stopped.

The sign above the shop says “Cockayne.” It’s possible Carmela would have more customers if she didn’t make jokes that were eight centuries old.

The front of the shop is the counter. Venessa sits on half of it. The other half is hard candy, the kind Carmela can bang out of a cookie sheet with a hammer. Humans buy it, keep her in light and heat and tithes to the Spindle.

In the back is her cot, the stoves, the mixers, the extruder. All of it Frankensteined from memories and others’ failures: the broken tiller, pill compressor, corn masher.

Next to her cot: the racks of spices like a library shelf, stories she could tell.

What she is trying to say: Why do you keep coming back here? What are you waiting for me to say? Haven’t I proven yet that I don’t understand you?

What she says: Walls.

“I don’t know what kind of bullshit tamales you made in Minneapolis, but I don’t need canned corn.”

“Car, you know I don’t have masa harina.”

“Little birdie told me it moved up on the list.”

“Another little birdie caught the kid you paid to move it up the list.”

“Look, the best I can do for you is corn chips. Some idiot added a zero on the last order and they’re going stale in holding. You grind them up, who’s going to know the difference?”

“You will when you get your three.”

The lenguas who jetted up early enough got jobs on the hull, credits enough to get stuff sent from planetside. She’s seen the globes get unwrapped in Post, saliva-slick. The scents seep through air filtration like a song and lenguas shudder to a stop, transfixed.

Those that came next can afford to go to an Agra subsection: top-of-the-line equipment, linguists, food scientists straight from the Natick Center who know taste on a molecular level. Prose stilted but serviceable.

But the lenguas who arrived last—when they get hungry for written words, they have to go to Cockayne.

“Let me guess, Livestock threw you out?”

“Whatever. You got the shortening.”

“Despite your crushing attempted betrayal? Yeah. And the tofu.”

Tamaladas this time of year are a tradition.

And so what if the tradition is unmoored from the sun whose gravity determined the day, so what if calendars are artifacts too heavy for the freight costs, so what if the corn grows in a microbiome whose DNA is ever-shifting in a delicate shuffle over the light years until one day it will eye its ancestors uneasily like strangers across a dance hall?

Under the light of the lenguas’ sun, these things become only more important.

she said she liked the part where the seasons end and the herd comes together to eat the stories of the year that was sort of close to what you were going for wasn’t it?

p.s. also can we please have rice with guisantes for supper tomas in grain processing said he could get us a deal

“You would not even believe where I found it, I left it right in its usual place and I told Vikram, I told him, now I know you didn’t use it on your egg powder again! And Vikram swore, he swore up and down that he didn’t use it on his egg powder, so I emptied out all my cupboards—you should have seen it, we couldn’t even move in our bunk, we looked like that lengua art installation they sent up from planetside and what a waste of freight that was—and you’ll never believe it, I found the cumin in with Amala’s paints! What an artwork that would have been!”

The lenguas sleep in the hallways; every few weeks Ops clears them out, citing fire hazards. They always lope back, curling around corners, piling on top of each other like discarded rugs. Supposedly it’s the closest they can get to the colonies they have planetside, carved into the cliffs by the sea.

Carmela walks the halls at night sometimes. Lenguas speak in their sleep, clouds of cinnamon cut with damp stone, air taking on currents of sun-kissed clover and eddies of waxy chocolate. At night, you can walk through their dreams.

At night, you can almost understand.

i mean that is good right i never know because

anyway we’re all set for tomorrow

“Watch it! If I lose any one of these babies—”

“What, you haven’t engineered stingless ones yet?”

“Sure we have. And the honey tastes like it came out of a diesel tank. Hold the smoker closer.”

“This going to set me on fire?”

“It’s all hormones these days. Twice as fast, see? And we just lift out the comb—”

“Take two. You’re going to need all the help you can get with the shit tofu Temperate’s putting out this year.”

“Don’t get me started on their garlic.”

The back of the shop is boiling. Barely enough room for Carmela and Venessa at the best of times, and now ten people are spilling out to the front, the six they can squeeze in the back bent-kneed around a low table trying to spread masa on cornhusks with compostable spoons; it always crumbles off and every five minutes someone snaps their spoon’s stem. Six sweaty humans, hearts pumping and lungs breathing out CO2 and station gossip, mouths dripping at the scent of the steamer on the far right hot plate, eyes on the ticking timer that says when the first batch can be pulled out and pulled apart in bite-size pieces to drag through the shelf-stable applesauce snagged from holding, or bagged up and taken back to quarters to put in the deep freeze and be rewarmed when it all gets to be too much—all those stars you can’t count out the station window—and you need the taste of something far from cold.

Carmela’s in the thick of it, the one day when she’s indisputably in charge: directing the washing here, the grinding there, the spreading in of the makeshift masa, the ballet of the pots over the hot plates as the soy cubes trade places with the finished husks in the steamer, fanning away the smoke before it sets off the atmosphere alarms, gingerly tipping just enough of the yellow cap Goya Seasoning so that there’s still a few grains left for the next year.

She won’t really have left home until the last of it is gone.

“Okay, who the fuck made this sorry mess—” she starts to say, holding up a corn husk even more lopsided than the rest of them, when she realizes she is not striking fear into their hearts the way she wants to, because they are distracted.

Someone is banging on the front door.

Her heart jumps, sure it’s Security or Station Maintenance about to change air filters at the exactly the wrong time, but she’s not even halfway there before she sees the look of recognition in Venessa’s eyes and knows exactly who she’ll see.

“Tell her to clear out,” she says to Venessa. “I didn’t make any stories for her.”

Venessa’s hands fly into the pidgin, but Old Tatters just keeps pushing on the door, the plastic starting to squeak. Her forefronds splay outwards and retract again and again. Venessa sighs. “Her eyesight’s getting bad, she can’t see. She says she wants to read—no, meet—”

Old Tatters’ left forefrond finds the handle and the door swings open; the guests cry out, jerk to their feet, someone’s shoe snagging the tablecloth, corn husks scattering like pages. Venessa and Carmela both spring forward, but Old Tatters insinuates herself between their bodies like a sentence, winds her way past them towards the hot plate. She flips the lid off the pan and her three tongues scoop out all the steaming tamales and slip them down her third throat, husks and all.

Then she is perfectly still.

Carmela stares at her, the only sound the harsh breathing of all the humans in the room, and she feels in this moment more than ever the inadequacy of language: it is all a gulf, a lack like a wound. Her inelegant English, snatches of Spanish, nonexistent Náhuatl de la Sierra. The pidgin like a visual radio that cuts in and out of her understanding.

Old Tatters’ fronds raise, then lower, swirl. There is a growing scent of lemongrass, and Carmela cannot remember what it signifies, satisfaction or recognition—

She came here to tell stories, and she does not even know what words are.

The lengua—they don’t nod, they don’t. But it is like a nod.

Then she turns and leaves, as swiftly as she came.

Venessa’s eyes are bright. Venessa is not crying. Venessa has not cried in all the time Carmela has known her.

“What did she say?” Carmela asks.

And Venessa is smiling. Venessa smiles maybe four times a year, when she thinks no one is looking. She speaks, that lovely, lightly blurred voice: