Fiction
Size / / /
This Is How
By: Marie Brennan
Art by: Qistina Khalidah
1961 words
Listen to the podcast 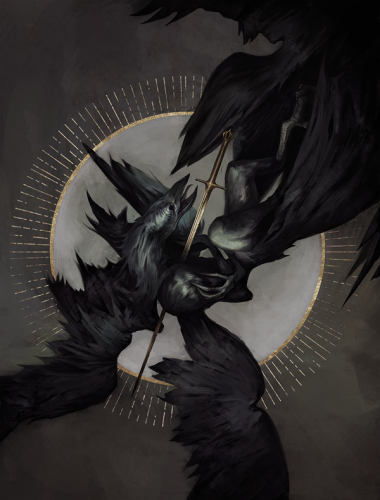 This is how a valravn is made:

A child dies. Lost in the woods, he curls up at the base of an ancient oak, and never rises again. Or she falters in the snow, lying down for a moment by the side of the road, just a moment to rest her eyes. Or, starving and alone, he weeps for someone to help him—but no one does.

A raven comes. Pecking, tearing, red blood on a black beak. Not eyes, as some tales would have it, but the cold red blood of the child’s heart, chilled and stopped by death.

A child falls. A raven feeds. A valravn flies away.

This is how a valravn dies:

A noble warrior faces the ravenous foe. Bright steel against dark, bright armor against dark, and if he is quick enough and strong enough, he cuts the creature down. Where once a malevolent raven knight stood, there lies now the body of a bird, wings spread wide and still.

Or a woman catches a black-winged bird and pierces its breast with a pin of purest gold. The beak that once feasted on a child’s corpse opens in a silent cry; the heart that beat with a child’s blood stutters once and stops.

Or in a frozen wood a man kneels before the raven knight. He neither pleads for his life, nor fights to end the one that threatens his. A flash of shadow, a spatter of blood across the snow, and the man falls.

It will be a long time before the valravn realizes that he too died that day.

This is how a valravn weakens:

In small ways at first. Blood tastes less sweet; pleas for mercy ring slightly out of tune. When he takes human form his skin itches, as if something is crawling beneath it. When he takes raven form it feels wrong.

A valravn does not sleep. But when he sits alone, as human knight or scavenger bird, watching the stars and the moon and the blood-stained sunset, his mind is disturbed. The silence within is filled with murmurs he cannot quite make out. A valravn is not a person, to be troubled by hopes or fears or memories of the past. Yet he remembers: first in flashes, then in long, uneasy reveries, from which he wakes with the sense that someone was speaking to him. But he cannot remember what the voice said.

In place of the valravn, there is a creature that has begun to feel.

This is how a valravn falters:

He lets someone go.

A child. A girl, running along a path between two fields, hurrying home before night falls. The raven knight lands before her, a winged black shape plummeting into a tall figure of black steel, and she drops the bundle of firewood she is carrying. She doesn’t shriek, this one, though her moon-wide eyes say she recognizes what he is. If she runs he will chase her, cut her down where she flees and drink her heart’s blood on the banks of the nearby stream. If she does not run, he will cut her down where she stands and drink her heart’s blood here between two fields.

Except he doesn’t. She stands there, shivering, and he raises his blade and he does not strike. They stand there until the sun sets and the stars come out, until the waning sickle of the moon rises as if to reap what the valravn will not. By the end of the night she is swaying and exhausted, and when she closes her eyes for a too-long blink he is gone, black feathers vanishing into the darkness before dawn.

She picks up her bundle with shaking hands and staggers the rest of the way home.

This is how a valravn fights:

With claws and beak, with a sword of dark steel, and with all the malice of his corrupted heart.

Claws and beak and sword are no use against the voice inside his head, the voice of the man he killed.

Not the first. Nor the last. But this one was different—was, and is. They all live on within the valravn, the spirits of those he’s slain; like a fox with her tails, they mark him as old and worthy of fear. No tail, though, has ever given a fox such trouble.

This one, he thinks, was a mistake.

I am sorry. The man’s final words, on his knees in the snow. Odd words, for someone about to die. But he said them with such sincerity.

That sincerity rings through the valravn’s hollow bones, an echo that will not let him rest. Sorrow has leached the savor from the blood of his prey. Compassion has formed an uncomfortable harmony with their pleas. Three words froze him on the path between the fields: I am sorry. As if he would apologize to the girl before he killed her.

Not his words. The words of the man he slew. A good man, filled with charity and mercy, temperance and kindness, who even in death refuses to be silent.

The solution is easy. Release that soul, and the valravn will be at peace once more.

But there is cruelty in the cold heart’s blood of a child who died lost and alone. It is the cruelty of nature twisted to her harshest face, and it is what transforms an ordinary raven to a raven of the slain. A cat may let her prey run for a time before she catches it again, but not a valravn. He keeps what he kills, and will not let the man’s soul go.

The next time he finds a child, he leaves the body in pieces, scattered across the daisies of the meadow.

This is how a valravn breaks:

In horror, in anguish, in grief.

He gathers up the scattered pieces from the stained carpet of daisies, as if he can stitch them back together again. But the force that transformed him gave him armor and a sword, not a needle and thread. He can kill, but he cannot heal.

He remembers gentle hands, cool water and a soft cloth to wipe the blood away. He remembers tearing a loaf of bread in two, and pressing one half into shaking, weakened hands; he remembers giving the other half away later, to a mother with an infant, and sleeping that night with his belly cold but his heart warm.

But he also remembers killing, again and again, without mercy. Many, many deaths, but not too many to count, because their souls live on within him. He relives those moments in pitiless detail, the good man’s soul grieving for each and every one.

What breaks him is the kindness, the compassion, the boundless heart that has room within it even for him. A creature born of death and abandonment, nature’s heartless acts, should be beyond mercy. That is not what a valravn is for.

I am sorry. The man knew what a valravn was, long before the black-armored knight stood before him. And when he met one, that man grieved for the child who had died, for the raven who had unwittingly drunk the cold heart’s blood. For what they had become.

That soul is there, too, buried beneath the rest.

The weight is too great for the valravn to bear. He curls up in his human form and screams; he cannot endure this shape, so much like the people he has killed. In raven form he huddles into himself, head beneath one wing, pecking desperately at his own breast as if his beak were a pin of gold. If there were a brave knight present he would spread his arms and welcome the shining blade.

There is no knight. There is only himself, and the soul of the good man, and all those the valravn has killed.

This is how a valravn changes:

One by one, he lets them go.

The souls drift upward like motes of light, but before that they tear free of him like his own bones coming out. Young and old, male and female, brave and angry and screaming in terror. They do not forgive him, even when he lets them go. They curse him as they depart. And the pain goes on and on, always more bones to rip out, more sins to remember. The snow around him turns red with blood, a stain becoming a carpet becoming a great frozen pool, stretching outward through the wood.

This is how a valravn fears:

Never once, in all his existence. From the moment he lifts his beak, gleaming with a child’s heart’s blood, fear never touches him. He sees it, feeds on it, relishes its delicate taste, but never lets it strike him.

Until now, when he hovers on the brink. Two paths lie before him, and both, he fears, lead to damnation.

Release the child, and die at last, completing the death that began when he slew the good man—but that man’s soul will die with him.

Or release the man, and return to what he was when he began, a dead child’s soul in the body of a raven—but the warmth within him will be gone.

And without that warmth, what is he but a valravn? A killer without mercy. A creature that knows no kindness. He may remember what he has done, but the spark that began it will have flickered out, and the ashes it leaves behind cannot burn. He will begin again, repeating all his sins of before, and the thought of that terrifies him.

Or a third path. Stay as he is. But the fire burns too hot for that; he wants to release the two souls that remain. He knows now what goodness is, and cannot reach that star while he holds two innocents trapped. Without them, though—without one or the other—

The good man is silent. He has wisdom, but no answers. There are no tales of a choice like this.

The child. The man. Neither.

This is how a valravn chooses:

He lets the good man go.

This is how a valravn is remade:

In mercy, in justice, in repentance.

The soul of the good man flies free, and there is no pain as it goes. The raven is left alone with the soul of the child who died alone—but not like it was before.

He looks at his hands in wonder, then touches one to his breast where a beak once pierced and tore. The skin there is soft and unmarked—and it is warm.

Take fire from fire, and fire remains behind. It will continue to burn as long as it has fuel: the desire to do good instead of ill, to make amends for the sins of the past. He has freed the souls he wronged, and the one that remains is no victim of his. What killed that child, what kills all such children, is something else.

Perhaps, he thinks, he can help change that.

The air rustles, and black wings spread. But this time, their feathers are tipped with gold.

A child rises. A raven repents. A goðraven flies away.