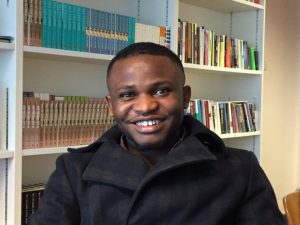 Uncle Odinaka was sitting at a white plastic seat under the shade of an udara tree near the trunk. He cupped his snuff on his right palm, and with his left, he tapped it to sniff. He would sneeze and some of the brownish droplets from it would spread on his white singlet. I called the color of the singlet white because I knew when it had been that color, when Mum bought it for him as a gift. What remained of it now was something yet to have a proper name of its own. Sometimes he would use the edge of the yellow wrapper that tied across his waist to cleanup his streaming nose.

Dad parked a stone's throw from the udara tree where Odinaka sat. As he turned the engine off, I knew what he would say.

"Don't eat anything from anybody except the ones I approve and don't shake hands with any of them." I never knew at what point this ritual began, but what I could recall was that since Ebuka, my eldest brother, died, Dad suspected that my mother's uncles killed him and would always give me this instruction if I travelled to my mother's home with him.

We walked towards Uncle Odinaka. When he saw us coming, he stood up and started coming towards us. I realized why Mum used him as an adage whenever she felt that we weren't eating as we ought to. "Do you want to be like a single 'I' like your Uncle Odinaka?" she would say. And truly, Odinaka looked like an 'I' with a flat stomach and bottom. He looked like a strong Sahara wind could blow him away.

From his gestures, I knew that he wanted to hug Dad as he did to Mum whenever I came with her, but Dad just smiled, standing away from him. Dad tucked his palms in the pockets of his white kaftan. Odinaka understood Dad's gesture, so he withdrew. But I went near him and hugged him just the way Mum used to do. I knew that if the eyes were a sword, Dad would have slain me. I tried as much as I could to avoid his eyes. It was then that I told Uncle Odinaka that I was tired and needed some rest. He gave me the key to his house. I thanked him. Without looking at my father, I left them still standing under the tree.

"The Eaters Of Flesh" from Lost Tales from the Mountain: Halloween Anthology Vol. II, edited by Abigail Kern & Riley Guyer, and reprinted in Haunted Grave and Other Stories

The real horror in Ezeiyoke Chukwunonso's story doesn't lie so much in that the young hero's family are involved in evil magic, but that he can't tell which parent it is—or possibly both and the wider family as well.

His mother has disappeared; his father says that religion had driven her to madness, but her family blame him. Did his uncles kill his brother? Or was it his own father sacrificing his first-born? The hero can never know. The story powerfully communicates what it's like to be in a dysfunctional family.

The story is published in a horror anthology, though I would call it a piece of traditional belief realism. The focus is not so much on the magic as the sense of paranoia and denunciation of each other by every part of the family—a nightmare of threat and doubt.

When I came out of the house, Dad was still under the udara tree. About fifteen other extended relatives sat with him in a circle. From where I stood in front of Odinaka's bungalow, I couldn't make out what the discussion was about. The way Nna, my mother's nephew, who looked like a scarecrow, was speaking and was swinging his right hand up and down and sometimes pointing an accusing finger at my father showed me that whatever it was, it wasn't funny. Toochi, Odinaka's younger brother, sitting on Nna's left, would sometimes shake his head. Odinaka sat on Nna's right, using his two palms intermittently to give Nna a gesture of calming down.

My eyes went back to the udara tree. Virtually everybody there was standing up. I think my father was in the middle because I couldn't see him. Whatever led to the present situation I couldn't tell but I was certain that if nothing was done, my father's safety was in danger. I walked over.

Immediately when they saw me, the commotion began to calm. Chidi, Ejike, Mmadu and Ude, the elderly older cousins of my mother began going to their seats.

"You have a week to provide our daughter or you will face our wrath," Nna said as I approached them.

Families are durable but inescapable, and if they go wrong they can be unbearable traps.

"If something goes wrong it may well be that witchcraft is blamed, which means someone gets blamed," says Ezeiyoke. The story nails that sense of spreading accusation; that sense that everyone is tainted, part of the problem.

In the end all the hero can do is flee the family, lose his name, lose his identity. Disappear like his mother? Move to Europe? In a sense the story can be read as a myth of the diaspora and loss of identity.

The story is effectively written in a style flavoured with Nigerian English. At one point the father says to the hero, "Since you were a child, I have watched you whenever I was in the car with you. You often look through the window and whenever you do, it means that you have an enormous thing under your skin."

The location of the story emerges simply and clearly. You know at once the narrator is African from the vocabulary and tone. The names, then, might tell you that the family is Igbo. References to Arsenal Football club might mean they live either in Nigeria or are diasporan in the UK, but this last question is finally dispelled.

I ask him if the characters are speaking Igbo in translation.

His story "The Last Man Standing" was longlisted for the Golden Baobab Award in 2010 but did not make the final cut for that anthology. It was published in Future Lovecraft edited by Silvia Moreno-Garcia and Paula R. Stiles. It's an end-of-the-world story about a mutated, highly contagious version of AIDS. Science fiction crosses with horror—people say a surviving 13-year-old girl is a witch. Someone retells a story of how a local native doctor conquered an evil woman who turned herself into a giant mosquito at night. Once again, accusations of witchcraft do as much harm as any disease.

He doesn't confine himself to SFF. He is currently at work on a mainstream novel about oil and the Niger delta. His published mainstream stories include "Spinoza's Monad" in the anthology Africa Roar, 2014 edited by Ivor Hartmann and "Asylum X" published in the Corner Club Press Quarterly Publication. Ezeiyoke's poetry was published in the 2010 ANA Review, an annual journal of the Association of Nigerian Authors. The poem "Woman" was shortlisted for the Ghana Poetry Prize in 2013, and "Oil of Blood" was shortlisted for the Quickfox Poetry Competition.

He was born 29 years ago in Enugu, Nigeria and came to UK to study 2013. His first degree was in Philosophy. He got an MA in Creative Writing from the University of Swansea and is now studying for a graduate diploma in law from BPP in Manchester.

"My favourite writers? I have a lot. Stephen King, Chimamanda Ngozi Adichie. I like the big bestselling authors. Dan Brown, the legal writer John Grisham, author of The Firm. Most often in Nigeria it is this big bestselling authors that are readily available and cheap to buy from roadside booksellers. And it is impossible not to read them since the money that will buy for me a single African writer, say from Farafina, would buy me at least three titles from these authors. And just like any reader, the more the books, the merrier life becomes.

"One of my earliest favourite authors was Cyprian Ekwensi. He was a realist author but was overshadowed by Wole Soyinka and Chinua Achebe. His novels are Burning Grass and Jagua Nana."

An appreciation of Cyprian Ekwensi appeared in the journal African Writing.

"As a boy I loved Chukwuemeka Ike. I really loved his novella The Bottled Leopard. It was about a boy who can turn into a leopard at night. I can't forget it. It sticks to my memory even now after 20 years ago."

"Amos Tutuola … because of the grammar he was a bit unlucky and was pushed into a ghetto of literature. People stand away from him. He has a good imagination and writes the kind of story I want to write.

"Wole Soyinka—I revere him but what he writes is so abstract sometimes I can't understand him, so I use him to measure how much I've learned how to read and when I do, I say, oh, how intelligent I have become." At this, Ezeiyoke roars with laughter.

Getting hold of books is still something of a problem in Enugu. "In Nigeria, Amazon is still accessible, but the exchange rate makes it a big amount. But with Farafina (publishers in Nigeria) it becomes cheaper. Most of my books come from Farafina.

"I came to the UK solely because of my writing. And I would say that my MA in Swansea University was magical. Before I came to the UK for my MA, I had only one professional publication, storywise, but now merely two years after my MA, I have at least published five short stories and a publisher has requested for the collection of my fantasy short stories."

Since the interview in May, the collection of stories has appeared, Haunted Grave and Other Stories from Parallel Universe Publications. It includes "Eaters of Flesh," "Last Man Standing," and two other stories previously published in anthologies.

How does he view African SFF?

"In African life, where I come from, there is not a strict line that divides fantasy from realistic, these two words are meshed.

"What African writers might bring to SFF? For me, I don't want any African writer to feel to be under any pressure that he needed to bring anything new to SFF apart from the story that matters to him, which he alone can tell.

"It is precisely this feeling of wanting to bring something unique and special that trapped African literature, stopping it from growing for a long time. African writers, in order to fulfil this need, ended up in writing stories that must have a social function to perform, say to fight colonialism, imperialism, and corruption or to educate. Most African literature ended up in becoming an anthropological-valued literature. For me, each individual should create without thinking of any constraint placed on him to invent in a particular theme or expectation from any community. It is after the birth of each story can we then be justif[ied] to begin to construct a canon to explain what is new the story has offered."