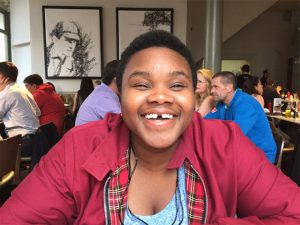 In a plain dark room there's a cage. On the outside there's a singular chair. OLIVER, bruised and battered, is in the cage, he paces back and forth with a slight limp. He speaks with an Eastern European accent.

Three weeks … that felt like an eternity. Bodies dangling on the edges of the earth begging for life. Endless nights of unwanted screams penetrating your abdomen becoming a sharp unbearable pain!

Oliver stands up and looks around, speaking to the other detainees.

Brethren, the blood that has been shed will not be in vain. We will sing a new song, dance a new dance; the smell of dead flesh will not deter us … the sight of discarded bones will not DETER us.

My friend will you shut up! Making so much noise, you're giving me a head ache.

USMAN, a Border Official walks into the room carrying a book and sits on the empty chair.

Keeping us here is illegal. I've been here for 1 week now … no lawyer..

When you came here, did you come with a lawyer?

It's my right to be given one …

See me see life! Did you think of my rights when you came into this country illegally

Instead I am forced to come here everyday and to hear people squealing like caged animals.

So, what is your name?

I already gave my name when they put me in here.

Yes but I'm asking you.

Where were you born Arnaud?

What are you talking about?

Your real name isn't Arnaud is it?

Usman pulls out an ID card.

A couple of days ago—a body washed up on shore, he'd been stabbed several times. We found this ID card on him.

Murderers and illegal immigrants are not allowed in the AU.

This year's Africa Writes festival ended with a performance of The Immigrant by Joy Gharoro-Akpojotor. Set at the turn of the twenty-second century, it creates a future in which European migrants are trying to get into the African Union.

Joy: "I applied for Arts Council funding to develop the idea. It came from how people perceive immigrants and asylum seekers. Originally it was 1,000 years in the future but when I got the money, the Council team said make it only one hundred years from now.

"It's about climate change. The winds change course. Iceland is changing from desert to a forest. The Sahara has started greening and people use solar panels for energy. The African Union becomes like the EU, a free trade area, but they don't want people coming in. They keep out foreign companies and the locals get first dibs. They have the African dream: sunshine, money, and equal distribution of income. There's lots of high-rises, and there still is poverty, but it's hidden.

"The play's about human psychology. People are still narrow minded. The West has decayed and people are seeking asylum in Africa. If you were a border guard in a detention center, knowing the history, how would you treat a British asylum seeker? It's about the idea of power; the guard has power at work.

"Usman and Oliver have different kinds of confrontation throughout the play, confrontations to make you feel uncomfortable, white or black. At the end I didn't know who I agreed with. Sometime I think, Oliver you are just the liberal dude, sometimes I'm thinking what he's saying is kind of true. The humanity has to come through. In saying things to Oliver, Usman hits buttons, trying to taunt him, but then realizes the refugees are human by the end.

"It's about the dream of what Oliver thinks Africa is. Usman is trying to say to him: you have bought into this dream without coming here, but you get here and find the whole idea of Africa Utopia, what is that? It's a real place, not paradise. People are hostile to Oliver, and he doesn't know why. When refugees come here they get treated like animals but they've left a hostile environment, and hope this is an opportunity for a better life."

Joy was born in Port Harcourt in the south and east of Nigeria—the Delta, an area of much unrest.

Joy: "It's still a dangerous place. They are pumping in more money, and have a book festival now. There are too many buildings now. It used to be like a garden.

"I grew up in Brunei for five years, then went to boarding school in Nigeria in Osun State. I came here at sixteen to study, and stayed for college.

"My mother would say that I was born a writer. I read loads of books. At eleven I wrote a story called 'The Vampire Busters' about busters and two people who go around being vampires.

"My favourite writer was Robert Goddard, who wrote Closed Circle. I loved Rebecca by Daphne du Maurier. I just like stories. Most of my influences are cinematic. I love French cinema. My favourite movies are Shoot the Piano Player and Jules et Jim. I also really loved Antonioni's Blow Up.

"I wanted to be a filmmaker so did film studies, which was more theory, I learned to understand film theory. Then I did a Masters in Creative Writing for Films and TV with City University.

"I made my own two shitty films. I found that I hated directing, so I helped a friend producing, and just kept on doing it. I found I loved producing. Producers are the ones who get the Best Picture Award for a reason—they bring it all together.

"There was a programme that offered thirty artists in the UK or Nigeria £3,000 to work on a play. It was during the London 2012 Olympics, and we got to work with Theatre Royal Stratford East. My first version was called My Big Fat Nigerian Wedding but it transformed into a play about a mother, daughter, and grandmother. The daughter comes out and the family secrets are revealed. I developed it for Stratford a couple of years later as the play called Sunday. There is a trailer for it filmed at rehearsal on YouTube.

"I made a feature film, M.L.E., produced with two other producers (Joseph a. Adesunloye and Paul Bennoon), a comedy-thriller based on a true story about a Canadian actress looking for job in UK. She loses her leg, and becomes a spy for a rich family to keep an eye on her daughter. It's a comedy of errors. She messes up all the way, and solves the case by accident."

The Cargo Collective has a description of the film and some of Joy's other work.

"I've made another movie, White Colour Black. It will be premiering at the London Film Festival this year, and we hope for a release date after. It's about a young photographer who leads this hedonistic life in London, but when his estranged father dies he has to go back to Senegal to face a few truths and also learn about life. It's a coming-of-age tale."

Joy is producer of the film along with Joesph a. Adesunloye who was also the writer-director—more on the film's website.

Joy also co-produced another short, dark thriller with Adesunloye that showed at the Raindance Festival, Beyond Plain Sight. A trailer can be viewed at Vimeo.

Joy: "I get finance from everywhere, different schemes. We have deals with the crews who get a percentage; everyone gets paid from a pot of money. We get deals with rental house to pay for postproduction. We budget carefully and make sure there are minimal special effects, where possible.