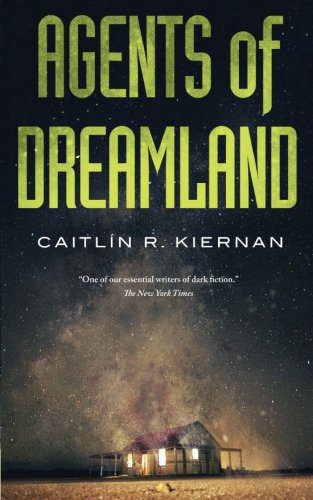 Conspiracies imbue the innocuous with meaning. Secrets have to be maintained, their tracks covered. Conspirators obsess over the details which must be covered up; conspiracy theorists obsess over what those details reveal, because the details are where obvious explanations slip aside. It's lonely in the midst of that obsession, in the company of secrets that others can't know or won't believe exist. And in the midst of that loneliness is Caitlín R. Kiernan's new novella out from Tor, Agents of Dreamland.

The story opens in Winslow, Arizona where the Signalman, an agent from Albany, waits in a diner for Immacolata Sexton, an agent from Y. An incident—a murder, or something stranger—has taken place along the Salton Sea and the agents are meeting to exchange information between their two shadowy organizations. The year is 2015. The Signalman is tired. His Diet Dr. Pepper is flat; his shoes, purchased at JC Penney, have been worn down by his pacing through the town.

The character who opens the novella is full of knowledge: “The Signalman knows the waitress' story, just as he knows the stories of the two cooks and the dishwasher, just as he knows the names of the proprietor's three daughters. Every little thing that the Signalman doesn't know is a blind spot, a weakness he can't afford and won't abide.” If each story teaches you how to read it, the choice to start with the Signalman is important, because he is intensely interested in knowledge, down to the smallest detail. The Signalman pays close attention to the details because what he doesn't know can hurt him. He teaches the reader that there are hidden truths and that the smallest detail is important to seeing them: he teaches the reader to approach Agents of Dreamland with the mindset of a conspiracy theorist, hungry for detail.

The novella feeds that hunger with a smorgasbord of details. A picture develops with each chapter, a picture of a struggle for the fate of the earth. On one side of the struggle are the Signalman and Immacolata Sexton, and the shadowy organizations for which they work. On the other side is an invading force from the edge of the solar system, not human but acting at times through human allies. A picture forms, but somehow that feast of details is both too much and too little to see this picture in full. I don't mean this as a critique. I don't believe that stories must fully explain themselves. What I mean is to point to an effect, a sleight of hand, that pushes the reader off-balance. First, the novella tells the reader that truth is hidden in the details. Second, the novella introduces mysteries to be solved and questions to be answered—what are these shadowy organizations, Albany and Y, and what do they do? What happened along the Salton Sea? Third, the novella feeds the reader a series of details, which seem like explanations. Fourth, the reader tries to match the details to the mysteries. But the details and the mysteries don't quite match. There are extras on both sides. A tangle of loose threads.

As an example, look at the character of Drew Standish, the man behind the strange incident along the Salton Sea. The man being investigated by the Signalman. Standish is a charismatic figure, offering his followers an importance and a recognition they haven't experienced elsewhere in their lives. He preaches to them of hidden knowledge, accusing shadowy actors of the kind of conspiracy that the reader knows from the Signalman's presence is possible, whether Standish gets the details right or not. “How much have you thought about what was really in back of the digital switchover in 2013?” he asks. Or, “Just stop and fucking think. The NTIA, the OPAD, the Office of Spectrum Management, MediaFLO, fucking Microsoft, and definitely fucking Apple. You ever wondered about the Beatles and Apple?” Standish accuses through implication rather than explanation, listing the details that according to him should make you wonder, letting his audience fill in the blanks. In a different context, Standish would be no more than a cult figure, a liar manipulating the details of the world to fit a narrative of self-importance. Within Agents of Dreamland, where details reveal hidden truths and shadowy actors are real, nothing he says can be fully dismissed.

Standish's rants and lectures manipulate his followers—and the reader—into painting a picture that supports his campaign of self-aggrandizing annihilation. (Some people want to be responsible for the end of the world.) He offers detail after detail with the implication that there is an obvious connection between them, capitalizing on the ease with which the human mind can draw connections between even the most disparate dots. Agents of Dreamland, as a whole, manipulates the same patternmaking habit of the human mind. Over the course of the novella, Kiernan gives us just enough to see the overall picture—the invading force of inhuman creatures, the agents trying to act against them—but with enough gaps that we can't be sure what fits and what doesn't. The novella leaves a sliver of doubt about even the most innocuous details. Is the connection between the Beatles and Apple Computers as relevant as Standish implies? Is the Signalman's silver watch, described in detail in Chapter 4, important for more than character reasons? Maybe. Unclear.

Given this interest in patternmaking, it is unsurprising that the novella uses a number of detective tropes. For much of Agents of Dreamland, the cosmic happenings are in the background. The foreground of the story is the Signalman's investigation of Drew Standish and the incident at the Salton Sea, with the reader ricocheting between the Signalman and Standish. The dynamic is familiar from many popular television shows, wherein a detective or investigator or agent follows the trail left by a criminal or mastermind or misunderstood monster, assembling the crumbs into a pattern of explanation. The worn-out, alcoholic detective is played convincingly by the Signalman, who spends a lot of time drinking Scotch out of paper cups. Standish, of course, is the cult mastermind, manipulating the young and impressionable into destruction. In a way, this could be a miniseries on AMC.

But only in a small way. The center of this story is not the evil acts of man or the degenerate human world. No, the center of this story is Lovecraftian cosmic horror. And so we have Immacolata Sexton, who is something not quite human, sliding in and out of time to show the reader events of the past and future. Her opposite number is Chloe Stringfellow, jealous disciple of Drew Standish, who tells the reader, “I make no secret of the fact that I want to be the first to bloom,” a statement she means literally, as the reader discovers when Chloe—or Chloe's body—does finally bloom into something fungal and unearthly.

Despite the descriptions of fruiting bodies and Lovecraftian creatures, I found the novella's horror most effective within the stream of seemingly innocuous details. Kiernan is highly skilled at slotting fictional events into real timelines, creating alternative histories that reverberate from the page out into reality. In Chapter 4 (titled “A Piece of the Sky (August 17, 1968)”), for example, we learn about a black and white movie the Signalman watched when he was eight years old. The Star Maiden, directed by James Whale, was the only movie written by Edgar Rice Burroughs. The making of the movie was followed by a series of unexplained deaths and odd happenings. “Make of this what you will or make of it nothing at all,” says the narrator, as if the reader hasn't been primed to make a great deal of everything in these pages. Based on what I could find, James Whale did not direct and Edgar Rice Burroughs did not write a 1934 movie called The Star Maiden. There was no cast, no curse. But the movie feels like it could be a hidden part of history, and if it is real, then why not everything else?

Or maybe I'm just particularly susceptible to secret histories, that sense of something more happening behind the everyday, even if that something more is the end of the world, even if the ending world feels so lonely, as it does here. The moments of human connection in Agents of Dreamland are small, tentative, and compromised. Drew Standish reaches out to Chloe Stringfellow in an alley in L.A., making her cry with an offer of freedom and salvation, but by the end of the novella we see that salvation as personal annihilation and an attempt at the destruction of the world. Immacolata Sexton, in her travels through time, brings canned peaches to a woman in a future L.A., but her visit also reveals a city invaded, the residents becoming less and less human every day. Peaches are cold comfort in a world already lost. Late in the novella, the Signalman and Immacolata Sexton talk on the phone, sharing a moment of camaraderie, but: “[The Signalman] only wishes it had left him feeling even the smallest bit less afraid, the smallest bit less alone.” It's a measure of Kiernan's ability that the reader closes the book feeling much the same.

Like Loading...
© Copyright 2017 By: Sessily Watt
About Sessily Watt
Sessily Watt endeavors to embrace uncertainty and the limits of her own knowledge. She often fails, and tries to embrace that failure as well. Her writing has appeared in NonBinary Review and Bookslut. You can find her at sessilywatt.weebly.com and on Twitter as @SessilyWatt.
One comment on “Agents of Dreamland by Caitlín R. Kiernan”
Strange Horizons - 2017 in Review Part One By Our Reviewers

[…] novella—Agents of Dreamland by Caitlin R. Kiernan, whose mastery of cosmic horror grows more penetratingly assured with each […]