It's been three years, give or take, since I first brought World of Warcraft (WoW) home from the stores and installed it on my computer. A lot has happened since then. The Burning Crusade has arrived, raising the level cap to 70—and now Wrath of the Lich King, with levels up to 80—while the number of my companions in this virtual universe has topped eleven million. I've gone from raiding The Molten Core, to more ambitious destinations. It's an adventure—full of friends and heroes—that never ends. 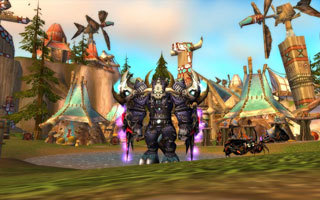 A screenshot from World of Warcraft. Click to enlarge.

The other thing that never seems to end is my parents' critical, sometimes patronizing attitude. It was not bad at first, but now whenever I hear my father stop by the computer room and say, "Hey, how about doing something outside, for a change," I just want to hit something. That, and other variations of, "You're wasting your life, you know." But of course, they don't understand. That's my rationalization.

Today is the generation of now, and compared to what we can do online, the outdoors seems rather tame. Fewer people, and not as much to do. I know my parents see WoW as "sitting still and pressing buttons," but it's more than that, somehow. That's how I feel about it, at least, and I am sure that I am not alone. You're never alone in the World . . . of Warcraft.

Lately, video games have been the target of a lot of controversy, with various groups blaming them for tragedies. In an article about a teen suicide, it will mention somewhere that he was an avid WoW player, as if that is somehow relevant. If you ask me, I'd guarantee you that games like WoW help a lot more people than they hurt. If we could just make the grownups understand this. I would also bet you that the people who blame games for tragedies like a suicide have never played the games, either.

For my first year of high school, I had virtually no friends. What made it a lot more bearable was being able to sign on every evening, and Friday night, for a nice quest with friends I had been playing with for a while. Together, we raided the Deadmines. We moved up through the ranks, together. My parents, of course, claimed that I didn't get friends, because I stayed inside playing WoW. But I don't really care. I can't go on epic quests in the real world, anyway.

I remember my dad mentioning this pseudoscientific theory he had read: that we would never contact intelligent life, because by the time an alien race was advanced enough to have the technology to contact us, they'd all be busy playing their hyper-advanced computer games, 24/7. It was only lying in bed later, that I realized how exactly he had meant this to apply to me.

And time passed. By the end of my second year of playing, I had finally gotten some friends. Real friends, whom I could hang out with. My playing time went down, to the point where my Guild leader gave me a firm talking to for missing a raid. They were missing their best priest, so the healing was lacking. That talk really flicked a switch inside of me.

My friends outside WoW were cool, and they had hobbies. We even started a band at one point. (Don't ask how it went.) And in January, I made my decision.

Deleting my character was one of the hardest things I have done. I'm not even ashamed to say that I almost shed a tear, as I spun him around for one last time, looking at all the badass healing gear I had accumulated. Two clicks later, it was done. LulzMastah was gone, for good. After that, it got easier.

No, I won't say I was addicted, and my final word is that I look back on the last two years as a time filled with magic, and friendship. I still keep in contact with a bunch of my WoW buddies, though I don't play. A few of them have quit as well. But it was definitely fun while it lasted, and I don't regret a moment of it.

In many ways, WoW is more than just a game. It's much more than that. It's a new social landscape. And I know it helped me, when I needed it.

I just can't help but wonder what it will be like in thirty years, though. If WoW is the beginning, what will the middle look like? If progress keeps going at this rate, we may have some very interesting philosophical questions on our hands, about how we function, and interact as human beings.

Why try to contact other planets? We have our own world of magic and wonder right here. So in the end, what will win for the humans? The universe, or the World of Warcraft? By personal experience and testing, I have to conclude that the universe has gained an early lead, but Warcraft is gaining, by strides.

Like Loading...
© Copyright 2008 Keith Pike
About Keith Pike
Keith Pike is 16 and, so far, he has lived in three cities, spanning two continents (not including Azeroth). He writes whenever he doesn't feel lazy, which unfortunately isn't quite often enough. Even so, he has written two novel-length manuscripts, both unpublished, though he hopes that may change, someday. His email is keith.pike@hotmail.com.
No comments yet. Be the first!