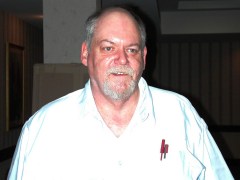 Glen Cook began his writing career in 1970 after serving several years in the navy. He attended the Clarion Writers Workshop that year (where he met his wife, Carol), and at age 26 launched a career that includes over 40 novels and numerous short stories. He writes comfortably in both fantasy and science fiction, but his fantasy novels stand out for their gritty realism and vivid characterization. The Black Company series (most recently, Water Sleeps and Soldiers Live) is epic fantasy, but instead of being told through the eyes of kings, nobles, and courtly wizards, it portrays the horrors and victories of war from the perspective of the "grunts" in the front lines. Angry Lead Skies is the latest novel in his popular Garrett Files series. Garrett is a hard-boiled detective in the city of Tunfaire. Every novel gives the reader a mystery worthy of Sam Spade or Sherlock Holmes, but adds the elements of magic and monsters.

I met Glen Cook at WindyCon in Chicago and asked for an interview. Carol joined us to listen in.

Donald Mead: You're known for a contemporary voice in your writing, even in your fantasy novels. What led to that style?

Glen Cook: Early on in my career I decided that even if people happened to speak whatever language they spoke in their situation, they'd just be speaking their colloquial language to one another. An omniscient author wouldn't intrude. It ought to be the way people really talk. That's what I try to do all the way through. I find myself becoming a lot more formal in my first drafts nowadays than I used to. But like the Garrett books, the idea is supposed to be like sitting in a bar telling the stories of his adventures rather than someone writing it down and being formal about it. I just had a discussion with my editor about this. [Laughs] The copy editor would correct my grammar when my characters were speaking. No! These are ordinary people working on the street. They didn't go to college.

DM: I'd figure your editors would be used to your work by now.

GC: Oh, editors change almost weekly and copy editors do stuff on contract. A lot of them are writers who get paid for copyediting a manuscript. It's a way to pay the bills. On the Garrett series [published by Roc] I've had at least five editors over the years and on the Black Company series at Tor, probably more than that.

DM: The Black Company series became very popular among the troops in the first Gulf War in 1991. Have you experienced anything similar during this current conflict?

GC: Yes, as a matter of fact, last year at a convention a guy came in specifically just to meet me. He was in the 5th Special Forces group that was in Iraq before the war actually started, and he had spent a good deal of time in Baghdad. He said the group had one set of Black Company books, and they fought each other over those books more than they fought the Iraqis.

DM: Why do you think the Black Company series is so popular among soldiers?

GC: Well, I'm told that it rings true. The characters act like the guys actually behave. It doesn't glorify war; it's just people getting on with the job. The characters are real soldiers. They're not soldiers as imagined by people who've never been in the service. That's why service guys like it. They know every guy who's in the books, and I knew every guy who's in the books. Most of the early characters were based on guys I was in the service with. The behavior patterns are pretty much what you'd expect if you were an enlisted man in a small unit.

DM: What are you currently working on? Is there a future for the Black Company?

GC: Someday. I have two more, A Pitiless Rain and Port of Shadows, planned for the future, but I have a bunch of other stuff I have to do first that's under contract. It will be several years before a new Black Company novel comes out.

DM: There wasn't much left of the Black Company in the last book in the series, as I remember. How do you bring the characters back?

There's a role-playing game based on the Black Company, which came out just in time for Christmas. The game is with what I am told is one of the better companies, Green Ronin. I'd never heard of them before they approached me, but people in the industry tell me they're good. It's based on Advanced Dungeons and Dragons (d20). I know nothing about gaming, but it's an AD&D system that is adaptable to a lot of stuff. They're writing a bunch of special rules because my magic works differently from [other universes]. It looks interesting. I saw the first draft of the book, and they certainly got all of the history of the Black Company right. Whoever did the research did a very good job.

DM: Tunfaire, the principal city in the Garrett Files series, has the feel of an American city in the 1970s: striking economic divisions, racial unrest, and an unpopular war abroad. Was that your intent?

GC: Well, yes, but it's not just the 1970s. That's the history of mankind, especially in large cities. Take a city like Byzantium. There were a thousand different neighborhoods, all different religions. People would regularly riot against one another and commit murder. There was no police force so it was a much more laissez-faire, unpleasant life than we live now.

DM: Whispering Nickel Idols is the next book in the Garrett Files series. Are all the favorites going to be back? The Dead Man, the God Damn Parrot, and all the rest?

GC: Oh yes, most of them will be back. The parrot doesn't have much of a role; Garrett has managed to get him out of the house. Readers who like the series won't be disappointed. There're gorgeous women and strange goings-on. That will be out in May of 2005.

I've even started work on the next in the Garrett series. I have no idea what the title will be. It'll start out as if it was about amateur theatrics, but it will end up being something else.

DM: I remember speaking to you a year or so ago concerning a new series you were working on, a "what if" series. In this case, "what if the Mediterranean Sea was a landlocked body of water?"

GC: Yes, that's it. It's called the Instrumentalities of the Night series and the first book is called The Tyranny of the Night. It should be in bookstores by June of 2005. The Mediterranean is blocked and also severed from the Black Sea. Because of that, it's much shallower. There's also an ice age encroaching, which is making world sea levels drop dramatically. It's a fast-moving ice age. Magic works. The political situation is roughly that of the early twelfth century with crusades and corrupt popes and so forth. The setting is what would be Italy in our world.

DM: How does the world change with a landlocked Mediterranean Sea?

DM: Does this lower Mediterranean Sea level have a political impact on the setting of the book?

GC: Politics is not so much impacted by geography than by the fact that magic works. There's a strong party of anti-magic people that is as fanatical as the Inquisition was at one time. Religion is very important in this book. I'm not a religious person myself; I don't even understand it for the most part. But I wanted to write a setting in which religion affected everybody's life. That would be the world in the twelfth century, where the Christians were extremely dedicated to Christianity, the Muslims were extremely dedicated to their beliefs, and the pagans in those parts of Europe that were still pagan were very stubborn about not becoming Christians. That, plus the fact the magic does work and gods are real and can show up on stage and bust things up—that's what influences politics: religion and the use of magic.

The biggest force at work in this world is the fact that magic is starting to fail and because magic is failing, the world is starting to cool down really fast. The ice is expanding from the north into continental Europe at a very fast pace. In just two hundred years, Scandinavia has gone under, most of the Baltic is frozen over, and the ice is in northern Germany, or what would be Germany.

DM: You once said that you would have more time for writing once you retired. Now that you're retired, do you find that to be the case?

GC: No. [Both Glen and Carol laugh]

DM: You have four or five books in the pipeline or on the drawing board. It sounds like you've been pretty productive.

GC: Well yeah, but it took me years to do them. At the old plant (GM assembly plant) I was working six days a week, helping coach Little League, and still getting three books done a year. Now I'm retired, theoretically. I've got nothing else to do and a book every fifteen months is a miracle, it seems like. Of course, they [the books] have gotten fatter because now we've got computers. There always seems to be something else that needs to get done first. In the early days when the kids were little, they didn't require a lot of time. I've got one now that takes two to three hours everyday just hauling him around. I'll be so glad when he gets his license.

DM: I have a couple of questions on the business of writing. How did you get your agent?

GC: Russell Galen is my agent. He wasn't my first agent. I wrote and published my first book on my own and got a very bad contract out of the deal. A guy who was relatively new at Scott Meredith Literary Agency read the book and liked it. He went to his boss, Scott Meredith, to ask if they could recruit this guy. He, as a junior agent, needed to find clients, and he recruited me and then promptly left the firm. Russell came aboard [the agency] straight out of college and got my account, and we've been together now almost as long as I've been married to my wife. Since 1976 he's been my agent. [Editor's Note: Mr. Galen is now with Scovil, Chichak, Galen, Inc.]

DM: How important was Clarion to your writing career?

GC: Early on, very important. I learned a lot there. Clarion can't teach you talent, but it can show you what you're doing wrong. I learned not to overwrite, to keep things simple as far as sentence structure is concerned. My early attempts at writing were very much influenced by classical British fantasy writers who tended to be very flowery and ornate and lapsed into classical Greek as they were going along [laughs] and expected you to follow it. I learned that modern American readers aren't interested in that. I learned a number of valuable lessons at Clarion.

DM: What advice would you give beginning writers?

GC: The main advice I've given every beginning writer I've ever talked to is, "Do it." You've got to stop talking about it and sit down and do it. Put your ass in front of a computer and do it.

Like Loading...
© Copyright 2005 Donald Mead
About Donald Mead
Don [email Donald Mead] works at a car manufacturer in the Midwest and is currently working on Feral Wizards, a fantasy series. Don previously interviewed Joe Haldeman for Strange Horizons, and he recently published a short story, "The Planting," in AstoundingTales.com.
No comments yet. Be the first!