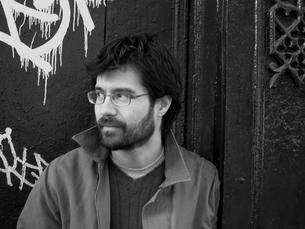 Pak edits FilmHelp.com and AsianAmericanFilm.com. He was named one of 25 Filmmakers to Watch by Filmmaker Magazine and was described as "a talent with a future" by Elvis Mitchell in the New York Times. His website is at www.gregpak.com, and his new book, Robot Stories and More Screenplays [Strange Horizons review here], collects scripts from Robot Stories and his popular comic shorts with commentary on his creative process.

Gwenda Bond: Could you start off with a little bit about your background and how you came to write and direct your award-winning shorts and then Robot Stories?

Greg Pak: I studied political science as an undergrad at Yale and went back home to Texas to work in politics after I graduated. But I'd always written short stories and done theater and drawn cartoons and loved the movies; eventually I had the chance to get involved with a student filmmaking group when I was studying history at Oxford University and all the lights came on. I went straight to the NYU grad film program from Oxford. I've made over a dozen short films over the years; Robot Stories is my first feature film.

GB: In the introduction to Robot Stories's script you talk about your early influences, singling out Ray Bradbury. What do you feel you've learned from Bradbury's work? Are there any favorites? Any other writers or directors who have been direct influences on your own work?

GP: I grew up reading Ray Bradbury's short stories, watching The Twilight Zone, and reading Marvel Comics, all of which depicted multidimensional characters struggling to make sense of their lives in the face of fantastic events. I've realized that many of my favorite plays and movies work in a similar way, combining genre with great character work—Macbeth is a kind of action/horror story, Seven Samurai is a samurai picture, High Noon is a western, and Jaws is a monster movie. All of these pieces unabashedly embrace their genre elements but use them to tell utterly compelling stories about complex characters.

My favorite Bradbury stories are probably "The Veldt" and "All Summer in a Day," although I just reread "The Martian Chronicles" and was reminded all over again of how brilliant it is.

GB: I think it's interesting to think about Robot Stories as a "fix-up" in the grand tradition of the genre, where a writer takes several short stories, usually linked by setting or characters (or less commonly theme) and changes or adds enough interstitial material to make the individual pieces work as something larger. Could you explain a bit about where the film came from and how you worked with the material to make it successful as something more than the sum of its parts?

GP: Over the years, I'd written a ridiculous number of short scripts—basically, whenever I had an idea for a screenplay that grabbed me, I'd hammer it out, regardless of whether or not I had any idea of how to actually produce the project. At a certain point, I was looking over my files and I realized I'd written several short screenplays which dealt with robots or artificial intelligence and the human heart. And it occurred to me that the stories might work together as an anthology picture. The challenge was to figure out if the whole could be greater than the sum of its parts, if the stories could work together to tell a larger story. I eventually figured out a viable thematic progression and the project became Robot Stories. Interested readers can get the full scoop on the development process in the introduction to the Robot Stories and More Screenplays paperback.

GB: Is a robot ever just a robot? What makes the concept and presence of robots so meaningful to these stories for you?

GP: All robots are pretty cool—I'm even intrigued by those robo-vacuums. But when it comes to writing fiction, robots become interesting as characters when they acquire the ability to think and learn and feel. Because if you take seriously the kinds of struggles which a thinking, learning, feeling robot would encounter, you end up asking the questions which are compelling for all of us—who am I? what am I doing here? what is this thing you humans call love? As an added bonus, the notion of robots as tools and slaves provides interesting opportunities for political metaphor—similar to the subtle way Bradbury used his Martian stories to explore questions of politics and race.

GB: My next question is unfair. It's the equivalent of asking a parent to name their favorite child. But here it comes anyway. If the four "chapters" of Robot Stories were being dangled over a cliff's edge and you could save only one, which would you pick and why?

GP: "Machine Love" is my sentimental favorite, probably because it was a late bloomer, only really coming together and hitting all its marks pretty late in the editing process. But "The Robot Fixer" has a kind of special glow. . . .

GB: My own personal favorite is "The Robot Fixer" (by a nose!). Did you ever have a special toy or toys when you were a kid, something that still holds a special place for you now?

GB: One of the things that strikes me about your work is how quickly you're able to move from real humor to authentic emotion. The stories are incredibly tightly structured and focused. What's your writing process like? How many drafts do you do of a typical script?

GP: Thanks for the kind words. I spent many years doing improv comedy with groups like the Purple Crayon of Yale and the Pollyannas in New York City, which I think helped me appreciate and develop that combination of loopy humor and genuine emotion.

I write and rewrite and rewrite and then rewrite some more. Different scripts require different numbers of rewrites, but most require a couple dozen or so to really nail down the structure and story. I try to get the dialogue as clean as I can during the writing process, but I'm always open to tweaking lines in rehearsals and on set as better phrasings and more interesting nuances come up.

GB: Many filmmakers and industry types talk about the importance of the screenplay, but you seem to actually put it into practice. How do you view the relationship between the script and a finished film?

GP: The script has to work for the finished film to work—it's incredibly difficult to correct major structural story flaws on set. But the set always brings unexpected challenges and opportunities—it's important to be flexible with the script in order to make the most of a bad situation or take advantage of a beautiful moment on set. Just one tiny example—when we were shooting "The Robot Fixer," we were hit by an unexpected thunderstorm while preparing to shoot the climactic scene in the park. It seemed like a disaster—but then we realized that the rain was perfect for this emotional moment between the mother and daughter. Now I can't imagine the scene any other way.

GB: How do you see your work busting stereotypes of Asians? Are there any particular clichés or stereotypes that you see over and over again that just drive you crazy? What can the artist do to expand or render ridiculous these often arbitrary boundaries?

GP: Sadly enough, mainstream media still tend to depict Asians in embarrassingly one-dimensional, stereotypical ways—sexually objectified geishas and dragon ladies for women, sexually emasculated technicians and kung fu guys for men. So as a filmmaker and storyteller, I've always made an effort to depict Asian characters as multidimensional people who are flawed and conflicted and heroic and sexy and utterly human. That's what I tried to do with Robot Stories, a film which features multiple Asian-American lead characters but which has been embraced by audiences of all backgrounds all around the world.

GB: What work has excited you lately, in the world of film or books? Older things are fine too. I know everyone is always looking for recommendations.

GP: In comics, I'm loving the Fantagraphics Peanuts anthologies, and like everyone else, I'm a sucker for Brian K. Vaughan's Y: the Last Man and Runaways. On television, the new Battlestar Galactica series has blown my mind. Capote is the best new movie I've seen in a while; Marathon Man is the best older movie I've rewatched recently.

GB: You mention in the introduction to Robot Stories the affinity you have for genre stories and elements. What would you like to see happening more often or, the other side, happening less in these kinds of stories, particularly in terms of movies?

GP: With smaller pictures, I'm always a sucker for stories in which the world appears to be the world we're living in now—but there's one loopy element out of whack which sets up a fun genre story in which a single, deceptively simple idea can be explored fully. That's the challenge we set for ourselves with Robot Stories. The old Twilight Zone episodes are probably the best examples of this kind of storytelling. A good recent example is Eternal Sunshine of the Spotless Mind.

When it comes to big movies, I'm always hungry to see a completely conceived world I've never seen before, as in classic movies like Blade Runner, Brazil, Planet of the Apes, Alien, and, of course, Star Wars. These days, Hayao Miyazaki's movies are my best source for that kind of thrill. I can watch Princess Mononoke and Spirited Away and, yes, Totoro again and again.

GB: What are you working on at the moment? What's next?

GP: I'm finishing a couple of new short films, which I'm hoping will hit festivals next year. And I'm writing a new science fiction screenplay, which I'm very excited about but can't yet discuss in greater detail, alas. In the world of comics, I'm writing the Battlestar Galactica comic book tie-in for Dynamite. And my next Marvel project is an eight-page story in the Amazing Fantasy #15 anthology comic called "Mastermind Excello." The story features Amadeus Cho, a boy genius on the run from a nefarious secret agency. The art is by the amazing Takeshi Miyazaki. The book hits stores on November 30, and around the same time, Marvel.com will poll readers to see which of the stories in the anthology will get a miniseries—please feel free to check it out and vote. More Marvel projects will be announced soon—folks can always check www.gregpak.com for the latest news.

Like Loading...
© Copyright 2005 Gwenda Bond
About Gwenda Bond
Gwenda Bond is currently finishing her first novel for young adults. She posts often about books and writing at her blog, Shaken & Stirred, writes an advice column for Lady Churchill's Rosebud Wristlet as everyone's Dear Aunt Gwenda, and coedits Say... magazine with writer Christopher Rowe.
No comments yet. Be the first!