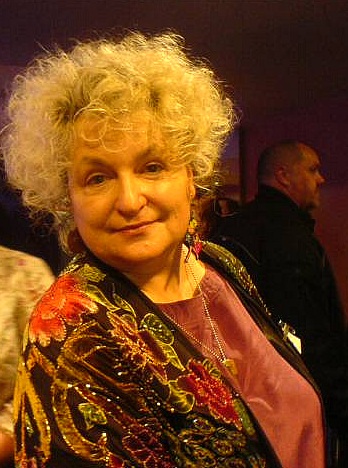 A cursory web-search will tell you that Pat Cadigan is the Queen of Cyberpunk,[1] but who wants to be queen of a moribund genre? BBC TV's Future Fantastic designated her, more promisingly, "the queen of modern science fiction;"[2] Wired, though, may have come closest to the truth with the plaudit "sci-fi maverick."[3]

Pat Cadigan has been amongst the movers and shakers of the science fiction scene since the late 1970s, when—with ex-husband Arnie Fenner—she edited the award-winning magazine Shayol. Her first published fiction appeared in Shayol, but by the early 1980s her short stories were appearing in Asimov's, Fantasy and Science Fiction, and Omni, as well as various anthologies.

Cadigan was the only female author represented in Bruce Sterling's 1986 Mirrorshades anthology, an ambitious attempt to "present a full overview of the cyberpunk movement."[4] Her story, "Rock On," was a down-and-dirty story of a near future where rock 'n' roll is about to become extinct, and only those who've experienced the real thing—"sinners," or synthesisers, providing "rock 'n' roll visions straight from the brain" via ubiquitous sockets and neural interfaces—can keep it alive. That juxtaposition of technology and humanity is a key theme of the cyberpunk movement, but Cadigan brings it to life with a first person narrative that reveals the dark underside of the technology and examines exploitation, burnout and the subversion of self.

Cadigan's short stories, inhabiting that slippery dimension of genre fiction that'd later be marketed as "slipstream" (horror, dark fantasy, science fiction), continued to garner critical acclaim and award nominations. Even in the Eighties heyday of the cyberpunk subgenre, Cadigan didn't limit herself to a single aesthetic, or to cyberpunk themes. "Angel" (1987), which won the Locus Award and was Hugo and Nebula-nominated, is a tale of love and loss with a distinctly sfnal flavour; "The Power and the Passion" (1989) takes a good hard look at the characteristics of a successful vampire-hunter.

Cadigan's first novel, Mindplayers, was published in 1987. Drawing on ideas and characters from some of her earlier short fiction ("The Pathosfinder," 1981; "Nearly Departed," 1983), it examines a near future of recreational psychoses, Brain Police, and virtual reality. Allie Haas—Deadpan Allie—likes to think she's game for anything: offered a "madcap" which will induce temporary, manageable paranoia, she jumps at the chance. Turns out, though, that "temporary" isn't an accurate description. Allie is pulled in by the Brain Police and offered a choice: go to prison, or train as a mindplayer—a psychotherapist working with virtual reality, navigating her own mind and the minds of her patients. Allie's vocational training is an exploration of what constitutes "self," how reality can be Affixed, and the fragile roots of identity.

Cadigan continued to publish critically acclaimed short fiction—her anthology Patterns (1989) won the Locus Award for best collection—whilst working on her next novel. Synners, an expansion of the ideas sketched out in "Rock On," was published in 1991. Described by Gwyneth Jones a decade later in the Guardian as "a prescient investigation of the unholy marriage between digital technology and the profit motive,"[5] Synners is a fast-paced, lyrical mashup of rock music, virtual reality, street art, advertising, and killer memes. It's also, with twenty years' hindsight, unnervingly well-observed. When Synners was published, the World Wide Web didn't exist; few people had access to computers for leisure use; virtual reality hadn't made it out of the labs. Yet Cadigan wrote, with typical assurance, of a noisy, noirish, dystopian future, of characters overwhelmed by sheer noise (physical and mental), of a plethora of information conveyed in media old and new, of the breakdown of the body/technology boundary. The world of Synners feels (un)comfortably familiar from the vantage point of the present day.

Cadigan's fascination with cutting-edge technology—and, perhaps more importantly, with the impact of that technology on those who use it, and those who choose not to—fuelled her growing reputation as a futurist and commentator on popular culture. In 1994 she was one of the speakers at the ICA's conference "Seduced and Abandoned: The Body in The Virtual World," discussing the relationship between gender and technology. Later that year she was a guest at the University of Warwick's first Virtual Futures conference, and she also spoke at the 1994 Women in Cyberspace conference at MIT.

Synners had won the Arthur C Clarke Award for best SF novel of 1991; Cadigan's next novel, Fools—published in the US in 1992 and set in the same future as Mindplayers—won the award on its UK publication in 1995. (Until 2005, Cadigan was the only author to have won the Clarke Award twice.) Fools takes ideas introduced in the earlier novel and runs with them: the protagonist is a Method actress (or is she?) who's crafted alternate personalities for theatrical roles. She wakes, amnesiac, in an upmarket nightclub, remembering a murder. But who's been murdered? And which of her increasingly independent personas is responsible? Everyone is hiding something. Or, rather, everyone is hiding someone.

Structured as a crime novel, Fools is also a virtuoso display of multiple voices, and an exploration of the interplay between memory and identity. Cadigan focuses not on the technology that facilitates this peculiar evolution of Method acting, but on its effects: memory addiction, virtual euthanasia, mindcrimes, famine fanciers, all the new ways in which people can steal from and exploit one another.

In the mid-Nineties, "real life interfered,"[6] and, with her young son, Cadigan moved from her native America to London. She was commissioned to write two non-fiction books (The Making of Lost in Space, 1998, and Resurrecting the Mummy—The Making of the Movie, 1999), as well as The Web: Avatar (1999), for Orion's series of YA novels by established genre authors.

Tea from an Empty Cup, published in 1998, was originally titled Bunraku: the word refers to a form of Japanese puppet theatre, and is indicative of some of the themes that Cadigan explores in this novel. It's a locked-room murder mystery, except that the locked room is a virtual—or, rather, artificial—reality, and the boundaries between AR and the "real" world, between the body and the avatar, have become blurred and permeable. Cadigan's protagonist, homicide detective Doré Konstantin, investigates the death of Tom Iguchi and uncovers layers of identity, reality and deception: nothing in AR is real (but Tom's really dead); nothing in AR is free, and everything you see depends on your level of access, your connection speed; nothing in AR is true, so where does the truth reside?

Konstantin, promoted to head of TechnoCrime (Artificial Reality Division), is also the protagonist of Cadigan's fifth (and most recent) novel, Dervish is Digital (2000). A sequel only in the sense that the milieu is the same, Dervish is Digital subverts some of Cadigan's earlier fictions and delves deeper into the intricacies of digital crime: virtual stalking, copyright violation, freezing billable time . . . Everyone lies (to quote Greg House): AR is built of lies—but law enforcement requires truths (a crime was committed; a particular person was the criminal). Again, the focus is on the interface between body and technology, from Konstantin's claustrophobic ex-partner (who won't go into AR) to the effects of prolonged AR experiences on Konstantin's physical body.

In the last decade, Pat Cadigan has become an icon of the science fiction community. She's edited The Ultimate Cyberpunk (2002), an anthology covering the origins and evolution of the cyberpunk subgenre. Unlike Mirrorshades, which was as much manifesto as showcase, The Ultimate Cyberpunk attempts an overview of cyberpunk, from influential precursors such as Tiptree's "The Girl Who Was Plugged In" and stories by Bester and Dick, via cyberpunk classics (including an excerpt of an unfinished graphic adaptation of Gibson's Neuromancer), to Paul McAuley's "Dr. Luther's Assistant," a story rooted in cyberpunk tropes but with a more bio-science (bio-punk?) flavour.

For five years Cadigan hosted a monthly science fiction reading and discussion event at Borders bookshop in London's Oxford Street; she also organised panels and readings at London's Science Museum as part of the annual Arthur C Clarke Award ceremony. Cadigan is a frequent guest at science fiction conventions in Europe and North America. In July 2011 she was one of the keynote speakers at the University of Warwick's Virtual Futures 2.0.11, discussing FOMO—"fear of missing out," spawned by the rise of social networking—and the ways in which the world was changed by the events of 9/11: "we've given up privacy for the sake of convenience."[7]

She continues to publish short fiction, notably the "Tales from the Big Dark" series, which features in three stories published in NewCon Press anthologies. Set on a space station that's a rescue shelter for alien abductees, the stories examine aspects of memory and personality, and human protagonist Hannah's fraught interactions with aliens and other humans.

Most of Cadigan's novels have been out of print for years. Gollancz's recently-announced SF Gateway project,[8] republishing thousands of out-of-print genre titles as ebooks, will make her work readily available once more. She gives details on her blog[9]" "Orion/Gollancz is bringing all of my work back into print. Synners is going to be in the SF Masterworks series and Mindplayers, Fools, and Tea From An Empty Cup will be published in a single omnibus volume. My collections Patterns and Dirty Work will be ebooks."

Meanwhile, Cadigan continues to work on various fiction projects, both short and long form. In an interview in 2000,[10] she's quoted as saying, "I've tried to write a different book every time, and do something I've never done before." That flexibility, coupled with her fascination with innovation, makes it hard to find a label that'll stick for long.

Pat Cadigan's remarks in the introduction to The Ultimate Cyberpunk could easily be applied to her own career: " . . . [she] has never shied away from asking The Next Question. That's why it still works. . . . the energy is still there."[11]

[1] Marianne Brace in the Guardian, March 1994 (not found online: information from Pat Cadigan)

[7] From video online at http://www2.warwick.ac.uk/knowledge/themes/virtualfutures/patcadigan/

Like Loading...
© Copyright 2011 Tanya Brown
About Tanya Brown
Tanya Brown has been a judge for the Arthur C Clarke Award and was paperback reviews editor for the BSFA's Vector magazine, for which she's also written features and conducted author interviews. She lives in Cambridge, with a large to-be-read pile and a cat (also large), and wishes she were still reading books for a living. Her book reviews are online at tamaranth.blogspot.com.
No comments yet. Be the first!