Mark von Schlegell is something of an oddity. Based in Cologne, Germany, this American author began his career more as a cultural critic than a science fiction scribe; he was a longtime mainstay of the contemporary arts scene in Los Angeles, and his diversion into speculative fiction—and a psychedelic, intellectual one at that—happened sort of sideways.

This is immediately obvious in his work, which is dogged and incredibly esoteric, a wry mix of stupid fantasy and devastating insight; although they're clearly influenced by the awe and slime of pulp paperback sci-fi novels, his are the kind of books that get published by MIT and the anarchist philosophy press Semiotext(e). His first novel, Venusia, throws the "dystopian future" paradigm out with the acid-bathwater, transcending spacetime and spacereason in a feverish gallop, telling the story of the totalitarian psycho-holographic regime of a future Venus. It's confusing, it collapses in on itself, it reaches across a broad length of fictive time, and it's narrated by a plant.

His second novel, Mercury Station, is due out in April 2009.

Claire L. Evans: Donna Haraway, in "A Cyborg Manifesto" [Simians, Cyborgs and Women], proposes that the novel is a nineteenth century form. Do you think the novel is still relevant? If not, what is the literary form of the future?

Mark von Schlegell: The novel is still relevant; it's the "Manifesto" that's old news. The novel was and is the great forge of enlightenment and it was invented, so I believe, not in the nineteenth but in the early seventeenth century, in Don Quixote, a book so long it's almost impossible for one mind to handle.

Yes, we're at a low point today. Not only in novel writing, but in all the arts except TV. This is no reason to run about and say a particular form is dead. There have been low culture points before. Late empire Rome in its full decadence, for instance, fascist Europe, Stalinist Russia. Guess what? The larger cultures sucked. When reason, peace, and economic and social justice are on the rise, so then is the good, published, available novel. There are signs of things getting better already.

Though there's a myth of a quickening, our lifespans are about to get incredibly long and perhaps multidimensional. The novel will have to expand if we hope to keep track and take control of what these lives might mean, into dimensions it hasn't even realized it's had. When space travel is the norm, long hours of flight will best be filled by long novels—longer, I think than we even imagine. Presumably, off Earth, one-third gravity will be the norm so we'll be able actually to hold enormous books rather easily. These extreme books of the future will be extreme-length narratives constituting alternate realities and economies of their own. You can already see this happening in popular literature.

CLE: Do you think a technological singularity is likely?

MvS: This idea of the technological singularity, so I believe, is the theoretical outcome of planned obsolescence in the computer industry. It's very impracticable. Moore's Law is no longer valid by most accounts, and the relation of capitalist technology to utopia is necessarily asymptotic. I don't see it happening. 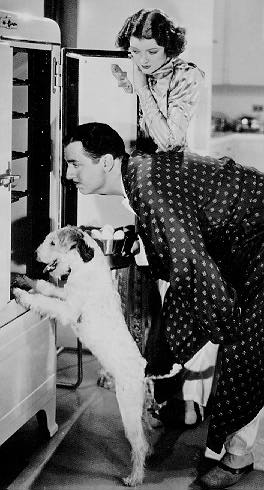 Male terriers played Asta in adaptations of The Thin Man, yet in Hammett's novel Asta is a female schnauzer.

My novelette High Wichita is narrated by a "pet singularity," ASTA. ASTA can do everything, ride a photon, write a book, make 3D holograph recordings, even love, especially love. It's very expensive, illegal (though impossible to be contained), and just at the most miraculous point, just where it saves the day, it's somehow insignificant, a sort of cute little dog. It's modeled on Asta, actually, from The Thin Man.

We don't need the singularity from our technology. We need privacy, good health, free clean energy, renewable resources, and a space elevator.

CLE: Are there writers working outside the realm of science fiction who you feel are on the same page as you?

MvS: For contemporary writing I like to read things where I'll learn tricks of the trade and taste current zeitgeist. You'll find me being inspired by fantasy stuff in the Marion Zimmer Bradley or George R.R. Martin direction, or by romance à la Diana Gabaldon or by more literary writers like Chris Kraus and Fanny and Susan Howe. The ficto-historian Norman M. Klein and I have been on pages together. After Larry David, perhaps my favorite living writer is the comic book writer Alan Moore. I also loved Pynchon's Against the Day, though maybe after all, it is science fiction. I have so much choice that I enjoy most things I read on the Internet. If the whole Internet was one giant webpage, written by Allperson, I would have to say Allperson is a pretty amazing writer from what I've seen.

CLE: Is Venus Los Angeles? Why is so much contemporary science fiction inherently about Los Angeles?

MvS: It remains a city able to inspire the sort of love-hate that helps writers make books. It's a field of paradox. Perhaps it's something like a muse. Venusia was mostly written there and is inseparable from the place in my imagination. But until such moment as the greenhouse effect finally runs away with the bag, L.A. is not Venus. 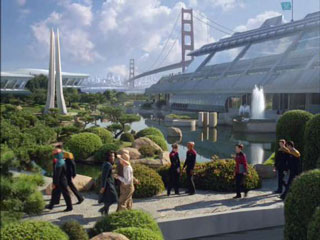 Despite the backdrop of San Francisco, this scene of Starfleet Academy was filmed in Los Angeles at the Japanese Garden of the Donald C. Tillman Water Reclamation Plant.

"Los Angeles," like all city-worlds, is a function of certain particular common desires and fears. I would list apocalypse, freedom from history, glamor, trash, environmental masochism, futurism, sin, tacos, and incredible gardens. An artificial ecology, it's the well-known end of the line. Where the dream busts and shines anyway with insistent beauty. Of course there's a real beauty to Los Angeles, on those perfectly real fake days. Something bordering on the miraculous.

It's not only a site of riot and rip-off, but of inspiration and achievement in the arts. Because of the entertainment industry, it articulates the imaginations of different generations in interesting ways, cutting across class, race, gender, politics. For my generation of Americans it was the invariable background of every film, every show that babysat our minds in those formative years. The very stage of our dreams. Star Trek, for instance, a representative best possible future, was filmed [primarily] there and you can see it everyday, wherever you look. Still, I'd say a lot of SF is about other city-worlds as well: New York, San Francisco, the Pacific Northwest, Glasgow . . .

MvS: It helps science fiction to have a tinge of the journalistic about it. An argumentative spirit of common-sense debate and politics should be in SF if I'm going to like it. A critical voice can be welcome. Poe (the creator) first published SF, in fact, in newspapers as hoax journalism, and he was a savagely intense critic. I came of age as a writer just before the blog and when I came to L.A. there were a number of small-budget, good, lively local magazines that had real local and international effect, particularly in contemporary art. As a critic, I could offend people and do favors, tributes, write about almost anything I wanted to in the guise of anything else and be expected to argue about it in the bar at night with other writers. I even published my own newspaper. Having been that sort of critic taught me a lot about worlds. Nevertheless it didn't lead anywhere professionally. In fact, editors grew increasingly conservative, friends died, ideas were stolen, reused, disrespected, all sorts of depressing things occurred, and the magazines all folded. I discovered how rare an opportunity I had enjoyed only later.

These days I look at it like this. For me, the only way to get at the truth is to admit I'm lying from the beginning. So if you ask me for criticism, expect a story. Science fiction helps my criticism. I often mix it in directly now. I found it adds humor, imagination, makes what is often a terrible chore done for money suddenly fun to do. Of course, this means my criticism is pretty "out there," and appears in publications of the sort rarely available to U.S. readers. But wherever they're interested in cultural criticism by trees, collaborations by time-traveling Stalinist collectives battling time-traveling fascists, fake diaries of schizophrenic eighteenth-century botanists, I'm the go-to guy.

CLE: So what's the trajectory been like between Venusia and your new novel, Mercury Station? Are they related?

MvS: Mercury Station is the next novel in the "System Series." It occurs in the same alternate future history as Venusia. Earth has self-destructed and various human settlements in the Solar System must cope with the loss to survive. However, Mercury Station takes place on another settlement, roughly a century earlier than Venusia, and there's no reference to the Melton colony in the new book. It's a self-contained time-travel adventure, half science fiction and half medieval fantasy.

CLE: I'm curious about the "hard" medieval fantasy aspect of your new book. Is this something you've been interested in?

MvS: Hard fantasy is a growing term, defining fantasy books whose worlds work with a sustained appearance of conceptual logic and physical laws, even with respect to their magic. They often "go medieval" à la Tarantino. Hard medieval fantasy I suppose would involve similar adult rigor as HF [hard fantasy] but try to place the story in the actual medieval culture hard fantasy usually presents as an alternate reality or alien world. HMF [hard medieval fantasy] could also define actual middle-ages fantasy, the pure delicious tales of Marie de France, for instance. These kind of generic definitions serve a great purpose in the organizing of reading (for the fan, the critic, and the publicist) but I don't really think of these terms when trying to write science fiction. What I love about science fiction is that it alone can contain every genre, every book ever written. It's a set of all sets that contain themselves, or something like that.

Like Loading...
© Copyright 2009 Claire L. Evans
About Claire L. Evans
Claire L. Evans is an artist and unqualified science writer whose work addresses the synchronies among culture, technology, and modern science. Evans has presented her earnestly cosmic PowerPoint performances at MoMA PS1, The Kitchen in NYC, the Portland Institute for Contemporary Art's TBA Festival, and the Portland Art Center. Her email address is claire.evans@gmail.com, and her websites are http://www.urbanhonking.com/universe and http://www.urbanhonking.com/spacecanon.
No comments yet. Be the first!