But, most commonly, shows are cut down in their infancy, after one or two seasons. It's rare for an established and successful show to be cancelled, unless it has completed its narrative arc or its creators or stars want to move on. 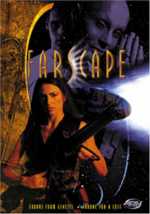 So the SCI FI Channel's abrupt decision a few weeks ago to cancel its hit show Farscape after four seasons came as a huge shock to many. Whether you are a fan of the show or not, its abrupt cancellation raises many questions about the place of speculative fiction in the current TV climate.

If anyone had been asked, before September the 6th, to nominate Shows Most Likely To Be Cancelled, Farscape would not even have been on the shortlist. In fact, after the big-name shows like Buffy the Vampire Slayer and Enterprise, it seemed to have one of the most secure futures of any speculative show.

Not only had the show been SCI FI's most successful original series, but less than a year ago the channel announced (with much fanfare) that they were so satisfied with its success that they were renewing it for two seasons -- the fourth and fifth -- at once.

This June, less than three months before news of the cancellation was leaked, SCI FI's Senior Vice President of Acquisitions, Scheduling, and Program Planning, Thomas Vitale, explained in his online column that: "SCI FI has been able to continue ordering seasons of Farscape because the show performs strongly in the ratings. This is very satisfying to us at the network, as well as to Farscape's producers, since it clearly shows that the series has struck a chord with viewers. Happily, because enough viewers keep watching this terrific series, we can afford to keep making it."

As well as succeeding in the ratings, the show also won widespread acclaim in both the genre and mainstream press, from sources including the Boston Herald, Newsday, USA Today, the Los Angeles Times, and the San Francisco Chronicle. Matt Roush of TV Guide recently described the show as "the most irreverent, unpredictable, sexy, intelligent and exciting sci fi show on TV." The show was actually nominated for an Emmy at the time that the news of the cancellation broke.

Most fans are realists; they accept that if a TV show isn't successful, it is likely to be cancelled, however regrettable that decision may be. But the cancellation of Farscape seems to make no sense at all, and SCI FI has notably failed to shed any light on it.

They were evidently caught on the hop when the news of the cancellation was deliberately leaked by the show's creators to fans online. It appeared that the channel had been hoping to bury the news, and had no press releases or publicity statements prepared.

So far, their only public announcement concerning the cancellation has pointed to the show's high production costs and a small slip in ratings during the first half of the fourth season -- a slip which correlates with SCI FI's own decision to move the show from 9 p.m. to 10 p.m.

No explanation at all has been offered as to how the cancellation squares with previous promises that the fifth season was "locked in," and the SCI FI Channel has declined all media requests for interviews. But whichever way you slice it, it appears that the channel has betrayed its commitments.

Until a few days before the announcement, even the cast and crew of the show were under the impression that the fifth season was guaranteed -- they were informed of the show's cancellation by letter, on the day that shooting on season four was scheduled to finish. The show's complex plot lines had been worked out on the basis that there would be at least one further season. So when the final eleven episodes of the fourth season air in January, Farscape will end with a cliffhanger which may never be resolved.

Media commentators seem as baffled by the cancellation as fans, with TV Guide describing it as "short-sighted," Newsday calling it "disgraceful," and the Boston Herald suggesting that it represented commercial "suicide" on the channel's part and that SCI FI "will now be known as The Channel That Killed the Coolest Show on Television."

One plausible explanation is that the decision has little to do with ratings or viewers at all, and a great deal to do with the internal politics of the channel and its owners.

The show's producer, Sue Milliken, delicately referred in one interview to "a change of direction at the network." Many people had already noted that, since its purchase by tottering media giant Vivendi, SCI FI's programming had dramatically swerved away from science fiction per se towards "paranormal" shows like Crossing Over With John Edward (in which an alleged medium claims to speak to the dead loved ones of audience members). 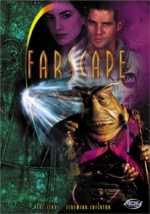 Obviously, shows like this are far cheaper to produce, requiring far less in the way of expensive special effects (and certainly profitable if you have no qualms about exploiting the bereaved). But there are also rumors that this shift represents the personal tastes of the new owners and executives at the channel. Apparently many of SCI FI's established executives, such as Thomas Vitale and Executive Vice President Bonnie Hammer, were strong supporters of the show and fought against the decision to cancel it, but the decision was imposed at a higher level. As one fan summed up the rumors, referring to Vivendi's controversial CEO, "Barry Diller doesn't like space shows."

So we may have a peculiarly ironic situation where the only channel ostensibly dedicated to science fiction is cancelling its best series -- for being science fiction.

There are also rumors that certain of the new executives objected to the show's edginess and determination to push the envelope. Whereas many series aim to find a winning formula and then stick to it, providing another dose of the same each week, Farscape loved to subvert and disconcert, deconstructing and parodying itself, re-playing tragedy as farce and farce as tragedy, riffing on science fiction clichés and mixing genres at lightning speed. One episode, for example, was largely composed of an animated cartoon homage to Chuck Jones, while others drew on sources as diverse as Night of the Living Dead and Lock, Stock and Two Smoking Barrels. Yet the show didn't have the archness that often accompanies postmodernism -- at heart, it was character-driven, and explored the flaws and traumas of its central characters with unusual integrity. Things weren't neatly wrapped up at the end of each episode, and they probably wouldn't be back to normal at the start of the next.

But while this made for electrifying viewing, it's easy to imagine it keeping more staid network executives awake at night. Farscape's head writer-producer David Kemper seemed to hint in a recent radio interview that this was a factor, saying, "We [the creators of the show] are responsible [. . .] for it being cancelled, in a wonderful way. We didn't want to make it boring and bland."

Unlike, say, sports fans, speculative fiction fans can safely be treated with contempt. The basic assumption appears to be that speculative shows are essentially disposable and interchangeable -- that no one takes them seriously. Therefore, one show, however successful and well-beloved, can be destroyed and replaced by another without loss of audience.

And yet, many people cared deeply about the show precisely because it is so rare to find a speculative fiction show which it is possible to be passionate about.

In an era when so many shows seem to be generated by committee, Farscape seemed to be powered by a genuinely individual sensibility -- quirky, prickly, and difficult, but also unique and vital. The cast, writers, and directors all seemed to be genuinely passionate about the show and committed to making it "as close to being an art-form" as possible, in the words of creator and writer Rockne O'Bannon -- a rare thing to hear in an era when the television industry is positively allergic to the "A-word."

Strange, smart, sexy, psychologically rich, superbly acted, and apparently hell-bent on breaking every rule in the book, including its own -- as one fan summed it up, Farscape was "not your father's sci-fi."

Despite lengthy plot arcs comparable to Babylon 5's, the show was also distinguished by its improvisational quality. The writers were known to invent entire plot lines on the spur of the moment, inspired by serendipitous acting or design choices. Actors might improvise or ad-lib on camera. There was always an exhilarating sense that the whole series could swerve off the rails at any moment.

As a result, the show's quality could sometimes be erratic -- but this was by its own standards, and Farscape's weakest episodes could often have ranked with many other shows' best. At its worst, Farscape was good entertainment; at its best, it could be heart-stoppingly daring and often deeply moving.

Often baroque, visually spectacular, and pyrotechnic, it could certainly be described as "space opera" -- but only in the sense in which Samuel Delany's early novels, such as Nova and Babel-17, are "space opera."

Its audience demographics are very different from those of most science fiction TV shows, featuring almost exactly equal numbers of men and women. Generally in their twenties to forties, Farscape fans are typically well-educated, professional, and -- judging by the campaign Web sites, such as SaveFarscape.com and SaveFarscapeCentral, that sprung up within a matter of days -- terrifyingly techno-literate. 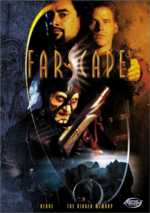 My personal observations have been that Farscape attracts an unusual number of viewers who are fans of speculative fiction in written form, but have never previously found speculative television which could compare. Its fans include at least one speculative fiction author, Caitlin Kiernan, who has already written a series of eloquent articles protesting the cancellation.

So far, the fan campaign to save the show has received unprecedented media publicity, including several features on CNN Headline News. Many fans hope that another network will have the good sense to pick up the show, and there have been a number of rumors that various other networks may be interested.

But much may depend on whether or not SCI FI is willing to sell the rerun rights to the existing episodes. Without these, it may not make financial sense for another network to invest in the show. If it has been decided that SCI FI can make the most money by milking the rerun rights while killing the show itself, there may be little that fans or anyone else can do about it. And if, as the Boston Herald has suggested, the cancellation does sink the SCI FI Channel -- well, the SCI FI Channel is merely a small and expendable part of the Vivendi international media empire.

Ultimately, whether Farscape continues or not may prove to be a test case for whether or not the current TV industry climate has any understanding of or respect for speculative creativity. If an artistically and financially successful show can be killed off so thoughtlessly, it suggests that very little has changed since NBC's infamously short-sighted cancellation of the original Star Trek in the 1960s.

As David Kemper commented: "It wouldn't've been that hard to let the story finish."

Clare Sainsbury is a freelance writer and journalist. Her first book was the award-winning Martian in the Playground: Understanding the Schoolchild with Asperger's Syndrome.