Articles
Size / / /
"Write Your Heart Out": An Interview with Nalo Hopkinson
Sofia Samatar

Nalo Hopkinson was born in Jamaica and has lived in Guyana, Trinidad, and Canada. She is the recipient of numerous awards, including the John W. Campbell Award, the World Fantasy Award, and Canada's Sunburst Award for literature of the fantastic. Her award-winning collection, Skin Folk, was selected for the 2002 New York Times Summer Reading List and was one of the New York Times Best Books of the Year. Hopkinson's novels include The Chaos, The New Moon's Arms, The Salt Roads, Midnight Robber, and Brown Girl in the Ring. Her new novel, Sister Mine, is forthcoming in March 2013.

Sister Mine tells the story of a pair of conjoined twins, Makeda and Abby, daughters of a demigod and a human woman. When the twins are surgically separated, Abby is left with a permanent limp, while Makeda is deprived of their family's defining characteristic, the ability to work magic—an ability which, for Abby, takes the form of unearthly skill with music and rhythm. I talked with Nalo Hopkinson about her new book, Toronto, and her writing life.

SS: Thanks for agreeing to this interview! I'd like to start by asking about Sister Mine. What inspired the book, and how do you see it continuing and/or departing from the work you've done before?

NH: You know, I almost never know how to answer the "what inspired you?" question. It's typically many years between my beginning to work on a novel and when it comes out in print. By then, I've forgotten the origins of the idea. Too, it's never one origination point. A bunch of images, notions, and experiences accrete in my mind until I have the beginnings of a story idea. I accrete a bunch more as I struggle to craft a more-or-less coherent narrative. The whole thing changes and warps and expands and condenses so often during that process that the result is more like the weeds that grow on a compost heap than like the individual components of the compost, which in any case have by then decomposed and intermixed beyond recognition.

I'm fascinated by Christina Rossetti's 1862 poem "Goblin Market." It's written as this innocent, deep love between sisters, and that does ring true, but it's an extremely sexual innocence. The poem also has goblins in it, and fantasy elements in a story will always compel me. I'm curious about the experiences of conjoined twins throughout history. I'm interested in the folklore and belief systems of the Caribbean, where I'm from. I'm interested in how siblings get set up to feel inadequate in the face of each other's accomplishments. I'm interested in the lives and loves of black people, especially the non-heteronormative ones. I'm interested in art and artists. I wondered how to conceive of the sexuality of a nature god, since by implication it is able to love and interact with anything living. Is "sexuality" even the correct term to apply, given that it refers specifically to sexual reproduction? What about a god of death and birth? And since I've lived in Toronto for 35 years or so, its landscape has become part of my mental landscape.

I don't think much about whether a new piece continues or departs from my previous work. The consistent element is that I made it. 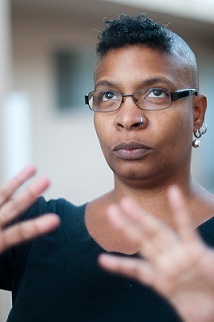 Like Loading...
© Copyright 2013 Sofia Samatar
About Sofia Samatar
Sofia Samatar is the author of the novels A Stranger in Olondria and The Winged Histories. She is the recipient of the William L. Crawford Award, the John W. Campbell Award, the British Fantasy Award, and the World Fantasy Award. Her first short story collection, Tender, is now available from Small Beer Press.
No comments yet. Be the first!