For this week's Staff Stories, I'm interviewing AJ Odasso. AJ and I both joined Strange Horizons in 2012, and AJ has been the co-editor of Poetry ever since. They have published three books of poetry, most recently The Sting of It, and been shortlisted for a number of poetry awards.

How did you join the Strange Horizons team? What were the circumstances, the process?

In early 2012, an acquaintance who worked for Strange Horizons told me that the magazine had lost several poetry editors, and that they would be advertising to recruit new ones before the year was out. I responded to Niall Harrison's call for applications in May or June of 2012. I heard back in July that I'd been chosen as one of two new editors; Romie Stott was the other. At that point in time, the Poetry Department team consisted of Sonya, Romie, and me. The department needed rebuilding and revitalization given that they'd lost several editors in a short time. There hadn't been generational turn-over in quite a while. I've done my best to lead the department in a new direction for the past 8 years. It's actually hard to believe it's been almost a decade.

Characterize the Poetry Department and the way SH approaches poetry.

Even though we're a genre magazine, Romie and I don't let genre constrain our publication choices. 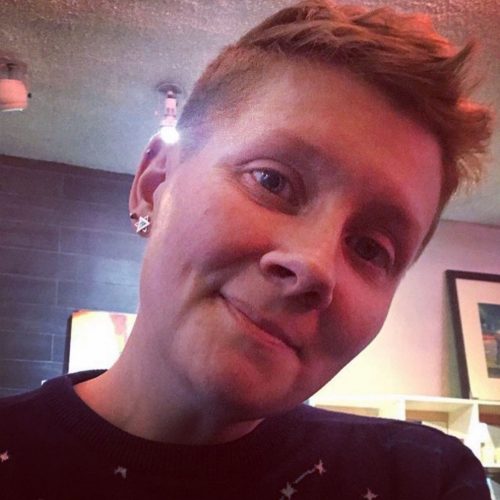 The department has a long history of being somewhat eclectic, publishing everything from experimental to genre to literary poetry, and I consider the work we've done as continuing that tradition. However, I can say that my approach has been different in that I prioritize new and under-represented voices to the fullest extent I'm able. That doesn't mean I haven't published the same poet's work more than once; there are a handful of poets who I personally have accepted and published multiple times. I make sure that any given reading period of mine results in mostly acceptances of poets who haven't been published in Strange Horizons before. A few years ago, Romie and I caught some passive-aggressive criticism for our move away from emphasizing the work of established genre poets. That lets me know we're doing our job right!

What's a favorite story about your time as an SH editor?

I don't know that I have one yet, as unlikely as that sounds. My entire tenure at SH has been filled with severe hardships, all of which have been entirely out of my control. I'm coming out of the most recent of these; after several months of mystery illness during the summer of 2019, I was diagnosed with colon cancer on the first of October. After a number of harrowing exploratory procedures and major surgery in November, I'm still recovering. I won't need chemo as my doctors initially thought, though, so that's a start! In spite of the grief, I've refused to relinquish my work at the magazine. My role at SH is one of the few truly wonderful things in my life. There are so many high-points in the realm of writers being overjoyed to learn they've been accepted that I can't choose just one.

Explain what publishing new writers means to you.

Given that my identity sits at the intersection of several marginalized communities (disability, ethnoreligious, and LGBTQIA+), publishing new writers gives me the ability to make dreams come true for others that couldn't come true for me as early as I would've liked. I'm not 40 yet, but the fact that my work didn't pick up traction until I was nearly 30 really drove home how difficult it is for people in my position to achieve recognition. So many of the writers I've published since 2012 have experienced the same struggles I have. If being able to say their first poetry publication was at SH gives them a running start, then I'm content.

Tell us about your published work.

I didn't start submitting work for publication until 2005, which was the year I graduated from Wellesley with my B.A.  Between 2005-2009, part of my time spent living in England, my first work started to appear in genre magazines and anthologies. By 2010, I had enough poems to put together a first collection; Lost Books was published by UK imprint Flipped Eye. 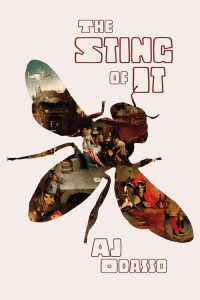 It got a couple of award nominations, People's Book Prize and London New Poetry Award, but didn't win either. I continued to accrue publication credits between 2010-2014, still predominantly in genre contexts. Any time a literary venue picked up my work, it was an incredible shock. My poems defy categorization, and the establishment continues to favor writers whose work is easily categorized. My second collection, The Dishonesty of Dreams, was published in 2014 by the same imprint as my first. My first two books don't come close to accomplishing what my third collection, The Sting of It, does. After revising and adding to my 2016 Boston University M.F.A. thesis, I submitted it to a number of US imprints now that I'm based here. Tolsun Books took a chance and published it in July 2019, and it's already won a major regional honor (Best LGBTQ Book, New Mexico-Arizona Book Awards). Next, it's up for the Lambda Literary Awards and National Jewish Book Awards. I'm kind of holding my breath.

You have frequently written about found families. Why do you like exploring this topic?

For a long time, it was the only sort of family I could rely on. As a result, I've always been drawn to media in which characters end up building families of choice. This feeds back into my fascination with monstrosity, rejection, and reclamation too. I've been writing transformative prose works on this particular subject for almost as long as I've been writing poetry. Fandom is the first place I ever met other people like me, queer and autistic people in particular. The closest friends I have are friendships I formed there. My longest-term fandom friends do, indeed, count as family. Happy endings are impossible enough to find in real life, which is why I persistently dismantle, rebuild, and extend narratives that deny their characters the relationships they deserve.

You are a member of several neurodiverse writing communities. Tell us about why you sought them, what they do for you, and one of the major things those communities are currently focusing on.

The fandom and genre writing communities have huge overlap, and they are indeed incredibly neurodiverse. I feel like I answered this when I addressed found families/families of choice, to be honest! Fandom has always focused on what mainstream storytelling refuses to take seriously and/or treat kindly.

In "Our Queer Roundtable," you mentioned "they/them" and "queer" as some of your favorite words. What words are you into now, and how do they reflect your current interests?

Confessional as a category/descriptor of verse isn't new, but it's never meant more to me than it does now. The Sting of It refuses to flinch away from everything about myself that I didn't feel free to explore in my work prior to 2015-16, which is when I started writing that book. Confessional poetry isn't strictly literary; I've been able to successfully employ features of genre-writing to express the personal. I think that's always been true of speculative writing to a degree, but I'm not so much using the specific language of genre work as I'm using its frameworks. History treated people like me as curiosities, freaks, and monsters of legend. Human monstrosity is something we've been writing about in SF/F/Spec for as long as genre writing has existed, and that's forever. Writing about myself in those terms, at least in my verse, feels like both reclamation and rebellion. I'm not supposed to disclose the things about myself that I disclose in TSOI, especially not on a mythic scale. After the deadly, unbelievable things that have happened to me between 2010-2020, I refuse to believe my existence, my survival, is ordinary.

What poetry has inspired you recently?

I haven't gotten far due to my illness, but I'm rereading the complete works of Emily Dickinson.

Structurally and thematically, she was so far ahead of her time that I feel her work will never lose value to me, as a poet whose work continues to be never quite spec enough for the genre community, and never quite literary enough for the establishment. If Emily had been living and writing today, I suspect her work would fall into the same liminal space. That's an odd comfort.

Like Loading...
© Copyright 2020 By: A.J. Odasso
By: Vanessa Rose Phin
About A.J. Odasso
A.J. Odasso's poetry has appeared in a variety of publications, including Sybil's Garage, Mythic Delirium, Midnight Echo, Not One of Us, Dreams & Nightmares, Goblin Fruit, Strange Horizons, Stone Telling, Farrago's Wainscot, Liminality, Battersea Review, Barking Sycamores, and New England Review of Books.  A.J.'s début collection, Lost Books (Flipped Eye Publishing), was nominated for the 2010 London New Poetry Award and was also a finalist for the 2010/2011 People's Book Prize. Their second collection with Flipped Eye, The Dishonesty of Dreams, was released in 2014; their third-collection manuscript, Things Being What They Are, was shortlisted for the 2017 Sexton Prize.  They hold an M.F.A. in Creative Writing from Boston University, where they were a 2015-16 Teaching Fellow, and work at the University of New Mexico.  A.J. has served in the Poetry Department at Strange Horizons since July 2012.
About Vanessa Rose Phin
Ness is a queer Baltimorean with a gaming habit and a fondness for green things. At home, Ness works as a learning designer and developmental editor; at cons, ve is the damned morning person and extrovert your mother warned you about. Ve started as an articles editor at Strange Horizons in 2012, and loves interviewing people.
No comments yet. Be the first!