Earlier this year, VIDA published an analysis of the gender balance at book review venues. They presented pie charts summarising the 2010 gender breakdown of book reviewers, books reviewed, and writers published at literary publications, including The New York Review of Books, The London Review of Books, The Times Literary Supplement, and many more, and highlighted a stark imbalance. Only in Poetry were there more works by women reviewed than men; at no periodical surveyed were there more women reviewing than men. As you'll be able to see from the list of trackbacks at the bottom of the VIDA post, the discussion of their findings has been extensive; some notable responses include posts by Ruth Franklin and Laura Miller, a dialogue between Jessa Crispin and Michael Schaub at Bookslut (one, two, three, four, five), an interview with Jennifer Szalai, reviews editor at Harper's between 2003 and 2010, at The Second Pass, and most recently an article by The Independent's literary editor Katy Guest, which includes some more data on UK papers. 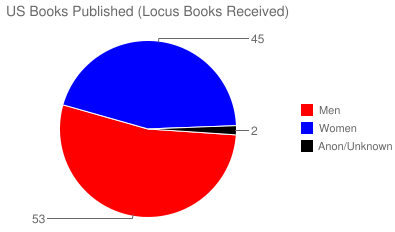 In the US, then, there appears to be a slight move towards parity; in the UK, there is a more dramatic imbalance. This is not unexpected. I didn't cross-reference by genre in either the UK or the US. However, for the UK, an analysis of the books submitted for the Arthur C Clarke Award (which is for a science fiction novel published in the UK) by Martin Lewis reported that only 17% of submitted books were by women, suggesting that science fiction tends male compared to the overall figure, and fantasy tends female. In the US, I don't know of any cross-referenced analysis.

Things to bear in mind about these data: they're not a breakdown of new books published, since the Locus listings include all books received (so there's an edition of Dracula counted in the US stats); they're not a breakdown of number of authors, because multiple books by the same author are counted separately; gender assignment is based on assumptions mostly, and Google in ambiguous cases, and may not be accurate, in particular if there are many pseudonyms in use.

I also combined the US and UK data to get an overall baseline: In addition to the previous caveats, in this case some books may have been double-counted, if they had both US and UK editions in the time-frame.

On to the individual venues, in alphabetical order. 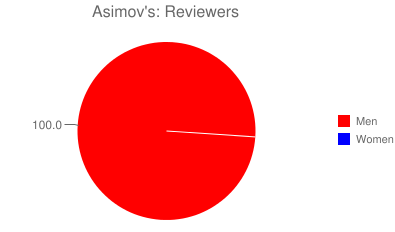 Asimov's has the distinction of being the only venue with an entirely male reviewing staff. However, they only have three reviewers (far fewer than some of the venues surveyed). They are Norman Spinrad, Paul di Filippo, and Peter Heck.

The Magazine of Fantasy and Science Fiction In contrast to Asimov's, F&SF has the highest proportion of female reviewers of any publication surveyed; in fact, it is the only venue surveyed to have more female reviewers than male. Of five reviewers, three -- Elizabeth Hand, Michelle West, and Chris Moriarty -- are women, and two -- Charles de Lint and James Sallis -- are men. 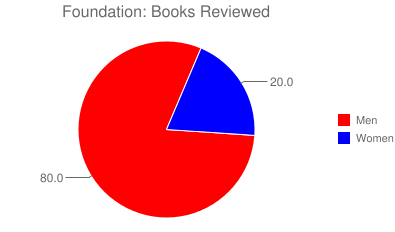 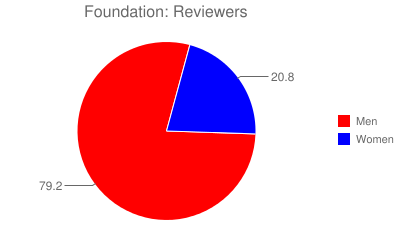 The only academic journal covered in this survey. Note that this analysis applies only to book reviews and reviewers; it does not include essays, which make up the bulk of the journal. 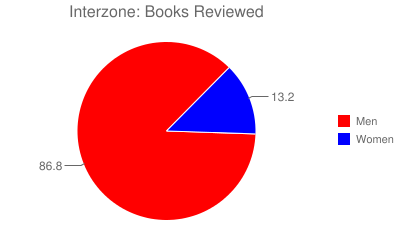 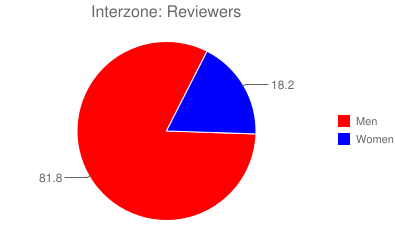 The proportion of reviews of books by women is lower at Interzone than any other publication surveyed. 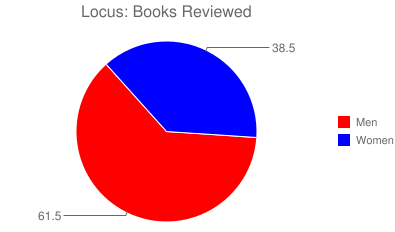 The most comprehensive of the publications surveyed, and on the face of it one of the ones whose output comes closest to matching the input. However, when Broad Universe did their analysis of Locus reviews, they separated reviews into long (more than two paragraphs) and short. To a first approximation, most short reviews in Locus are written by Carolyn Cushman, who covers 8-10 books per issue with a paragraph on each. In 2010, 85.2% of the books Cushman reviewed were by women (perhaps partly explained by the fact that she tends to cover a lot of YA and paranormal romance). Excluding Cushman -- that is, focusing on the long reviews -- the Locus breakdown looks like this: 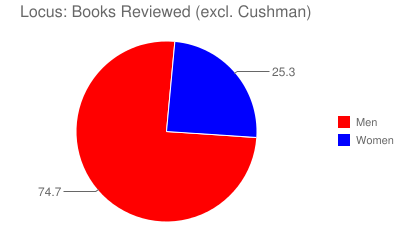 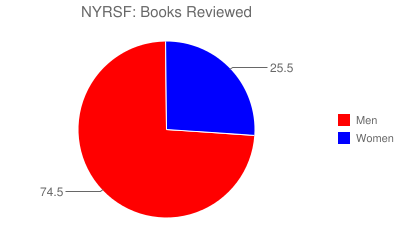 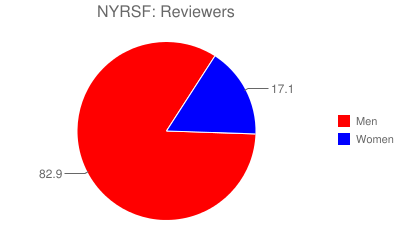 The pool of reviewers used by NYRSF is more male than that of any other journal surveyed. 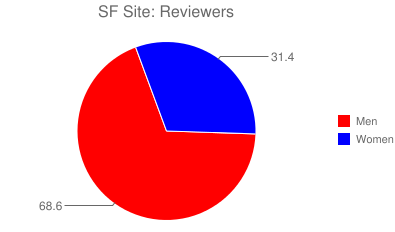 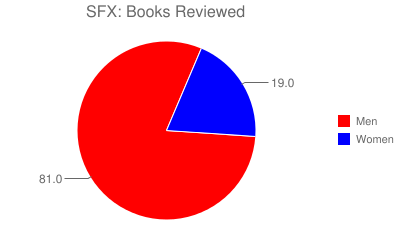 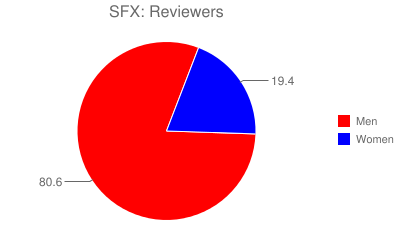 SFX only covers books that have been published in the UK. All other venues surveyed included reviews of books from both the UK and the US (and occasionally further afield). The proportion of reviews of books that are of books by women is higher at Strange Horizons than at any other venue, but still fails to match the raw publication numbers. 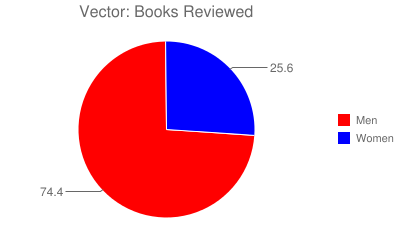 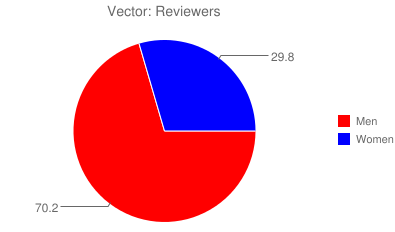