Columns
Size / / /
Stories from the Radio
By: Kuzhali Manickavel

Oh, fam! It seems like only yesterday I was talking about carefree things like fascism, which was definitely not happening in my country at the time. Life was different then—an innocent mix of fatty chemicals, boredom, garbage in the streets, and heady helpings of inequality everywhere. Sewage gurgled gently in the canal near my house. I fought with people over WhatsApp. Someone told me to listen to vaporwave (is this who I fought with? meh idk). Those were sweet days fam. And now, those days are gone. Now, my country is under lockdown because there is a motherfucking pandemic. A. PANDEMIC.

For me, life during lockdown is very much like life when there is no lockdown. Illustrious Acquaintance says this is because I have most pathetic existence. But it’s also because I have a certain amount of privilege. For instance, some people in my country have to die, not because they want to, but because they have no other option. I, on the other hand, don’t have to die right now. I can write words on the internet, whine about how bored I am or how it’s such a headache to have to wash four dishes all by myself. I can call myself a Corona Survivor or a Corona Warrior, depending on my mood. It’s a pandemic, but it’s not super pandemic-y, you know?

Now I am going to use my internet powers to listen to a radio drama called ‘Danger is a Beautiful Blonde’. Let’s do this fam! 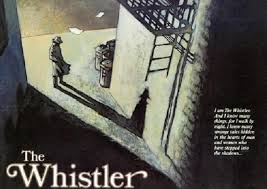 First I want to acknowledge that the title of this radio play is problematic.

I also want to acknowledge that I thought the title was rad even though I knew it was problematic.

Finally, I acknowledge and accept that I Googled ‘where to buy danger is a beautiful blonde t-shirt India cheap.’

Anyway, sorry for my racism.

You know, for a dude called The Whistler, his whistling isn’t that great.

The Whistler just said "Danger is our next door neighbour through all the days of our lives."

I thought about this for a very long time.

The Whistler is very brave and confusing with his words.

So I wasn’t really paying attention but I think this story consists of a young man who is simultaneously bored and an engineer.

And he is standing on the curb. And a blonde lady seems to be stalking him in her car.

She has propositioned him to come for a drive. Feminism at work ladies! #bossbabe

You know, I have never, ever been propositioned by a blonde in a car. Ever.

Granted we don’t have many blondes in cars in my corner of India.

And now with the pandemic there’s probably even less.

Anyway, the dude just said, "I guess we met at the golf course at Biarritz" and she said "I guess that’s as good a place as any" and then he was like "oh I never been there" wow what is happening.

I think these two are just making things up at each other. LET’S ALL DO THIS!

Today all the cats also dejected in the waterfall. Thank you banana, I am.

So now, they have pulled up to a beautiful mansion by the sea and she has offered him a drink and she said "come on" in a very breathy way.

Maybe she has asthma.

It’s a beautiful house with a Picasso and all the posh things fam.

This lady no? At the end of some of her sentences she goes very breathy, like she suddenly remembers she’s supposed to be talking sexy.

Or maybe that’s when her wheezing kicks in idk.

They have the whole place to themselves so I guess they are going to do whatever the equivalent to sex was back in the fifties.

They are walking from room to room looking at the “rich furnishings”.

Welcome to my house, bro. Let me show you the rich furnishings.

Hello! My name is Rich Furnishings.

The lady has now changed into “something more comfortable”. Sometimes this means sexy panties and sometimes it means track pants. I’m not sure what it means here.

Are they kissing? I think they’re kissing.

Now there’s a dead dude under the bed.

And now there’s an ad for the Red Cross, which is also requesting people to give lifts to servicemen on leave.

The Whistler is trying to be creepy but he just sounds like that jerk kid who always says "I know you are but what am I?"

So the blonde lady apparently needs help getting rid of the body because she is not very good at digging graves.

Which means that she put the dead guy under the bed, headed out and accosted the dude, and brought him home so he could dig the grave.

Is there a word for this kind of thing?

I don’t see what she means. What is happening?

Oh she has a gun!

She has a gun despite the fact that she is wearing a revealing dress!

Which means she didn’t go with the sexy panties over the track pants ensemble we suggested whatever I’m not even mad though.

Anyway, Van is now digging the grave and the blonde has asked him to "dig it plenty big" because Van is also going into the grave.

There really should be a word for this.

Van has now thrown a shovel-full of dirt into her face and is rolling down the ARROYO.

Don’t hear that word much around here. ARROYO!

After catching a bus back to his hotel, Van has decided not to go to the cops because he is filled with lusty feelings for the blonde.

THE NEXT MORNING! There is nothing in the paper about any dead dudes and a mysterious young woman has left him a hundred-dollar bill at his hotel.

Because of all these things which have happened, Van is taking a bus.

haha van is taking a bus

Van has gone to a gas station to gossip about things with the attendant who sounds just like Barney Rubble.

Ok, um … a body was found on the beach with a bullet in its head, the dead guy is Alfred Hamilton who is a snooty young society guy, old man Ridgely’s daughter Doris is missing, Ridgely is an art collector and that is his house and Doris is just great.

I’m not sure what is happening now but Van is going to the bus station.

I applaud Van’s healthy use of public transportation.

Now Van is in a store that sells notions which just sounds so cute to me I can’t even tell you.

Is he really going to say excuse me, where I can find a blonde lady called Doris?

Doris is just across the street in a cafe so Van is watching her eat.

Now he is getting into her car without even asking omg!

Van is an asshole.

But Doris, in her own special way, is also an asshole.

I didn’t expect this story to be so bonkers actually.

Van has returned the hundred dollar bill and referred to it as one hundred fish, which doesn’t sound as cool as he probably thought it did.

Also, even though he knows her name is Doris, he keeps calling her "baby".

Doris admits she didn’t think through that whole accosting-strange-man-to-bring-home-and-dig-grave thing.

So she said why’d you come here and he said come here and then he said does that answer your question so I’m guessing he tickled her elbows, which definitely does not answer her question.

Anyway, he’s like come on, we will settle this in two hours with the police. This is called The Confidence of White Men.

Now we are listening to the virtues of Signal gas.

That was amazing. Thank you, Signal gas.

Doris is trying to frame Van for everything but the judge is like, hey lady! We know exactly what happened. Hamilton’s death was suicide and you Doris just messed everything up because you’re blonde and you’re also a lady at the same time.

The judge has let both of them go and Doris said wanna get a drink and Van was like baby look baby, if you see me baby on the road baby again baby, just drive baby past me baby baby. Baby.

That radio play was exactly like it was supposed to be. I laughed, I was confused, I was confused again, and I said that my name was Rich Furnishings. And for a little while, life was different. Let us now bid our hero Van adieu as he boards yet another bus and heads out into that strange, wonderful radio land of fifties America. Wash your hands fam! Don’t lick weird things!

Like Loading...
© Copyright 2020 By: Kuzhali Manickavel
About Kuzhali Manickavel
Kuzhali Manickavel's collections Things We Found During the Autopsy, Insects Are Just like You and Me except Some of Them Have Wings and chapbooks The Lucy Temerlin Institute for Broken Shapeshifters Guide to Starving Boys and Eating Sugar, Telling Lies are available from Blaft Publications, Chennai. Her work has also appeared in Granta, Strange Horizons, Agni, Subtropics, Michigan Quarterly Review and DIAGRAM. She used to blog at http://thirdworldghettovampire.blogspot.com/.
No comments yet. Be the first!