A good piece of fiction stays with you.

An outstanding story or poem is a different thing to each person who reads it. Often we describe this using consumption-words—sweets, wines, large meals—but I consider them more solid than that. Not only do they stay with you, but they’re objects of beauty, things that are observed, made visible for others to witness, shimmering in light and drawing your eyes to it. Like a piece of jewelry, an adornment upon the self for everyone to see, something that a stranger may not know the immediate significance of but still leaves an impression in that moment. Something we can see, in a sliver of the wearer, and get some sense of their value.

It is in that vein that I offer you a small selection of trinkets for you to put on if you wish. Even if they’re not all your style, my hope is that you can at least see how beautiful they are, whether a friend would look good in its glistening form—or more importantly, whether that ring or necklace is exactly what they need today, or sometime soon.

A bracelet adorned with small silver charms in the shape of reassuring fibs which, when touched, calm you long enough to avoid getting into trouble.

Dovey weaves a brief but oppressive world in this flash piece, where someone tries to convince a loved one not to worry about the colonizing alien force on their planet. It’s a terribly heart-wrenching series of swift glimpses, the struggles of their world viewed solely through little white lies. It is the kind of character some of us may even know well, either as a loved one in our own lives or as ourselves, steering someone away from the cruel reality of their circumstances with sweet shifts of untruth. Best to share this with one who has heard such comforts before, and knows they’ve survived hardship as a result.

Five pairs of simple gemstone stud earrings—one garnet, another jade, yet another sapphire, and so on—which each seem to match perfectly in cut and clarity, but upon the closest inspection reveal themselves to be barely similar at all. 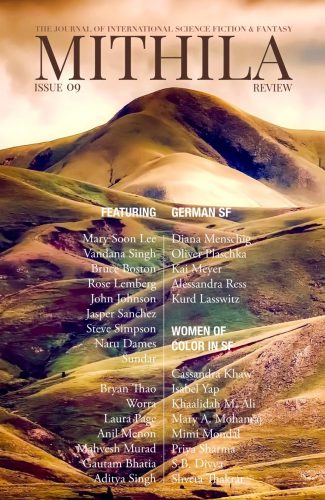 The distinctions between the lived experiences of men and women is well documented, in art as it is in life, but rarely as nimbly as Lee does here, paralleling the words and lives of men and women of history (and one of the future) alongside their imagined counterparts. Exposing the consequences of patriarchy on both bodies—the war versus the wedded life, being punished for one’s love versus having one’s ‘love neither rebuked/ nor acknowledged’—is powerful through those comparisons, the reminder that if any of these persons were in another’s shoes, systems of power would still act on them, and still in completely different but  unfortunate ways, upsetting them for its own ends.

A series of charms on an old, rusted copper necklace chain: an appleseed, a burst of light, an imago, the shape of the sound of a voice, and two distinct shapes of loneliness.

Davenport’s story is a piece of sheer craft, an astonishment of descriptive language that is simultaneously chilling to the marrow and warming to the heart. In the vein of so many fables of witches hidden in forests and eschewing the company of visitors, this story’s witch is but a secondary figure in the lives of those trapped in one sense or another in its house, navigating the strange magical rules constructed around it. In this house rests love, loneliness, longing, and enough fear—for the lives of their loved ones, for their own bodies, and for the life that remains for them. All of this takes place within spaces that are both lushly described and seemingly impossible, as people pay for mistakes and weigh their own sacrifices for others’ sakes within the confines of those rules.

A tooth necklace of graduated rubies, the tips of each one glistening blood-colored and glancing the collarbone with nearly unnoticeable piercing pinpricks.

This piece is absolutely delectable in so many ways both literal and literary—sweet, a thing of many naughty love-bites, a reminder of the consumptions of passion and the pleasure you can glean from giving yourself up to be devoured. On its face, this poem is simply an instruction to a lover of how one wants to be taken, and the kind of intense intimacy it evokes is at once jarring and alluring. To be so close to someone, to be a literal part of them, within them deeply—and more particularly, to develop such a deep trust to consent to such an overwhelming consumption, to put all of you in someone’s jaw and like it and know they respect both your boundaries and your vulnerabilities—is so tantalizing, no matter what shape that consumption takes.

The Future of Hunger in the Age of Programmable Matter | Sam J. Miller at Tor.com

A drawstring bracelet bearing a single jade-hued polymer charm that shifts ever so slightly into familiar, comforting shapes—but has a small but ever-present chance, each day, to bear the shape of inexplicable betrayal.

This piece is a particularly eye-catching one, for me in particular, taking the shapes of many things I admire: sharp voice, fascinating sci-fi worldbuilding as backdrop for a perfectly human story, the exploration of people’s failings and, in all honesty, sex. The backdrop of the story—the overwhelming popularity of nanopolymer technology allowing anyone with enough money to manipulate a portion of matter at will—serves as an interesting scrim behind the central conflict. The work splits in time around the point where protagonist Otto’s world is both figuratively and physically upended by infidelity and technological violence. Witnessing him make sense of both is compellingly intense, full of frustration, with the desire for vengeance and closure. Witnessing the mental process of a man resisting the urge to betray his partner, only to be betrayed by him, makes for quite the drama.

A painted silver pendant of Cyro, the robot co-star of Hyperdimension Warp Record, on a simple silver chain. It seems a little distinct from the anime’s character design in ways that escape your description, and yet seem more genuine than the show’s design, which draws your eye to it. 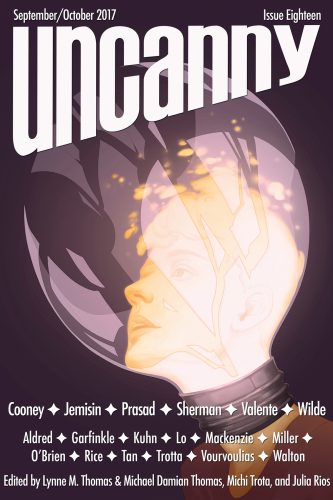 I’m personally very fond of jewels that explore fandom, but Prasad’s exploration through the lens of the impartial sentient robot Computron, is perhaps the most revealing presentation of how fans like things and creatively express those likes in the world. Constantly subjected to the judgements of humans about the novelty and use of technology as part of a museum exhibit, Computron later spends his private time attaching to the representation of another robot in an animated series, and in comparison to that same character’s imagining in fanfiction, finds an avenue for his own self-expression, based solely on correcting others’ misconceptions of robotics. That kind of creative distance is an intriguing way to view fanworks and fandom’s biases—despite Computron not being emotionally motivated in the story, to me the character perfectly parallels the experiences of marginalized fans in many a fandom, struggling to find places to fit their authentic selves into the culture even when the original work has characters resemble them. Any fan of any science fiction series would appreciate a piece like this, but minority fans in particular will appreciate the portrayal of the work, tokenism, silencing, anonymity, and novelty of representation in fandom.

Like Loading...
© Copyright 2018 By: Brandon O'Brien
About Brandon O'Brien
Brandon O'Brien is a performing poet and writer from Trinidad and Tobago. His work has been shortlisted for the 2014 and 2015 Small Axe Literary Competitions, and published in Reckoning, Uncanny Magazine, and New Worlds, Old Ways: Speculative Tales from the Caribbean, among other outlets.
One comment on “The Jewelry Box”

Excellent write-ups and recommendations. Really looking forward to the future of this column!