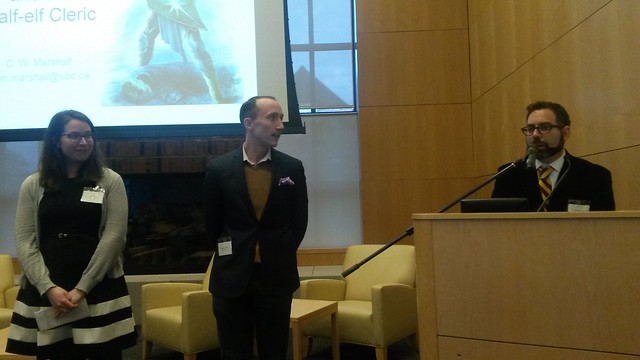 The influence of ancient Greece and Rome in modern science fiction and fantasy is something of a hot topic at the moment, at least within Classical Reception Studies (the field that looks at how Graeco-Roman cultures have been received in later cultural settings). Liz Gloyn writes elsewhere in Strange Horizons about the current state of play in terms of scholarship; here I review what is the third conference in four years to address the area, following on from similar events in Paris and Rouen in 2012, and in Liverpool in 2013 (and a sesson at the conference then known as the American Philological Association in 2011).

The conference was preceded by a pre-conference address by Stevens, on "Science Fiction and Cisformation in Ovid's Metamorphoses." Unfortunately the vagaries of airline scheduling meant that I wasn't able to make that, but I did see the opening keynote address of the conference proper, "Classical Reception and the Half-Elf Cleric" by C. W. Marshall (University of British Columbia). In this very interesting paper, Marshall examined the use of monsters drawn from Classical sources in Dungeons and Dragons, and also some other role-playing games. With wit and insight, Marshall discussed the various transformations of Classical creatures to suit the requirements of game-play, most notably the refiguring of what are one-off monsters in the literary sources into entire races in D&D. Along the way he provided some useful theorization of RPGs.

The other keynote was by award-winning author Catherynne M. Valente. Valente took her B.A. in Classics, and she delivered a passionate defence of the subject, and an explanation of how and why she fell in love with it. The subject is privileged to have a defender such as Valente. Her use of the English language in this keynote was exquisite, and demonstrated why she is such an admired author. She also ran an inspiring question session afterwards—a choice quote was "Rome is where you go for political authority, Greece is where you go for cultural authority," which is very apposite and true.

Between the two keynotes lay a day of parallel sessions. Naturally, this meant that it was impossible to see everything, and I was particularly sorry not to be able to see the paper by Jennifer Rea (University of Florida) on "'War After Next': Defensive imperialism in Captain America: The Winter Soldier & Vergil's Aeneid," and Claire Kenward (University of Oxford, Archive of Performances of Greek and Roman Drama) speaking on "'This is not Troy. This is not even the world. This is the journey through the beyond': Time and relative dimensions in classical reception."

I shall mention a couple of standout papers that I did manage to see. Marian Makins (University of Pennsylvania) spoke on "Memories of (Roman) war in Tolkien's 'The Passage of the Marshes'." In this highly convincing paper, Makins made a solid case for the works of the Roman author Tacitus—in particular his writings on Roman disasters in Germany, via William Morris in his own works—being as significant an influence on Tolkien's Dead Marshes in The Two Towers as the more commonly cited precedent of Tolkien's personal experience on the Western Front in the First World War.

The other highlight for me was Stevens's paper on "The nearest technically impossible thing: Looking at the boundaries of speculative fiction." I was very impressed with this. Stevens began with a tag of the "strong(ly) mistake(n reading)", and proceeded to argue for a willingness to stretch a point in interpretations of texts, even at the risk of being wrong. We as scholars should, according to Stevens, be willing to go deeper than superficial similarities between texts, and make our way through to a deeper epistemological reading. Stevens's conclusion was that the more open scholars are to the possibility of being wrong, the more likely they are to be right.

Over lunch there were three roundtables, to consider ways forward for the sub-discipline. One was devoted to "research", one to "pedagogy", and one to "squee". Since I know I can do research, and I certainly know I can do squee, I went for pedagogy, and was opened up to new possibilities for teaching science fictional and fantasy texts in a Classics context. This was a conference innovation that I think paid off. The Saturday of the conference ended with a showing of Forbidden Planet. On the Sunday transport was organised to nearby Seattle for delegates to attend the Experience Music Project Museum's new show "Infinite Worlds of Science Fiction." I passed on that, as I was flying out of the US that afternoon (a journey that turned out to be so horrible that I shall not speak of it, save to say that I shall never go anywhere near LAX again).

Rogers, Stevens, and Zientek put together an excellent conference. Their commitment to free sessions open to the general public is commendable. Criticisms of the conference are minor. I would have liked to have had access to abstracts, even if just online. The conference felt very much like a Classical Receptions event, with a preponderance of the delegates being Classicists of one form or another. It would have been nice if more people from the sf community could have come along, though the conference was up against Emerald City Comic Con. But my biggest complaint is that the conference was too short, being almost over before it began.

Nevertheless, in the short time that I was there, my ideas about the subject have been reinvigorated, and I was exposed to writers such as Wilhelm Jensen and Jack McDevitt whom I might not otherwise have considered. "The Once and Future Antiquity" has moved the discussion about Classical reception in SF forward significantly. Let us hope for further events to continue the momentum.

Like Loading...
© Copyright 2015 Tony Keen
About Tony Keen
Tony Keen was chair of the 2013 Science Fiction Foundation Conference on Classics and Science Fiction, and is a contributor to Classical Traditions in Science Fiction. His own paper at "The Once and Future Antiquity" seemed to go down okay.
No comments yet. Be the first!