This is the first step in a work in progress. The African Speculative Fiction Society website plans soon to have much more information on Afro-francophone speculative fiction, an effort led by Mame Bougouma Diene. This short page was spurred by Stacy Hardy’s interview, in this chapter, which led to other authors’ names being suggested by Mame, Clémence Lossone, and Yann-Cédric Agbodan-Aolio.

Alex (Agnès) Evans is a medical doctor of French nationality who has lived all over the world including Russia and Togo. She began publishing in 2013. Her books include the high fantasy Les Murailles de Gandarès (2014), the steampunk romance La Machine de Léandre (2014) and the paranormal thriller Skinwalkers (2016). Thanks to Clémence Lossone for the recommendation.

Amélie Diack the author of the fantasy novel Shouna: La Genesise Maudite, first in a series. She was born in Senegal of Senegalese/Martiniquais parents and now lives in France. You can find her book on amazon.fr or read an interview with her in the Litterature D’Ailleurs blog.

Faycel Lahmeur is a translator, critic, and SF author based in Algeria. His novel Amin Ialawani is an imaginary biography of a future writer. Chroniques D'outre Monde is his story collection. He is based at the Univerity of Jijel.

Mame writes in both English and French. He is a regular contributor to English-language fiction magazines, and he was a key contributor to AfroSFV2 (2017) with his novella Hell Freezes Over. His collection of horror stories Dark Moon Rising on a Starless Night was published in 2018. His publications in French, both about migration, include Gaal Gui and “Le Migrant Volant” in GalaxiesSF. An interview with him will appear in the next chapter of 100 African Writers of SFF.

In 1990 this Mauritanian novelist, philosopher, and poet published L’Amour Imposssible, described on the cover by Editions L’Harmattan as a science fiction novel. It is set in the future, but covers many eras, with headings such as Il etait une fois introducing elements from other eras. Adam, the protagonist, in order to preserve love, has to live in a woman’s body.

Ebnou went on to write Barzahk (1994), his second novel, which is also in French, also speculative fiction. Its hero, Vara seeks a better life, and is granted the power to visit the future in a dream. Ebnou himself translated Barzahk into Arabic in 1996 as Madinat al-Riyah (The Windy City).

He was born in 1956 in Mauritius. Educated in France, he received his PhD from the Sorbonne and currently is a professor of Literature at the University of Nouakchott in Mauritania.

Thanks again to Clémence Lossone for suggesting this French-born philosopher and SFF writer. He comes from a Moroccan background. His academic credentials are impressive—he has postgraduate degrees in philosophy from the Université Paris-Sorbonne and from the Université Panthéon-Sorbonne. He is also author of the two-volume (soon to be a third) La Voix de l’empereur. He also has a story in the anthology Fees et automates (2016). 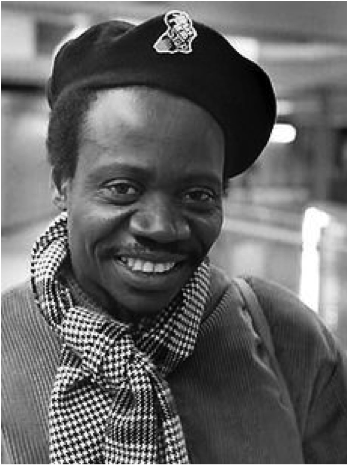 As with the Malawian author Steve Chimombo (profiled as part of the interview with Tuntufye Simwimba), Sony Lab'ou Tansi used fantasy elements to write politically in dangerous times.

His first play, Conscience du tracteur, premiered in 1979 and seems to prefigure the AIDS epidemic. A made-up country is devastated by a new fatal and incurable disease, the creation of a man who wants to change the world—but only the old survive the illness. The play won the Concours Théâtral Interafricain de Radio-France.

This act of prophecy has a terrible irony. Both Tansi and his wife died of AIDS in 1995—the year in which the play was set.

Tansi is a nom de plume. He was born in the now Democratic Republic of the Congo as Marcel Ntsoni. In addition to writing, he was also a director and actor and toured internationally with his company the Theatre Rocado-Zulu de Brazzaville.

Though best known for his plays and performances, he also wrote novels, such as Ante-peuple, translated as The Antipeople, his only novel to be published in English. It won the Grand Prix Litteraire d’Afrique Noire. His writing style in French has been compared to the English prose of Tutuola. James Kirkup, in his obituary for Tansi in The Independent, wrote:

At the same time, he wrote a number of excellent novels couched in delightful French that breaks the rules of grammar and syntax with hilarious effect. In this, Tansi was greatly influenced by South American magical realists and by Caribbean authors of fantastic fiction like the Haitian Jean Metellus and the Martiniquais Aime Cesaire.

He became active in politics, which contributed to his death. The then rule of the Congo removed his passport and right to travel, which prevented his travel for treatment.

Mame Bougama Diene reminded me of Relme Divingu. His real name is Marc Divingou Moussounda, a Gabonese psychologist working in the city of Tchibanga. He also publishes on Atavist as Relme Han. He has published two stories in the Nigeria-based webzine Omenana. His first, “Typewriter”, was published in both French and English. His second Omenana story, “Switch”, was translated from French.

Werewere Liking is the artistic name for Eddy Njock, a protean figure perhaps best thought of as a feminist de-colonialist, traditional artist, and avant-garde multimediaist. She has written poems, novels, plays, and operas, and is well known for her work with puppetry in African traditions.

Her novella length speculative work (translated as It Shall be of Jasper and Coral) is about the creation of a future, post-gender race, the misovire.

Her 2004 novel La mémoire amputée was a more mainstream examination of women’s lives. It won the 2005 Noma Award for Publishing in Africa. The jury said of the novel, “a truly remarkable achievement ... a deeply felt presentation of the female condition in Africa; and a celebration of women as the country’s memory.”

Liking is also well known for her theatrical works such as La puissance de Um (1979) and Une nouvelle terre (1980) were translated into English under the scholarly-sounding title of African Ritual Theatre. Described in the blurb of the first English translation: “The plays re-enact rituals emerging from the grassroots lore of tropical Africa, raise fundamental issues for the benefit of contemporary African audiences, and derive their compelling power from traditional theatrical aesthetics.” The plays use ritual elements to comment on contemporary politics—which could be said to make Werewere Liking a pioneer of traditional belief realism.

She is also the founder of the Ki-Yi Mybok Theatre in Abidjan and the Villa Ki Yi, which is a village housing artists and training impoverished youth in the Arts.

In 2000 she was awarded the Prince Claus Award for services to culture and society. Born in Bonde Cameroon in 1950, she is a resident of Cote d’Ivoire.

Born in 1983 in Abidjan, Ivory Coast, Yann-Cédric Agbodan-Aolio has been settled down in France since his early childhood. He studied both dental surgery and biomedical research, and currently works in the pharmaceutical industry. He is the author of four published books of very different subjects, all of which he is describes as Afrofuturist, mixing utopia and social dystopia: La Consipiration des Colombes, La Nouvelle Humanite, Nouvel Horizon, and Le Ministere des Affaires Paranormales. Auri Sacra Fames (l’execrable faim de l’or) is a supernatural thriller.

Like Loading...
© Copyright 2018 By: Geoff Ryman
About Geoff Ryman
Geoff Ryman is Senior Lecturer in School of Arts, Languages and Cultures at the University of Manchester. He is a writer of short stories and novels, and science fiction and literary fiction. His work has won numerous awards including the John W. Campbell Memorial Award, the Arthur C. Clarke Award (twice), the James Tiptree Jr. Memorial Award, the Philip K. Dick Award, the British Science Fiction Association Award (twice), and the Canadian Sunburst Award (twice). In 2012 he won a Nebula Award for his Nigeria-set novelette "What We Found." His story "Capitalism in the 22nd Century" is part of Stories for Chip, edited by Bill Campbell and Nisi Shawl and published by Rosarium.
One comment on “French-language African Authors for English Readers: A Raw Beginning”

Thank you for all