Non-Fiction, Reviews
Size / / /
In Other Lands by Sarah Rees Brennan
By: Electra Pritchett 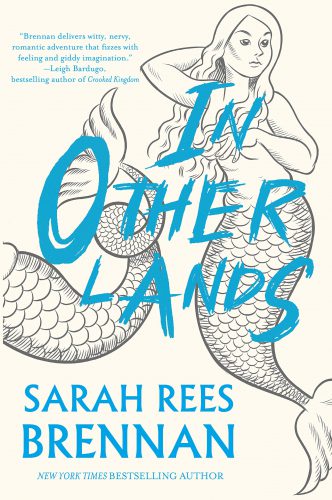 The category of “serial middle grade or young adult novel that was posted online for free but then gets traditionally published” is still rather small, but it’s produced at least one instant classic, Catherynne Valente’s The Girl Who Circumnavigated Fairyland in a Ship of Her Own Making (2011). Sarah Rees Brennan’s new book In Other Lands, a rewrite and expansion of her online novel The Turn of the Story, feels like the next one.

The Turn of the Story began as a prequel to a short story that Brennan published in the anthology Monstrous Affections (2014), “Wings in the Morning.” That story was told from the perspective of teenage Border Guard cadet Luke Sunborn; its events overlap with approximately the final ten percent of In Other Lands, which is told from the perspective of Luke’s partner, the obstreperous, sarcastic and determined Elliot Schafer. For formal publication, the story has been lightly edited, with some parts condensed and others—particularly the final part of the book—expanded. All these changes make the story even stronger.

It isn’t just that Elliot is not the normal type of kid who finds their way to fantasyland; it’s that Elliot himself is aware of this fact. The border is an invisible and magical barrier between suburban England and the world of elves, dwarves, mermaids and other magical races, with humans thrown into the mix for good measure. At thirteen years old, Elliot and his classmates are brought to “‘a random field in Devon, England.’ Much like any other random field in England” (p. 1) to test which of them can see the wall between the worlds. Elliot does, and because he doesn’t have anyone at home to miss him, and because he wants to see mermaids, he decides to stay. As readers of the story and online novel are already aware, he quickly meets and becomes friends with elven maiden Serene-Heart-in-the-Chaos-of-Battle, who’s flouting the conventions of elven society by training with the mixed-species Border Guard, and Luke Sunborn, the youngest scion of the legendary Sunborn family: “The whole Borderlands speaks of the Sunborns, the laughing warriors, singing through battle and dancing through fire, the lovers who ride away” (p. 418), as an elf warrior puts it when propositioning Luke for a threesome several years later.

Both Luke and Serene, in their different ways, struggle with the expectations of their families and Borderlands society; both are, if not quite black sheep, don’t quite fit the family mold. Doubtless this is why they decide to be sword-sisters, to use the elven term, which causes total consternation amongst Serene’s relatives because Luke is a boy. Elliot doesn’t really have a family, as his mother is gone and his supremely disinterested father barely notices whether he’s around or not; instead, he struggles with becoming a socially functional human being. Above all self-aware, Elliot himself acknowledges that he’s starting at a deficit, and the genius of setting the novel from his perspective is that the behavior that Luke finds incomprehensible, frustrating and, yes, attractive from the outside makes total sense inside Elliot’s head: “He didn’t quite know how to say, I have the opposite of a soothing personality and only ever upset Luke and I should probably be kept away from everybody and put in the cruel-repartee dungeons” (p. 268).

The other benefit of that perspective shift is that when Elliot realizes that he has been perceiving things in a totally different way than other people, or that he may be missing some crucial information about a situation, it can be pretty funny.

“People are awful everywhere,” she told him. “Not just kids. Everyone. They tell you people outgrow it, but they don’t. Everywhere you go, you see dynamics just like the petty gangs of youth. Which isn’t to say that school is not a very special hell, as people haven’t yet learned to hide how awful they are.”

“I don’t have a special table,” Elliot protested.

In Other Lands isn’t the most action-packed novel I’ve read, but what it lacks in pulse-pounding plot points it more than makes up for in character, wit, and heart. Elliot’s struggle to learn to not be an asshole is vividly portrayed, and it’s made all the more compelling because it’s entwined with his quest to understand the politics of the Borderlands and the Border Guard, which has steadily become more militaristic and paid steadily less attention to the councilors who are nominally meant to be counterparts to the warriors. A confirmed pacifist, Elliot joins the councilor track, and his increasing ability to understand and to affect the diplomatic situation amongst the various species in the Borderlands goes hand in hand with his learning, slowly and painfully, to become a better person who can relate to people without totally, unintentionally alienating them.

On top of this, there’s quite a lot of sly commentary on various fantasy tropes, particularly in the character of Serene, who comes from the kind of unthinkingly matriarchal society that trolls on the internet rail about. Her ideas about gender roles are a hilarious contrast to those of the humans around her, but they’re also a pointed reminder of the idiocy of all such essentialist ideas and their deployment in lazy, stereotypical fantasy worldbuilding:

“Despite the fact that he is a warrior, he has a beautiful warm nature,” Serene remarked. “Manly and nurturing. I think that he is such an excellent choice for Luke’s sweetheart. I could wish he had a slightly more broadminded attitude towards elves, but I think he is improving, and besides, men can be rather prejudiced sometimes, bless them.” (p. 378)

Brennan also takes quite a few shots at the fantasy tropes, circulating since Narnia, about the kind of kids who willingly walk out of our world, and the kind of attitudes people in fantasyland have to them: there’s a bit of Eustace Scrubb in Elliot, and the narrative makes clear that he has some good points about the Border Guard, which is essentially training up child soldiers. To his credit, Elliot realizes this, but he can’t stop what the reality of war does to his friends—so naturally, he decides to stop war in the Borderlands altogether. And to Brennan’s credit, Elliot explicitly considers and reconsiders his choice to stay in the Borderlands repeatedly over the course of the book, and is also explicitly aware that staying in the Borderlands during the equivalent of high school—since time passes at the same rate between the two worlds—is steadily decreasing his ability to reintegrate into the normal world, regardless of his desires.

I’ve been a fan of Brennan’s books since her first published novels, the Demon’s Lexicon trilogy; I particularly liked her last book before this one, Tell the Wind and Fire (2016), a magical Tale of Two Cities retelling set in New York. Brennan also wrote quite a lot of very popular fanfiction before launching her traditional publishing career, and in some ways In Other Lands feels like the platonic ideal of a book that unites the strengths of fanfic and professionally published works: it has the character focus, skillful dialogue, and sheer pleasurable wallowing in a world with beloved characters that typifies a lot of good fanfic, but these traits are anchored to enough of a scaffolding of plot—Elliot and his friends growing up and changing the Borderlands, slowly but surely—that the book never feels like it’s meandering for the sake of meandering. Equally importantly, and in Brennan’s trademark style, it’s quite funny. But while in some of her earlier works all the characters spoke with the same sort of clever wordplay and punning wit, In Other Lands achieves a great deal of its humor by putting characters with very different patterns of thought and speech in close proximity, to hilarious results.

Take, for example, this exchange that takes place in a class when Elliot and Luke are fifteen:

“Can I speak now?” Luke asked. “It’s not so much of an answer to a question as a personal announcement.”

Elliot glanced over at him. Luke looked a little pale under his tan. Elliot wondered if perhaps Luke needed to go to the infirmary and felt guilty about talking so much. People’s stupidity could always be corrected another time.

“I’m—I like guys,” said Luke, staring at his desk. “Romantically.”

Elliot put his hand up so fast he almost dislocated his arm. Captain Whiteleaf was staring and nodded, possibly on stunned autopilot.

“Since when?” Elliot demanded.

Luke put his hand back up. “Since always.”

Elliot put his hand back up in retaliation. “That’s absurd.”

Luke put his hand up and waited for Captain Whiteleaf to nod and say apprehensively: “Er…Cadet Sunborn…is this going to be a question?”

Above all, In Other Lands is a novel about growing up and growing into oneself, a task that is ultimately more difficult than dealing with unicorns or negotiating treaties with harpies. On top of his conscious quest to become a decent human being, Elliot also deals with his own bisexuality, and in some ways more importantly, how those around him react to it. While no one in the Borderlands gives him much trouble for liking both girls and boys, despite the fact that they don’t really have a word for it, differing attitudes towards sex and romance on the part of the elves, the Sunborns, and his fellow cadets still present some thorny problems for Elliot and his own assumptions about relationships. At the same time, not everyone back in his native city in England is a font of tolerance; his boyfriend there assumes that Elliot’s bisexuality is a youthful phase rather than a valid orientation, while his boyfriend’s formerly friendly uncle gives Elliot the cold shoulder once his sexuality becomes apparent.

That this is a book that lets Elliot be bisexual without the narrative judging him for it would be remarkable in and of itself, as the representation of bisexual characters in fantasy and YA has only started to move beyond the “evil traitors” trope, but the fact that Elliot is so cantankerous, and so indubitably himself, merely adds to the book’s appeal. Elliot isn’t perfect, and he doesn’t have to be in order to have his sexuality be treated as valid, or to deserve the love that he craves so fiercely and hopelessly.

All of this together may sound like a lot, but Brennan handles this rich mixture of themes beautifully, with charm and her usual ability to rip readers’ hearts out at the drop of a hat. In Other Lands is a willfully contrary portal fantasy, but above all, it’s a full-hearted young adult book that everyone should cross over from other genres to read for themselves.

[…] reading this review, I’ve wanted to write one of my own. It’s a good review, highlighting all of the good […]

Strange Horizons - 2017 in Review Part Three By Our Reviewers

Strange Horizons - 2017 in Review Part Two By Our Reviewers

[…] and also a book I’ve been recommending to everyone. I also read and reread Sarah Rees Brennan’s In Other Lands, which I tell people is like Harry Potter, but so much better. (So much better.) Meg Elison […]