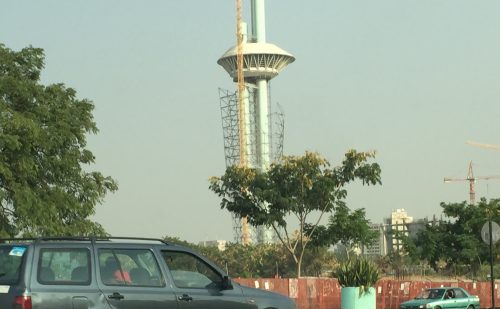 Abuja was built to be a city of the future. It is Afrofuturism solidified as roads, an international airport, planned parks, and ministerial buildings.

Abuja was my first African city, my first taste of Africa. In 2009, it was eighteen years old, a new capital city built between the Muslim north and Christian south.

It is one of the dullest places I have ever been.

You know how some people, if you do anything out of the ordinary, try to scare you out of it?

It had happened before I first visited Cambodia (“They’ll kill you.”), and before I first visited Brasil (“They’ll rob you, you’ll be found wandering naked”). So I was well prepared when they started up on Nigeria. “It was so dangerous, I had to go around with an armed guard the whole time.” Apparently I was going to be robbed, kidnapped, hounded for bribes, and tricked by fraudsters.

Imagine if you can the disappointment of finding myself in a place that was as safe and quiet as a suburb of, say, Topeka, Kansas.

I had hoped for some live music. I could find none. I think in 2009 there was only one movie house, and I never found it.

In 2009, the most exciting thing was changing my money. The street leading up to the Sheraton (where I did NOT stay—it charged what it would charge in the USA) was lined with very elegant Muslim men sitting under umbrellas with what looked like tens of thousands of dollars' worth of currency on outdoor tables. 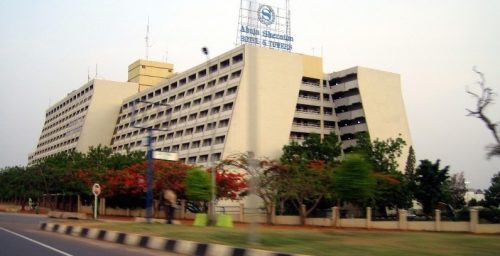 Photo courtesy of Abuja Sheraton. Rooms at US$ 238.00 a night

My cards didn’t work in Nigeria and I was going to Makurdi where they were going to work even less, so I changed several hundred pounds on the street. I ended up with a huge roll of worn naira bills that wouldn’t fit into either wallet or hidden pouch.

Even in 2009, prices in middle-class shopping malls reached my pain threshold. I tried to buy a new belt and stopped when the asking price was one hundred bucks. And it was a shop not a market stall, so there was no negotiation.

There were lovely cake shops and ice cream parlours, good restaurants, fashion boutiques, and a small art gallery. In the park at night they served tasty roast fish. Abuja is city of long car voyages, carefully preserved ravines full of trees, distant rocks that look like something landed from the moon, and government buildings. A city of parks and walls. 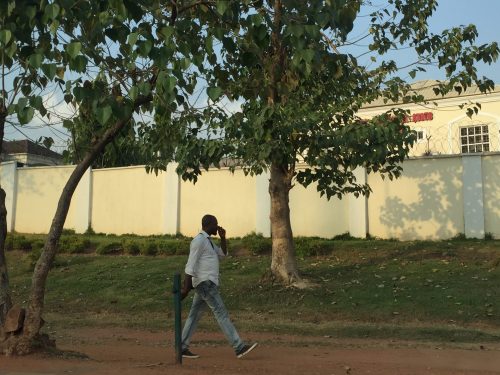 Condos and trees and walls

Everywhere there are modern, sometimes ginormous buildings. Especially breathtaking are the hugely out-of-scale National Church and National Mosque. They stand near each other as if reflected in a distorting mirror. 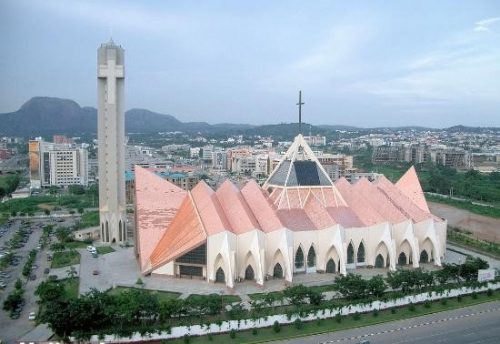 The National Church.  Note size of cars for comparison.

Every year I visited, the traffic got worse. The road from the distant airport, especially, always seemed to be being upgraded. Every year more people crowd into the surrounds of Abuja, many of them along the airport road. They create a vast hinterland of sprawl and traffic.

My worst experience with Abuja traffic was in 2015. I got up at 4.30 am to get to the bus park for Jalingo in Taraba State.

I hate bus parks. They seem to be semi-informal and to move every year. I need a friend to get me there—and to find the right beat-up van that will go to my destination. So we set out very early to make a 7.00 am bus and missed it.

At about six am the taxi drove onto a local roundabout and we stopped dead. Nothing moved in or out of it for about an hour.

When we finally got onto a Jalingo bus, it was around ten am and we had a trip across Nigeria ahead of us. The traffic on those suburban roads was still unmoving.

Life makes Nigerians resourceful. The bus driver didn’t drive on the roads at all. Instead he wound through linked parking lots or bounced onto unpaved tracks in back of the shops or houses.

But my most thrilling ride was in 2011 when I bussed back from Jalingo. My friend Victor negotiated a great price, and I got in the front seat—usually the most comfortable. It was not until we started pulling away that I realized there was no sliding door on my side of the vehicle. It had been torn off in an accident.

We drove at eighty miles per hour swerving around potholes without seatbelts or doors. At one point a fuel truck avoided a pothole by heading direct for us on the wrong side of the road. We had to drive onto the track to miss him.

Fortunately a very handsome, muscular army man was sitting between me and the driver. I linked arms with Muscles and held on. By the time we reached Abuja late at night, I was ready to propose marriage.

The flats I’ve visited in this new city are modern, clean, small, well appointed with full kitchens and bathrooms—even when there may not be any running water.

I briefly considered buying something in Abuja. The property prices stopped me dead. I checked prices for this article in June 2018. I saw a four-bedroom duplex RENTING for roughly thirty thousand pounds a year. A two-bedroom flat in Wuse was selling for a more reasonable fifty to fifty-five thousand pounds. Cheap for London—but remember, mortgages work differently in Nigeria and most people have to buy outright. 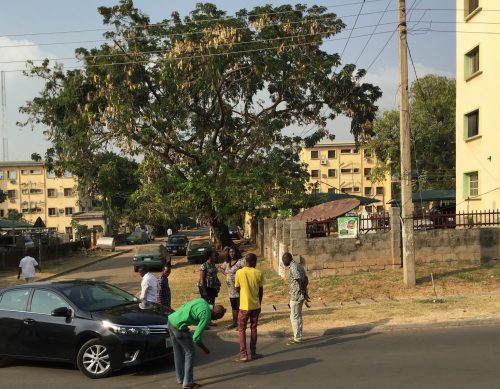 A scene outside my hotel in Abuja.

So, here I was with Chinelo and Odafe in Abuja again. I found yet another clean, modest hotel for thirty bucks a night, and we all met up our first night to go to an Abuja I did not know—an Ethiopian restaurant in Maitama amusement park.

Sadly, Maitama looked rather run-down and closed, at least for the night—so was our restaurant. We wandered in the warm night past darkened attractions and one box full of light, a barbershop that was open. A young man ran out and intercepted us. “You were at the Ake Festival!” He recognized Chinelo and Odafe, from the panels. He was of course a writer. I sometimes think there are more writers in Nigeria than there are dentists—or readers.

Abubakr Adam Ibrahim, a mainstream writer Chinelo Onwualu introduced me to in 2015 and the winner of the hugely lucrative Nigeria Prize for Literature, worked for years on a national newspaper in Abuja. I get the impression many more potential writers work in Abuja’s government and media jobs, drive its many ring roads, or think of it as a vision of the future that is very far from having gone wrong. 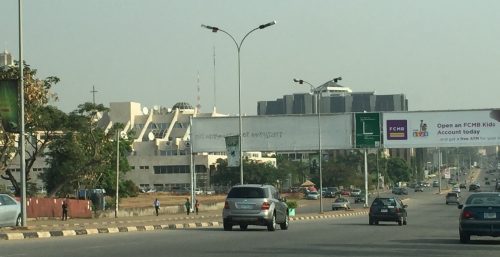