You may not have heard of Eko Atlantic. It’s a huge new development, raising a new landspace from marsh and ocean. It is nicknamed “The Great Wall of Lagos.”

The idea is that it will rival developments like Dubai, and make Lagos an oceanside tourist destination. It will also provide new luxury accommodation for the Lagosian elite. And it may further divide the city-state from itself. 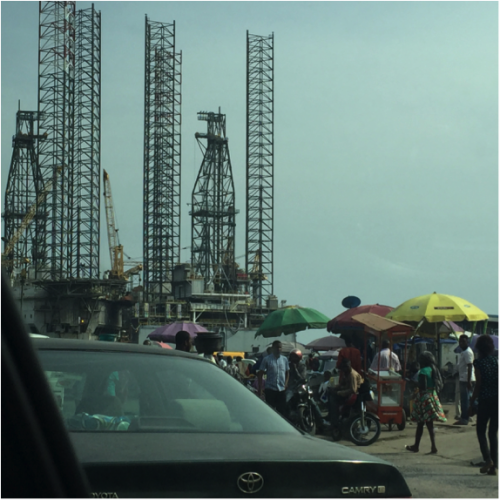 On the border between Lagos Island and Ikoyi

Amatesiro Dore can accept a Nigerian identity even though Nigeria is an outcome of colonialism, created by the West without asking the people there what they wanted. “But my blood is Itsekiri,” he says, referring to his ethnic identity. He has experience of being a privileged Nigerian leaving the islands, then crossing to live in relative poverty in a district called Ago. And he is an out gay man. Even now many believe that homosexuality is either demonic or something imported from the West.

The new suburbs along the Lekki peninsula

Nigeria is a country divided between North and South, Muslim and Christian, queer and straight, male and female, desert and forests and plateaus and coastlines. It speaks three hundred or four hundred languages—or is it 700?—each language embodying a different culture.

These two interviews touch on many of those divisions—between West and Africa, between pan-Africans and localists, among the nation’s many great religions.

There are many great walls of Lagos. 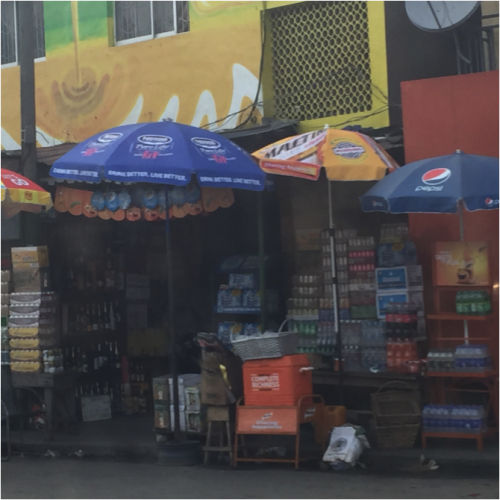 And yet Nigeria is also one of the most optimistic and hopeful countries. Nigerians really do believe that things will get better, that they will come through OK, in a way that maybe westerners don’t.

I remember being stranded in Jalingo, Taraba State, during the fuel subsidy strike in 2012. There was no petrol. There were shortages of food. I had no way of getting home and no way of getting any further cash as all my budget for the trip was being spent. How would I get back to Abuja with no money? Could I get a flight with all the airports closed?

I was in despair. A female student smiled, shrugged, and said. “Oh we’ll get through this, we always do.”

I remember talking to my head of department at Taraba State Uniersity. A Fulani, he was about to do a postdoctorate on the Hausa language at a university in Istanbul. I was amazed to learn from him that Fulani and Hausa are unrelated languages from different language groups. ‘But everyone thinks of the Fulani and the Hausa as almost one people. How do you get along so well?’

“Oh,” he said with a smile. “We have shared the same ground for so long.”

Would that the West had ever learned that lesson. Despite or perhaps because of that diversity, I find Nigeria to be one of the most civil and friendly countries I’ve visited.

These interviews for whatever reason talk about things that divide. And how literature through empathy and truthfulness opens gates. 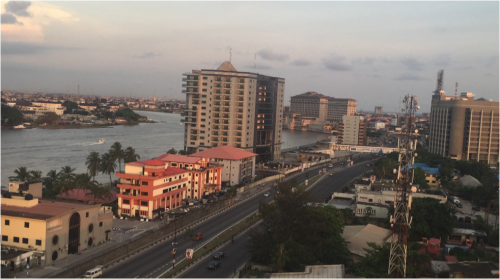 Like Loading...
© Copyright 2019 By: Geoff Ryman
About Geoff Ryman
Geoff Ryman is Senior Lecturer in School of Arts, Languages and Cultures at the University of Manchester. He is a writer of short stories and novels, and science fiction and literary fiction. His work has won numerous awards including the John W. Campbell Memorial Award, the Arthur C. Clarke Award (twice), the James Tiptree Jr. Memorial Award, the Philip K. Dick Award, the British Science Fiction Association Award (twice), and the Canadian Sunburst Award (twice). In 2012 he won a Nebula Award for his Nigeria-set novelette "What We Found." His story "Capitalism in the 22nd Century" is part of Stories for Chip, edited by Bill Campbell and Nisi Shawl and published by Rosarium.
No comments yet. Be the first!