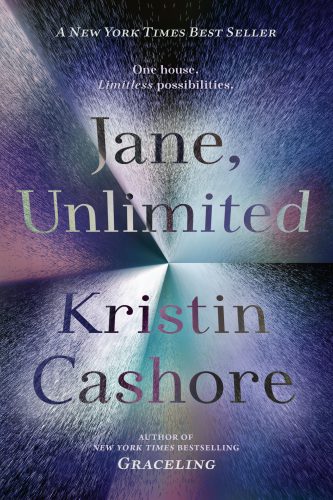 It’s fair to say that the expectations were high for Kristin Cashore’s first novel since her blockbuster Graceling Realms trilogy of books, particularly since it’s been five years since the publication of the final volume, Bitterblue (2012). Cashore’s new novel, Jane, Unlimited, is a total departure from her previous work in some ways, but it has a lot of the same problems that Bitterblue did, and its unusual story structure means that it also has some problems that are all its own. Nevertheless, it’s still an enjoyable and unique read, with enough typically Cashore touches to make it worth reading, even if it is frustrating at times.

The basic setup is this: in a world that appears to be (but, one eventually realizes, actually isn’t) our own, listless college dropout Jane decides to accompany her older, rich friend Kiran to his family’s private island for a house party. She does so primarily because her dead aunt Marigold once told Jane that she should always accept an invitation to Kiran’s family mansion, Tu Reviens. Once there, Jane meets a very friendly basset hound and a collection of people who are by turns intriguing and infuriating. At a certain point in the story, the narrative breaks into four succeeding sections, each of which spin out a different turn of events that Jane could or did take and that could or did send her life into very different directions:

A bell rings somewhere in the depths of the house, sweet and clear, like a wind chime.

While the book’s pre-publication hype talked up Jane, Unlimited as an homage to Daphne Du Maurier’s Rebecca (1940)—the sour housekeeper Mrs. Danvers is a clear tip of the hat to Du Maurier’s classic novel, as are many of the names—from the moment Jane walked into the mansion, and it became clear that the basset hound was travelling through a painting into a parallel world, I found myself thinking more of Diana Wynne Jones, particularly the Chrestomanci chronicles. Not only that, but somewhere in the fourth section of the book, after the umpteenth reference to Jane’s “Dr. Who pajamas,” and around the part where I figured out that the previous references to raining frogs weren’t a weird throwaway joke but an actual meteorological phenomenon in Jane’s actual world, I realized that the pajamas were a metonym for some of the book’s problems. Particularly in the seasons starring Matt Smith as the Eleventh Doctor, Doctor Who, the television show, often had the problem of sacrificing character throughlines and emotional development in favor of dashing off to whatever shiny new world or plot gimmick the writers were distracted by that week. Frankly, it was often pretty twee, and Jane, Unlimited feels twee too.

Cashore is a better writer than Steven Moffat is a showrunner; she sells Jane’s emotional development within each section in a way that is believable and engaging. But there is a fundamental problem of each of the four “endings” in the book being in a different genre, each possessing its own complement of associated tropes. This makes the whole thing feel pretty precious. I don’t know how I’m supposed to react to the  international organization of art-thieving spies, Espions Sans Frontières, that’s being run out of the Tu Reviens kitchens—which draws in plotlines about kidnapped children, faking stories about the Sicilian mafia in New York, bioterrorism, Aunt Magnolia’s purported death on a photography expedition in Antarctica, and more—except by rolling my eyes. All of this is well before adding in those rains of frogs, or the fact that in Jane’s world Vermeer apparently was obsessed with, you guessed it … frogs.

All of that’s in just one section; the book careens wildly between space opera, fantasy (magical hounds that have a telepathic soulbond with other other being in all the cosmos!), and horror (houses that become and then eat people!), making all of them seem like pretty flimsy setups. There’s a certain suspension of disbelief required for genre fiction, in other words, and Kashore seems to be daring us to disbelieve. Well, I did: putting all of these elements in one book just makes each seem fundamentally unconvincing.

The novel’s fleet pacing—a complaint that was often leveled at Bitterblue was that its pacing was anything but—both helps and hurts in this regard, as the clip at which the narrative keeps moving means there’s little time to explore any of these concepts in the depth which would have made them seem less twee and more convincing. The best parts about the book are the characters, particularly Jane and her umbrella-making art—her trip to Tu Reviens makes her think this might be an actual career rather than an interesting hobby. Jane’s burgeoning relationship with Ivy, the daughter of one of the household staff members, is also one of the novel’s bright points, and the end-point at which the book leaves the two of them is probably the reason why I enjoyed Jane, Unlimited as much as I did.

But even that statement raises the question of the novel’s structure, and how we the readers are supposed to feel about the relationship between its structure and its interpretation. I tore through stacks of Choose Your Own Adventure books when I was in elementary and middle school; the fun of them, at least for me, was always in flipping back and forth and creating a “good” narrative through trial and error by avoiding the “bad” endings I’d chosen first. (“You wander in the maze beneath the pyramid forever. THE END.”) Jane’s stories are laid out linearly; apparently it’s not possible to pick the good elements out of each and discard the bad elements. The point of this may well be some truism about how our life is of a mingled skein, good and ill together. But it doesn’t make for a particularly satisfying reading experience, especially since the final section dives headfirst into the plot elements I found the most twee of all, namely the “strayhounds” who can speak telepathically to their soulbonded people and who travel back and forth between worlds. (Full disclosure: I like dogs, but once he started talking telepathically I found Jasper the dog—excuse me, Steen the strayhound—annoying.)

The more charitable interpretation is that, as the novel’s title suggests, the possibilities in Jane’s life are unlimited and that her life could spiral out in any number of directions after she arrives at Tu Reviens—as long as she doesn’t get the bad ending. Probably there are some readers who will find this endless kaleidoscope of possibilities exhilarating, but as someone decades older than Jane whose life course has already been at least partially set by the constant accumulation of her own choices, I found the novel’s refusal to tell a coherent narrative and stand by it annoying. We all make choices in our lives, subject to certain constraints; novelists need to make choices in their narratives too, and it seems to me that Cashore has skipped out on that duty in this book. I’m of the opinion that having at least some limits is essential to creativity—whether it’s a deadline or a budget or an editor who can be appropriately critical—and in this sense Jane, Unlimited may also be an illustration of the perils of giving previously successful novelists too much free rein in their succeeding projects.

Cashore’s books so far seem to fall into two rough categories: Graceling (2008) and Fire (2009) are both YA fantasy featuring female protagonists ambivalent about their magical gifts, and they’re more like each other than not. As much as I loved Graceling, Fire is actually my favorite of Cashore’s books, and in many ways it perfects what made Graceling so popular. While superficially dissimilar, Bitterblue and Jane, Unlimited make another rough grouping, in that they’re both overstuffed with more ideas than can really be comfortably digested in one book. Jane, Unlimited solves many of Bitterblue’s problems but doesn’t retain the elements that made Bitterblue compelling, and ultimately if I had to pick between them I would definitely choose Bitterblue, which almost manages to pull off a thorough examination of how a society confronts and reckons with widespread human rights abuses within the framework of young adult fantasy. All of which is to say that Cashore seems to be on track to write a real humdinger of a novel two or three books from now. But though it is engaging, partly because it is so unusual, Jane, Unlimited is too weird to be that book.