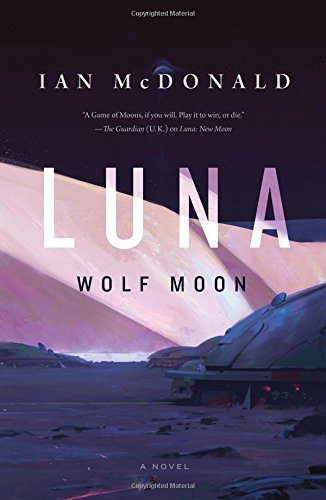 Luna: New Moon (reviewed for Strange Horizons by Matt Hilliard and in The Guardian by Adam Roberts) came out in 2015 to no small amount of fanfare, with Deadline reporting that the television rights had been sold even before the publication day. Game of Thrones meets The Godfather in the unforgiving and lethal lunar environment: a libertarian paradise where possession really is nine-tenths of the law and even the air you breathe has a price crossed with the feudal politics of five intermarried corporate families—the Dragons of the moon. This is a setting filled with dramatic potential, and it's easy to see why it would have generated interest from television production companies. Unfortunately, it doesn't work quite as well for me.

The Corta family provided the greater part of New Moon's viewpoint characters. By New Moon's end, though, the family's power had been broken and most of its members killed. At the start of Wolf Moon, teenager Lucasinho Corta and his little cousin Luna survive under the protection of the Asamoah family, while Robson Corta has been adopted by the Mackenzies who murdered the rest of his family—and who're prepared to give him over to sexual abuse at the hands of Bryce Mackenzie, one of the sons of the ancient Mackenzie patriarch.

Of the adult Cortas, lawyer Ariel survives in poverty, attended by Marina Calzaghe (an Earther  who is fast approaching the day when she has to decide whether or not to go back), while Wagner Corta, the family's black sheep, runs a salvage crew on the lunar surface. Lucas Corta is universally believed to be dead. He's not. He's doing something no one born on the moon has ever done before. He's going to Earth, to cut the deals and do the kind of political manoeuvring he's good at; the kind of political manoeuvring that will let him overthrow the toothless Lunar Development Corporation and avenge his family—setting himself up as essentially the ruler of the moon.

In some ways, Wolf Moon feels more like a sprawling family saga than the tightly intricate political/corporate/criminal thriller that was New Moon. Here there is no instigating event, like the assassination attempt in New Moon, that unfolds into an escalating series of crises. Rather, Wolf Moon deals with disintegration and with consequences: the disintegration first of the Corta family and the consequences of their fall from power, the disintegration of the Mackenzie family into warring factions, after an act of malice destroys their main family holding just like they destroyed the Cortas' family seat, and the disintegration of all the old norms and certainties on the moon, as Lucas's plan unfolds. The moon has seen feuds and assassinations and ambushes on the surface and in tunnels, but what it's never seen, before now, is war.

This is a book with numerous viewpoint characters. Young Robson, freerunning in the cities of the moon, is dealing with trauma and powerlessness in his own way, while Lucasinho deals with it through sex and baking, clinging to his lover and protector Abena Asamoah in so many of the wrong ways. Ariel Corta takes on family court cases, watched over by Marina—who has put all her own needs aside to keep Ariel safe and comfortable—at least until Ariel is retained as personal counsel by the chair of the LDC. Wagner Corta, with his dark and light halves—bipolar syndrome, which some people on the moon have developed into a werewolf subculture—is trying to keep Robson safe and also fulfil his other responsibilities. Lucas is determined to survive entry into Earth's gravity, despite the chance that it will kill him. Alexia Corta, one of Lucas's Brazilian cousins, is ruthless, determined to gain wealth, and willing to do anything because Lucas has promised her … it's a pun to say “the moon,” but it's essentially true. In addition there are what seems like a dozen others among the Suns and the MacKenzies and the Asamoahs, the movers and shakers of the moon.

McDonald is extremely good at depicting a vivid world, filled with vivid and believable characters. This is a future inhabited by many different sorts of people, with many different attitudes—there is, for example, an interesting argument between Ariel Corta and youthful political science student Abena Asamoah about the applicability of democratic systems of government to the lunar environment—and most of the major players on the moon are descendants of people from Russia, China, or the global south. The world feels weird enough and lived-in enough to be plausibly real (even if the economics don't really seem to make sense). McDonald writes about killer robots racing over the lunar surface and interpersonal tension with equal aplomb.

But ultimately Luna: Wolf Moon presents me with the same problem that its predecessor did. It's filled with interesting people. But they're all either adolescents, with adolescent ways of dealing with the world (Robson, Lucasinho), or in many ways they're really just terrible people. Ariel Corta appears to possess a very well-developed personal selfishness (her codependent and verbally abusive relationship with her personal assistant and bodyguard Marina was so unpleasant that I cheered when Marina finally decided to go back to Earth) that's matched by her political ambition, but she's unusual for a Corta in that she seems to see the moon as a society rather than an atomised collection of individuals or the playground of feuding families. Lucas Corta's selfishness is of a different order: in his quest for revenge and to restore the status of his family, he's willing to kill hundreds and destroy the existing modus operandi of lunar society. His choices put his remaining relatives in danger of death as a side effect, but he's still willing to quote, “Family first, family always,” to his sister Ariel.

Wagner is perhaps the best of them, struggling to take care of his responsibilities to his nephew and generally not being an asshole. In a novel filled with power-hungry bastards, screwed-up teenagers, and people making terrible life choices, he stands out.

Don't get me wrong. These are deeply compelling characters, despite—or more likely because of—their human flaws. But I find books whose main concerns are human selfishness and ambition—whose main concerns are the ingredients of tragedy, without the catharsis of a tragic consummation—to be very tiring to read. And that's the feeling Wolf Moon left me with: weariness and the anticipation of disaster.

It's a good book. I wouldn't say I liked it. I'll probably read the sequel.

Like Loading...
© Copyright 2017 By: Liz Bourke
About Liz Bourke
Liz Bourke is a cranky queer person who reads books. She holds a Ph.D in Classics from Trinity College, Dublin. Her first book, Sleeping With Monsters, a collection of reviews and criticism, is published by Aqueduct Press. Find her at her blog, where she's been known to talk about even more books thanks to her Patreon supporters. Or find her at her Twitter. She supports the work of the Irish Refugee Council and the Abortion Rights Campaign.
No comments yet. Be the first!