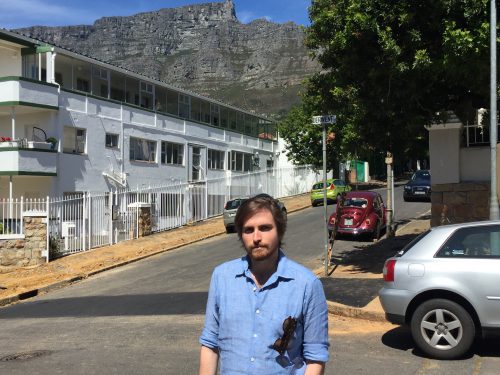 I was alive. I was dead. That’s as much as I knew.

I want to tell you I woke, but I don’t think I was ever asleep. I had passed through. Or something. There’s no way to explain it, unless it were to happen to you.

I was disappointed at first that I couldn’t walk through things, that I wasn’t a ghost. I could still feel the brush of fynbos beneath me, the grit of rock against my skin. I expected to see blood, a crater, an outline of dust around where I landed. I expected to see a rope halfway up the cliff, worn through, in frays, dangling in the wind; or a cracked helmet someplace, and a chalk bag somewhere else. I looked to my hands, no longer calloused, left with no trace of chalk. I had no bruises, no bones protruding from my skin.

The sky was blue, but not a blue I had ever known before, hanging over the careering vistas of Silvermine, with the green and the scrub and the haze and the ocean, unfolding and gathering and foaming and all of it–just the same as it was before. Then I turned. The cellphone tower was gone. The buildings were in different configurations, but in which ways, I couldn’t quite be sure.

Eagles circled above me. Jet streams scarred the firmament of a world silent and full. In that moment, I was glad.

Driving back from this interview in September 2016 to drop me off at my BnB, Nick Mulgrew showed me a statue of Louis Botha, the first Prime Minister of the South African Union, and a General of the Boer army who fought against the British. A month later I saw it surrounded by police cars and protestors. By then the RhodesMustFall movement had evolved into FeesMustFall but the statue was still controversial. 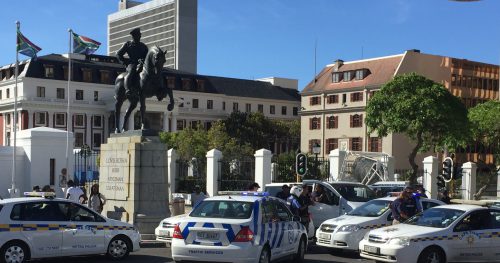 It was one of the locations for Nick’s story ‘Stations’, in which the spirits of such people stand in place of their statues to explain, to atone.

Nick: “Unconsciously, ‘Stations’ tapped into a zeitgeist. People assume I wrote this story in response to RhodesMustFall, but I wrote it before the Fallist moment as such. It was published in Terra Incognita; the day of the launch of that book in 2014 was one of the first of the RhodesMustFall protests, which a number of my friends were heavily involved with. I gave a reading at the Book Lounge that day, and it was pretty eerie to talk about living statues on a day on which the statue of the arch-colonialist became a flashpoint.

“The people who are the architects of the colonial and apartheid projects–in real-life Cape Town, there are statues of these people, which are put on display.

“This is a commemoration which is tacitly one of approval. In the Cape Town of ‘Stations’, these people are likewise physically put on display, sometimes in the same places as their real-life statues. The impulse for this is more for condemnation and recognition than their commemoration.”

I asked if he considered himself a speculative fiction writer.

Nick: “I’ve only just begun to identify as a writer, never mind any specific kind of writer. With regard to speculative writing, sure, most of my stories do have some kind of . . . I struggle to define it as speculative, but there is some kind of spiritual fomentation happening under the narrative.

“For example, the protagonist of ‘Stations’ is dead. He dies rock climbing in a national park just outside Cape Town. After he dies, he realizes, ‘Oh, I’m still here.’ He’s died, and he knows he’s died. He feels a vague need to go back into Cape Town because he figures there might be someone or something there who can explain what’s happening to him. The protagonist thus acts as a kind of cypher for this afterlife.

“Cape Town is a city that was founded on the back of slavery and the colonial project, that has physically and psychically been whitewashed. The city that the protagonist encounters in ‘Stations’ is a version of Cape Town in which that awful history is visible and can be viscerally interacted with.

“I’ve been in Cape Town for seven years now and I still feel odd here. Especially compared to Durban, where I grew up, which has a more integrated society. This is a thing ‘Stations’ touches on–wherever we are in South Africa, groups of people grow up separately from each other and live separate lives. In effect, different experiences, different dream worlds, and different worlds of experience are all superimposed onto one geographic space. When I consider my writing– whether speculative, semi speculative or realist–is how all these parallel worlds work in this geography. When do they accidently touch? Where is that rupture? That’s generally where the dramatic thrust of my short fiction comes from.”

‘Stations’ is the title story of his premiere short story collection. Stations was published by David Philips, a literary house with a long, distinguished history. It was long-listed for the Edge Hill Prize in the UK, and a story from it, ‘1-HR-FOTO’, won the Thomas Pringle Award.

Nick: “Stations–the book–is a suite of 14 stories, thematically linked to the Stations of the Cross. They are mostly realist, looking at dislocation, familial strife, youth–middle class-ness in South African middle cities. I write about places that aren’t popular settings for fiction, like Durban, Port Elizabeth, Grahamstown. A lot of fiction in South Africa is set in the Cape or Gauteng or in assorted paint-by-numbers dorpies out in the countryside.” 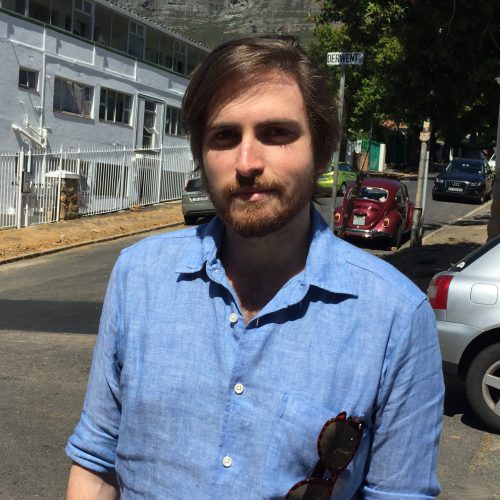 Nick is the son of an English couple who migrated to South Africa. Alongside Rachel Zadok he sits on the board of Short Story Day Africa, and he edited the SSDA anthology Water (2015). In 2016, he was just finishing up his graduate studies at the University of Cape Town. On the day I interviewed him, UCT, like most universities in South Africa, was in uproar, and this was a crucial point in the protests.

Nick: “We’ll see what happens. UCT is supposed to reopen tomorrow. It’s been closed for two weeks, which makes things tense for students, for faculty, for the protestors. It’s a weird limbo.”

“Students are protesting in support of free education and the decolonialisation of the university. Students and staff are in danger of being injured in confrontations between students and private security. Property is also being damaged. Neither student leaders or UCT management are willing to compromise at the moment to solve the impasse.

“But like many things in South Africa, it’s very much the long-term fault of government. Historically our universities have been contested spaces and sites of oppression, yes, but our current government has omitted real engagement with the current problems facing both institutions and students.

“Universities have some power in changing certain things, but not enough to fix the problem by themselves. So the government is leaving universities like UCT to, in a sense, fight it out against their own students. The partially-powered against the disempowered. Neither can win.

“Some universities around the country are threatening to impose zero-tolerance policies, which effectively means there will be more security on campuses, which means things could get ugly. In the context of UCT, I fear that, if there’s a protest tomorrow, security will come down indiscriminately. Even peaceful gatherings might be suppressed.

“This all serves to obfuscate the main issues, chief among which is free education. This moment is a push for accessible tertiary education for all who qualify. But there’s also a parallel push for the project of decolonisation, which means different things to different people and different groups, to the point that, in the hands of some, it becomes an almost meaningless thing to which people ascribe any and every issue.

“A lot of people see South Africa as this inexplicable place. Likewise, the decisions that people make, the societies formed by people, both black and white. They’re very explicable, though.

“In my work, I spend time unpacking the decisions people make, and why people do certain things. How do systems of racism or sexism, or other -isms, replicate– not through intentional indoctrination–but through people’s daily lives and thoughts and interactions? A lot of my characters do terrible things, but they wouldn’t think of themselves as bad people.

“To go back to student protests, for example: a lot of people have been saying that certain protest actions–like burning paintings or interrupting examinations– are inexplicable except in terms of wanton destruction or disruption.

“Sure, people’s actions might be hypocritical, or uninformed, or difficult to understand, and that’s a matter of opinion or perspective and engagement. But to insist that people’s actions and thoughts are inexplicable, that comes more from a failure of empathy on the part of the viewer, or from being lazy. I cannot let myself fall into that temptation, of being emotionally and politically lazy, either in my life or my work.”

Since this interview, the universities in South Africa have reopened, though student demands have not been fully met. Nick graduated with an MA in English Language and Literature. He’s about to launch a new collection of short stories The First Law of Sadness.

Like Loading...
© Copyright 2017 By: Geoff Ryman
About Geoff Ryman
Geoff Ryman is Senior Lecturer in School of Arts, Languages and Cultures at the University of Manchester. He is a writer of short stories and novels, and science fiction and literary fiction. His work has won numerous awards including the John W. Campbell Memorial Award, the Arthur C. Clarke Award (twice), the James Tiptree Jr. Memorial Award, the Philip K. Dick Award, the British Science Fiction Association Award (twice), and the Canadian Sunburst Award (twice). In 2012 he won a Nebula Award for his Nigeria-set novelette "What We Found." His story "Capitalism in the 22nd Century" is part of Stories for Chip, edited by Bill Campbell and Nisi Shawl and published by Rosarium.
2 comments on “Nick Mulgrew”
Strange Horizons - Mia Arderne By Geoff Ryman

[…] end of this article. We talk about IT, The Matrix, and Toby’s biography. Toby’s parents, like Nick Mulgrew’s, emigrated from the UK. He lived in Cape Town, where he went to high school and then to the […]